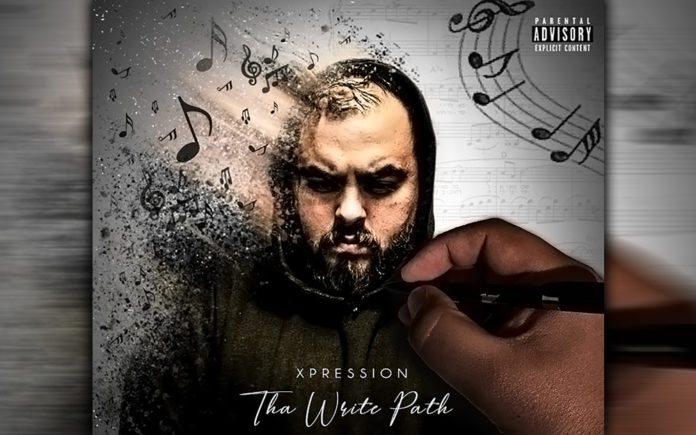 There’s no hiding from it. The Write Path is the high-profile “features” album of all “features” albums. The new maxed out record from Coachella Valley native Xpression spotlights some of the biggest names in Rap and Hip-Hop today. It’s a hit list of artists that Xpression does not shy away from by adding his signature cadence and rhythmic lyrical compositions. Bolstered by the assistance and participation of other desert natives, Ronnie King and Ckeelay, Juan Carlos Fajardo, Jr. is shot out of a cannon and has infinitely made his mark with this highly ambitious and completed piece of art.

Fajardo has steadily remained open about the physical, emotional and spiritual challenges he has experienced in his life, that is witness to the openness, love and encouragement he has from his family, who are towers of strength within the community in which he lives.

It’s go big or go home for Xpression. He holds his own here and possesses the thickest set of musical armor in the performances of all his guest artists. The armor is not meant to protect him, but to display a show of force.

“In the beginning…”. A great first track. In a way, a Book of Genesis for the album. “Lil’ Ripsta’s” rapid fire lyrics form the nucleus of the energy from the intro track. Bizzy Bone is the youngest member of Bone Thugs-n-Harmony and is faultless here. Xpression follows suit nicely by advancing the supersonic baton.

More of a fear-based tempo that is reminiscent of an 80’s horror soundtrack. The rap content from Locksmith, Julius and Xpression is a progression of slow burn. “If they try to fuck with us, they better watch out, got the rap game on lockdown, if anybody crosses my path they getting shot down”.

Slower tempo. Emphasized on this track are Philly rapper Cassidy and West Coast artist Jag. Murder here is lyrical in nature. The beat and keyboard melody complement each other G-funk era style.

The fourth “Popular Track” on the album according to iTunes is this hard hitter. Xpression’s flow shines here. The rap game requires thick skin and this song reinforces the need to heed that it’s a tough ladder to climb.

LBC Slaughterhouse member Kxng Crooked & Cyhi The Prynce impress that they are alive and well. The song has meaning, feeling and soul. In 2006 Nas said that Hip Hop Is Dead. Xpression stomps out the notion with his killer verse.

The song will be popular in dance clubs with that intro. Ckeelay has a syncopated delivery that is easily recognized. That nonsensical and untrue talk can be misleading and deceptive. The bullshit is best left behind.

An apocalyptic piano intro and outro. The hook is haunting in the fullest sounding track thus far. The instrumentation and orchestration are of prime production. The Bronx-born Chino XL shows why Rick Rubin signed him to his American Recordings label in the mid 90’s.

The first track featuring The Grouch. He reels off, “I want to live love…tell me how we get to be a big enigma…look what we did to us…how we gonna fix up everything we mixed up?” As individuals we can be puzzling to understand.

M.R.G.’s two of three tracks he’s featured on. Laid back tempo a la the “gangsta lean” where you’re driving holding the wheel while leaning to your right bobbing your head to the bumpin’ beat. The song describes the perils of social media and the false realities that can be mistakenly relied upon.

Detroit export Bizarre, youngster Castro Escobar and Expression extol the tales of waking up in the morning next to an independent and confident woman, tongue-in-cheek of course.

#2 for Kxng Crooked. Similar to the way this album was approached, Xpression reaches for the sky and accomplished that here. “We going straight to the top”.

Another inspirational song that encourages self-improvement. Millie Millz talks about making moves and paying dues. Keep it going has that Urban contemporary feel defined by R&B and Soul. A song with real broad crossover appeal if Xpression decides to release as a single.

That reminder that we all need to be ourselves in anything we do and with anyone we encounter. We must stay true and be willing to learn.

The song starts off with the sounds of a scene all too familiar on the streets across America, sirens and outcries of harassment and police brutality. Xpression uses his platform to share the message to stop the violence all the way around.

A joyful beat and uplifting synth part. Oakland-based Zion I aka Zumbi and Xpression talk about what they have given up in order to advance themselves and build a legacy their younger generations can emulate. The singing from desert beauty queen Vasti Gabriella is the cherry on top.

TRQS provides that 90’s vocal vibe that’s sensual and soothing. Oakland artist and founding member of The Living Legends, The Grouch, is humble in his delivery of a vocal that feels like a conversation with his lost loved one. Xpression follows with his own ode to family who have passed on.

With the adorable voice of his daughter presenting the title track, The Write Path is a synopsis of his challenges backed by a piano run that sounds very familiar. His father breaks it down in prayer, so that “JC” is reminded that there is a Higher Power at work and that it is absolute.

The supportive and positive words from his mother will resonate with any person doing their best to make their parents proud. Mom unequivocally shows why Xpression has no reluctance in “expressing” himself.

Check out Art of the Flow