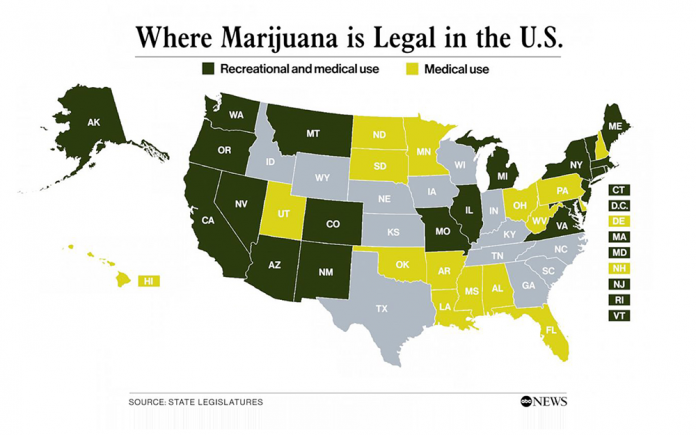 The election pundits are talking about the “Dobbs effect.” The silent response by young voters, to the Supreme Court decision on abortion, turned the red tsunami into a red mirage. I am suggesting there will be a silent cannabis effect in the 2024 election. Polls conducted by Fox News of voters and non-voters showed some interesting dynamics. Let me point to some progress in the 2022 elections paving the path to reform.

Voters opted to pass their ballot measure, with 65.5% of voters in favor. Adults in Maryland will be allowed to possess up to 1.5 ounces or two plants.

Missouri approved a constitutional amendment with 53.1% of voters in favor of the measure. Amendment 3 “remove(s) state prohibitions on purchasing, possessing, consuming, using, delivering, manufacturing, and selling.” It also releases all incarcerated individuals, paroled individuals, and individuals on probation for any nonviolent marijuana-related crimes. Criminal records and civil records for nonviolent marijuana-related offenses will also be expunged.

A poll released in September found that two in three Pennsylvania voters say they support marijuana legalization. With a Democrat Governor and Assembly 2023 looks to be a good year for approving adult use cannabis.

In South Dakota, a red state, voters rejected an adult-use legalization measure with roughly 53 percent opposed and 47 percent in support. That’s not the sentiment poll respondents expressed, however, with the survey showing support at 57 percent and opposition at 43 percent.

The vote and poll results for North Dakota, another red state, where legalization was rejected on the ballot, are more consistent. The current ongoing ballot count shows it lost 55 percent to 45 percent, and the survey has 59 percent of respondents opposed to the reform, versus 41 percent who supported it.

Arkansas, a medical marijuana state, has a poll with 55 percent of voters saying they support ending prohibition and 45 percent opposing the reform. Yet in 2022 they rejected Issue 4, which would have legalized recreational cannabis for adult use. There are many ads that will become more prevalent in the 2024 elections cycle. View one here and here.

Texas, a red state, continues to reject even medical cannabis. However, voters in the cities of Denton, Killeen, San Marcos, Elgin, and Harker Heights decided ‘yes’ to cannabis measures. Specifically, the ordinances limit local law enforcement from making arrests or issuing citations for most marijuana-related violations. It also prohibits police in most circumstances from considering the odor of cannabis as probable cause of a crime. This will have a positive impact on the almost half a million people living in these cities. Look out 2024.

In October 2022, President Biden indicated an interest in marijuana reform. Schedule VI is designed to be a part of the solution. Gibson McKay is a pre-eminent political strategist, campaign authority, and government relations specialist. McKay helped defend the Arizona cannabis industry from predatory & punitive legislation since 2017. He is working with some of his clients to develop a framework for Schedule VI that protects medical cannabis patients, adult consumers, & existing cannabis businesses.

Per https://schedule6.org “Schedule VI solves a litany of problems for over three million American medical cannabis patients who cannot utilize Health Savings & Flexible Spending Accounts for their medicine. Rescheduling to state control allows veterans access to a diverse set of cannabis products to mitigate the effects of Post Traumatic Stress Disorder. Registered patients who use medical cannabis shall not be subjected to additional federal taxes while maintaining their Second Amendment rights.”

I believe if the Republican candidates in 2024 fail to talk about cannabis reform in Congress or their respective states, there may be a silent green tsunami of millennials.

Learn more about how to use Marijuana Without the High on the 2nd and 4th Thursday of the every month from 11 AM to 1 PM at the Vault Dispensary Lounge. Call 760-866-9660 or send comments to cannaangel16@gmail.com  We are dark on November 24th and December 22nd.