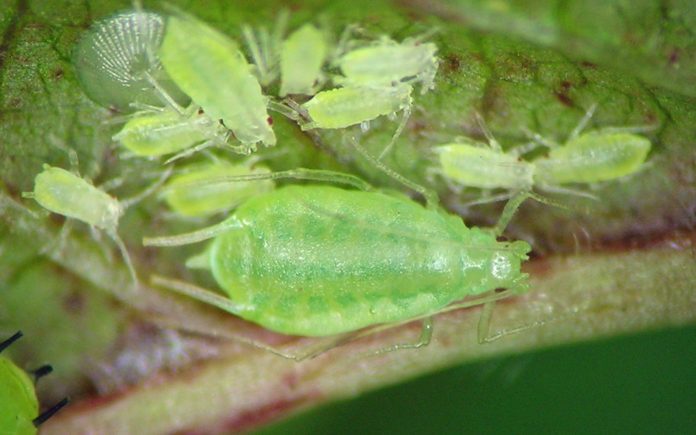 It was early 2016 in Oregon when a Portland company issued contestant entrants with a cut of cannabis from the same strain from the same source to see who could grow the best clone. One cultivator noticed a bug on his plant. He threw it out and did not think anything of it. Then he started hearing from friends that their cuts from the contest also had bugs. These are craft growers not accustomed to cultivation failures. Literally in a matter of months these little bugs were everywhere. What happened? Just like that a cannabis aphid breakout began.

Initially it was believed to be the lettuce aphid, or a peach aphid, or hop aphid. The real culprit was the Phorodon cannabis aphid first identified by an Italian researcher in 1880’s. For whatever reason the bug developed to feed only on the genus Cannabis Sativa. It is believed the contest helped proliferate the infestation. It is also believed someone transported it across state lines. It was known first in Colorado.

It became so prevalent that by the end of 2017 the Oregon Department of Agriculture declared a pest warning advisory. So where did this cannabis aphid come from. Many believe it is now all over North America and may have been smuggled into America from an African or Asian landrace strain. Landrace strains are indigenous strains that came from local areas cultivated by farmers.

Historically documents dating back to 2900 BC show cannabis has been grown around humans for centuries and cultivated for fiber, food and medicinal purposes. Migrants took the seeds everywhere they traveled to Eurasian, Middle East, and Africa. It came into The New World in 1545 AD, and Australia in 1788. Without human intervention it may have remained in obscurity. Most cannabis today are hybrids bred for their dominant THC or dominant CBD. There are over 2000 strains which can be detailed on these websites https://en.seedfinder.eu/ or http://www.weeddepot.com/strain-library

Landrace strains were cultivated and adapted to their own environment. They are considered the diamond of the strains. Today’s cannabis market is driven by the multiple strain variety customers demand. Hybridization leaves us with very few original landrace strains, but they are not lost to us completely. During the 1960’s and 1970’s growers began to collect these landrace strains to breed in our local markets. These strains are called heirlooms.

A few examples of these heirlooms are Acapulco Gold sativa from Mexico; Lamb Bread sativa from Jamaica; Hindu Kush indica from Afghanistan/Pakistan. Aside from the heirloom strains most scientist agree all strains are hybrids. We no longer have what is called a pure indica or pure sativa strain. Today products focus on ratios instead of strains. i.e. CBD:THC 1:1, 2:1, 5:1 10:1 or the reverse THC:CBD 2:1, 5:1 or 10:1.

Another difference between the cannabis consumed in the 60’s or 70’s is the components. cannabis in the 60’s was imported illegally from Columbia and was called by the slang Mexican name marijuana. It was make up of stems, leaves, or flowers, a hodgepodge of the plant. Very little of the brick packed marijuana was from the feminized flower (sinsemilla). This explains how the potency of THC was low. By the time it took to get here it was old and degraded.

The advent of hypophonic systems in the 80’s (hydroponics is a subset of hydroculture, the method of growing plants without soil, using mineral nutrient solutions in a water solvent), lead to home grown cannabis which contained higher amounts of THC. Imported cannabis came out of favor for the cleaner product grown in our own back yard. Different cultivars developed. The most revolutionary event was when growers discovered the sinsemilla was the preferred part of the plant to consume.

Strains can be user specific. To determine the strain that is meant for you smell the flower, take in the aroma, if it is pleasant for you it may give you your best relief. A good test is to ask for one gram of three different stains of flower to try. You may be surprised.