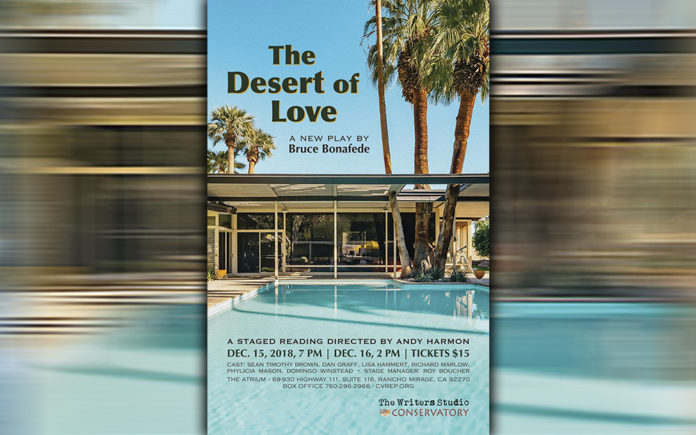 Theater– from Aristophanes The Clouds to Jez Butterworth’s The Ferryman – has been a part of our cultural landscape. The Coachella Valley is fortunate to have several theater groups – the McCallum Theater, Annenberg Theater, Coyote Stage Works, CV Repertory Theater – are just a few of the opportunities to experience theater.

The Writers’ Studio at the Coachella Valley Repertory Conservatory is adding to that experience. On December 15 they will present a public staged reading of The Desert of Love, a new full-length play by Studio member Bruce Bonafede. The reading will be the first time the group has presented such an event.

The Desert of Love is a dark comedy touching on adult themes. “It’s an entertainment on the subject of love,” said Bonafede. “Set in Palm Springs, it follows five characters – some gay and some straight – as they make their way through the challenging terrain of love in its many forms – romantic, parental, and philial.”

Bruce has been a published playwright for more than 30 years. His first produced play, Advice to the Players, won the Heideman Award at Actors Theatre of Louisville’s Humana Festival in 1985. In 2017 his play Quarantine was an award-winner in the One-Act Playwriting Competition at the Little Theatre of Alexandria in Virginia. So why this play?

“I decided to write this play because I wanted to do something fun. I had written three new plays in about a year – one full-length and a couple long one-acts – and all three were very serious, with lots of characters dying. In the full-length play I wrote before this one there are six characters and they all die in the course of the play. I thought, ‘You know, I’d like to write a play that’s fun and where nobody dies.’”

Often a play starts with an idea but the end result differs greatly. Bruce continued, “The original concept and the finished work are almost identical because I don’t start writing a play until I know how it will end. I decide what I want the audience to be thinking and feeling as they leave the theatre, and then I determine what final action will leave them with that reaction. Once I know how the play will end I work backwards from there. I don’t actually write a play backwards, of course, but when I start I always know where I’m headed, what the curtain will be. That can change in the course of the writing, but it usually doesn’t.” 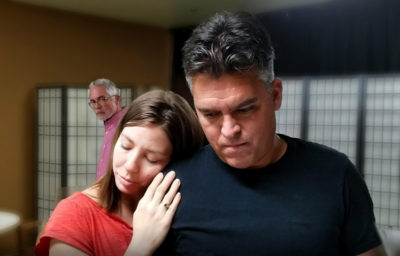 “The theatre is about collaboration – if you don’t get that or want that you’re probably in the wrong business,” noted Bruce. “I ALWAYS want to know an actor’s interpretation of what I’ve written for them. The actor, after all, is the one putting themselves out there and charged with convincing the audience. Their view matters. That said, let’s not leave out the director, who plays a rather important role too.”

Theater is also predicated on the audience reaction to the work present. An audience reaction can be unexpected. “As a playwright I’m never surprised by the audience reaction. A play isn’t an argument or debate; you’re not trying to get people to agree with you. You’re trying to SHOW, not tell. And if you show something and someone has a different interpretation, so what? It means you got them successfully engaged, what you showed them worked.”

Theater is not film. The high tech world of CGI has captivated a generation. Does Bruce feel that film negatively impacts theater? “I don’t think film, including CGI, have had a big effect on live theatre. In some superficial ways, yes – almost nobody writes three-hour, three-act plays anymore. Even two act plays are less common than they used to be. The ninety-minute, no-intermission play is becoming the dominant form, but I think that has as much to do with TV as it does with film. And some writers try to incorporate modern tech devices into their plays. But that doesn’t change the basic paradigm. Theatre is live, film is not. Each has its own power exactly because of that.”

For Andy Harmon, the founder of the Writers’ Studio, the reading has great significance. “This reading marks an important milestone for our group as we expand our offerings to valley audiences,” said Andy. “This play showcases the high quality of the work that’s emerging from our group. It’s a privilege to direct the first public reading of a play of this caliber and to have played a part in the development process.”