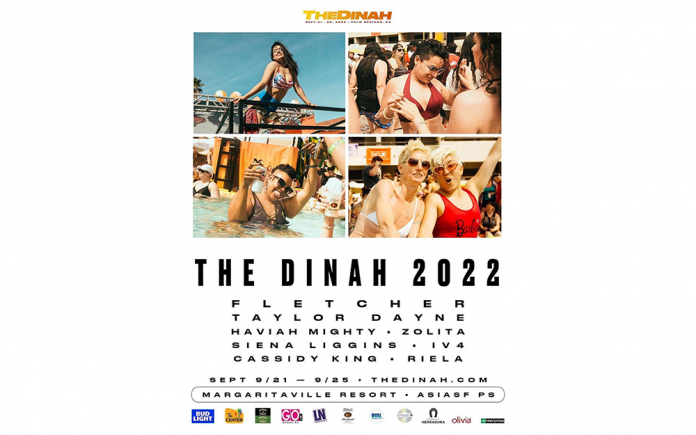 Frances “Fanny” Rose Shore, (February 29, 1916 – February 24, 1994) who later came to be known by her stage name, Dinah Shore, was a very heterosexual singer and television artist with a career spanning many decades.  She probably never imagined… and may or may not, have been so honored to know…. that her name would become synonyms with the historically largest lesbian gathering in the world.

Shore, was a longtime supporter of women’s golf and a resident of the Coachella Valley.  She owned a home in Rancho Mirage, and in 1972, founded the Colgate Dinah Shore Golf Tournament, which became one of the major LPGA (Ladies Professional Golf Association,) tournaments for women.  And where there are female athletes, lesbians are sure to follow.

It is unfortunate that 2022 was the last year the desert would host The Dinah Shore Golf tournament, (now known as the Chevron Championship,) next year it moves to Houston. Shore’s legacy will live on in other ways.

The first unofficial Dinah Shore Weekend happened in 1986 when crowds of women showed up for the Dinah Shore Golf Tournament and began to hold their own after hour parties. Throughout the 1980’s, the parties grew with several lesbian producers sponsoring events, dinners, pool parties and dances.

Palm Springs has not always been the liberal bastion that we think of today.  Throughout the decades it was a very conservative town.  Republican politicians sailed through easy elections.  It hosted the 1968 Republican Governors Conference at the Canyon Hotel, where president-elect Richard Nixon and Governor Ronald Reagan spoke alongside House Minority Leader Gerald Ford. Palm Springs was where Gerald and Betty Ford settled after he left the White House. And who can forget that Republican Sonny Bono was the Mayor of Palm Springs from 1988-1992 and the U.S. Congressman until his death in 1998.

In 1991, at the Palm Springs Art Museum, Event Producer, Mariah Hanson, hosted the official beginning of what has grown into a mega, global event.  Under her “Club Skirts Presents The Dinah,” banner, Hanson founded a movement. When this women’s festival was getting started, mass crowds of lesbians were definitely not a common sight in the Coachella Valley.

For the first decade the Dinah Shore Weekend was co-produced by Hansen and Girl Bar Promoters, Sandy Sachs and Robin Gans.  In 2005, there was a dissolution of partnerships and competing events took place for a few years until 2012 when Sachs and Gans, relocated their event to Las Vegas.

What began as initially being referred to as ‘girls gone wild for girls,’ annual lesbian pool party, has morphed into the biggest, most acclaimed lesbian event in the world.  For 5 days, lesbians from around the world pour into Palm Springs, for a global event that offers not only pool parties, but live entertainment, concerts by some of the biggest recording artists in the country, comedy shows, sport-games and social networking opportunities like none other. Lesbians, who often lack representation in the Queer Community, are center stage at The Dinah.

Mariah Hanson, whose bio indicates that she has always loved throwing parties to create a feel-good environment, brought in Nationally recognized sponsors, and has turned, The Dinah, into a platform that has mobilized the lesbian community around a multitude of LGBTQ-oriented humanitarian projects and social issues. Hanson, has teamed up with a variety of organizations and lent her support to various causes and activist movements.

The Dinah is promoted as being open and supportive of all female identified women and their allied friends. This year they are back in Palm Springs, celebrating the 31st Anniversary of the largest and biggest annual festival for queer women, September 21 through the 25th. The Event will be held at the Margaritaville Resort, (1600 North Indian Canyon Drive, Palm Springs, California.)

Headlining acts include Fletcher, Haviah Mighty, Cassidy King, IV4, Zolita, Siena Liggins and 80s music iconic superstar, Taylor Dayne.  Their promotion also indicates they will feature female pop singers, rising artists, as well as new queer talent all poised to make a major impact in 2022 and beyond.   Friday night is 80s pop icon Taylor Dayne who is exclusively bringing her full band to put on a rare and unique show for at this event.

The Dinah isn’t just a pool party for young lesbians. It’s an open and inviting female friendly musical event for anyone over 21. For tickets and more event information please visit: thedinah.com