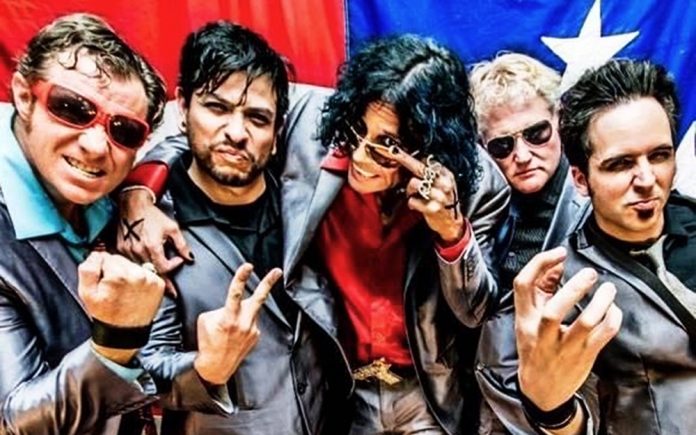 There are bands that are political and there are political bands. THE DTEASE are neither. I connected with vocalist Wilson to learn more about the pentamerous band that includes Wilson (Lead Singer), Sammy (Guitar), Josh (Guitar), Bill (Drums) and Tommy (Bass).

In 2018, they were scheduled to perform along with SE7EN4, DEATH IN PRETTY WRAPPING and MEGA SUN at The Hood Bar & Pizza but unfortunately the band had to postpone due to circumstances beyond their control. Wilson assured me that they will bring their ‘metal-bending glitter bomb from the 6th dimension’ back to the desert as soon as it is safe.

Redefining the post-millennium era of Rock music, The Dtease have managed to take all the good from 70’s Glam artists like David Bowie and T. Rex, 70’s Punk Rock like The Clash and The Ramones, 60’s Rock and Roll like The Doors and The Rolling Stones, and everything missing in the Modern Rock scene to create all-powerful icon. Dressed in sharkskin suits and fueled by frontman Wilson Gil, the band has captivated audiences up and down the California coast.

Poetic lyrics consisting of sex, politics, and well, Rock and Roll are geniusly combined with an arsenal of destructive guitar riffs, brilliant bass lines, killer drum demolition and topped by sexual performance entrapping all of the senses that reverberate with metaphorical undertones to create a weapon of sonic mass destruction. The question is, are you experienced? With a live show that cannot be beat, The DTease will leave you speechless, soaking wet and screaming for more!

CVW: What does the general public need to know about The DTease?

WG: “As far as anything you need to know about the band, we are Rock ‘n’ Roll insurgents trying to fight a war against the mundane musings of the powers that be; a weapon of sonic mass destruction, a wave of rhythm and feedback that both binds us and frees us at the same time. And it’s our job to bring everyone in the crowd into the fold. If you want to just splash around in the shallow end, shake your ass and have a good time, you are more than free to do that, but if you care to challenge yourself and swim out to the deep end, we’ll be waiting there for you. We’re like the poison pill wrapped in candy. One man’s poison is another man’s antidote. We are the ‘Rasputin of Rock ‘n’ Roll’!”

CVW: How does the political landscape influence your music and lyrics?

“You know what’s weird is that I have evolved politically, it’s not so much that Trump or Pence scare me anymore, it’s basically that both sides of the top scare me. I have come to realize after further investigation that at the top the Neo-liberal and the Neo-con agenda are the same both parties. They are the same side and all we’re really left with Is the illusion of choice. I have to say that it doesn’t really matter much who the figurehead is at the top because all the parties main players on both sides are bought and paid for by ‘big pharma’, ‘big tech’ and the military industrial complex. All I can do is try to be a good person, come from a place of love and rock the fuck out!”

CVW: To be a politician now is to be cunning and scheming, it appears, especially when the focus is on advancing one’s career. How do we navigate as a society?

WG: “You have to be those things because it’s a Machiavellian construct. You have to play everybody off of each other and you have to dodge all the questions and everyone is out for the gotcha moment. But now there really is just so much bullshit floating around everywhere on every side, people think they have power, but really, they don’t because let’s face it, the people that voted in the 2016 presidential election, the percentage was abysmal, it was like 50 something percent I think. All we have is our vote, really. And even then it’s tough, until we get some kind of meaningful campaign reform, laws and term limits on senators as well as other members. Nobody should be a lifetime senator, that’s just bullshit!”

CVW: You are so spirited when you perform. Where does your live energy come from and how do you maneuver life in-between shows in order to channel that energy on show days? 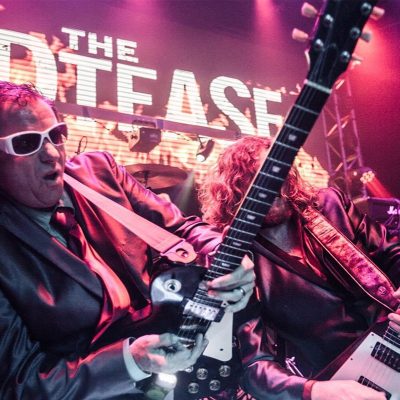 WG: “All my energy comes from the fact that we are all going to die. In my other job, I own a body removal service so I’m always on-site at car crashes, suicides, overdoses and all kinds of crazy death scenes. I take dead infants from the arms of grieving mothers and pick up severed heads off the railroad tracks. All of those people had stories and they ended, so I try to use the band and the music and the power of a group of people that all get together to share something bigger, to become one out of many ‘E pluribus unum’ with power cords. And that way I can walk between the light and the dark like some kind of crazy amplified shaman celebrating the miracle of life that is all of us on this fucking rock spinning around hurling through outer space and somehow, for a moment, we can all connect before the chaos takes us out. It’s really amazing when you think about it.”

CVW: I know Ronnie King has worked with you in the past; do you have any other connections to the Coachella Valley?

WG: “I love Ronnie King and he has been a friend of mine for a long time. He produced the first three DTEASE songs. He is our main connection to the Coachella Valley. I know some people from Palm Desert. I’ve known Nick Oliveri for a while when he joined The Dwarves many years ago. I know some other people out there too but those are the main two guys.”

CVW: If President Trump were in your audience what do you think would be his reaction to THE DTease? 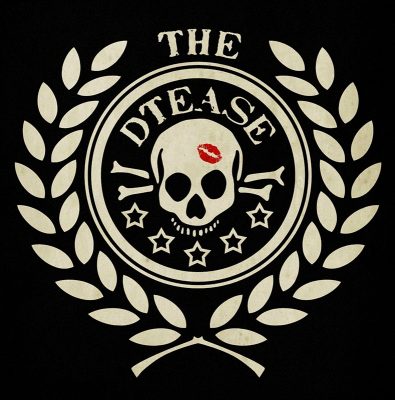 WG: “It’s funny because I think anyone could be in the audience and dig a DTEASE show but if he delved deeper into it he would find out that the things we sing about would be the end of him on a political level. The first line of our first single to be released is “Stupid Ass Whitey trying to blow up the Government!” It’s about putting all the politicians and preachers in a giant rocket ship and blasting those bitches into outer space and replacing them with love and passion. Trump doesn’t even scare me as much as Mike Pence does. They’re all just a symptom of a bigger issue. The divide and conquer theory has never been more blatantly on display as it is now.”

CVW: There’s a no-holds barred attitude to THE DTease when it comes to the subject matter of your lyrics. There’s also a facetiousness that’s purposeful. Are those fair assumptions?

WG: “Sometimes you really can’t mince words. But you can temper them with humor and that’s how you can get across to a lot more people who may laugh at first and then it actually sinks in that there’s something to think about.”

CVW: You have some innovative thoughts on our criminal justice system, what are your thoughts on how we assist the “criminal” population?

WG: “We’re all on parole. We’re all in some kind of jail of some sort and very few ever get to free themselves emotionally, sexually or spiritually. It is very hard to come out of an institution especially if you have a rap sheet. It becomes almost impossible to integrate. I’m all for punishing people. We’re taking unsafe people out of society. But the problem in our society is that we use jail as a for-profit system and legislate morality and wind up making innocent people or people that are really not hurting anyone into criminals and once they have a felony conviction it narrows the scope of their futures. No good can come of that. I believe there are some people that are vicious, that are beyond rehabilitation. You have incredibly selfish people and then there are people that are a victim of circumstance that genuinely have a chance at being rehabilitated. And unfortunately many of the most psychopathic ones wind up in positions of power.”

CVW: What’s your interpretation on substance use in America?

WG: “Yes, the drug question is very interesting. I have many years clean and sober and I know exactly what it’s like to go behind the looking glass and many of my friends didn’t make it back.

I was one of those guys that really had no choice. I had that light bulb moment where I could see the stark truth of what I was capable of and what I was not and also I kind of used all those substances to get to a certain point and once I reach that threshold they no longer serve me. A DTEASE show for me is the most incredible buzz and when everybody’s amped up and feeling it it’s just like one big ‘mindgasm’. We definitely should treat drugs and drug addicts and alcoholics like a disease. I personally think all of that stuff should be legalized because if people want it they’re going to get it. But once it was legal, the cartels would go out of business overnight because there would be no money in it. Prohibition never works. Humans are in constant search of some kind of new kick. The trick is to do it from inside-out not outside-in, in my humble opinion. And the big daddy of all drug pushers is ‘Big Pharma’. The opioid epidemic is of monstrous proportions. I used to pick up people from a heroin overdose with the rig still close by and needle still in their arm and that has dropped dramatically in the last five years. It’s almost always prescription opioid drugs mixed with alcohol and you can’t tell me that the people in those companies didn’t know of the addictive nature of those things and the people selling it don’t care because they get a fucking kick-back.”

I also briefly spoke with Desert representative Ronnie King about his friends in The DTease. I asked him to give me the lowdown on their association.

RK: “Wilson and THE DTEASE are amazing! I’ve had the privilege of producing many songs with them. It’s a show to see! I met Wilson many years ago through the late famed bassist of Agent Orange and publicist James Levesque. His friends are my friends. We brought the band to Chateau Relaxo my studio here in desert and recorded six songs. We became great friends and brothers. I hooked Wilson up with jimi FITZ and wrote a song together for his first album in many years. We are great friends and we visit each other in Costa Rica, our second home where Wilson also has a home. I’m so excited to hear and see them in the desert. It’s gonna be a show to see when it happens!”