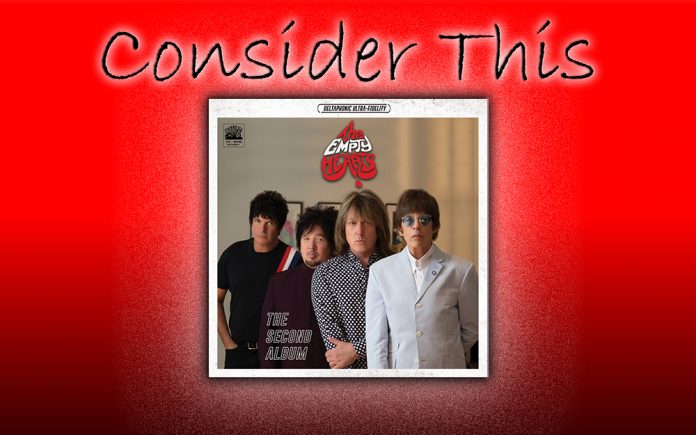 The general consensus is that 2020 has been an unmitigated shit-show. From Kobe to COVID to Chadwick and beyond, and there’s still over 100 days to go. Yikes! Thankfully, the Empty Hearts have finally released their second album, aptly entitled, The Second Album. That’s right, Power Pop’s first “super group” has returned.

After a 30-year run as bassist for the iconic Garage Rock band, the Chesterfield Kings, Andy Babiuk had a simple wish. He was hoping to start a new band that would capture the authentic passion and intensity he first felt when he began playing music as a teenager.

In 2013, He enlisted a few old friends, each had made their bones in groundbreaking bands; Clem Burke, powerhouse drummer for Blondie, Elliot Easton, lead guitarist for The Cars and Wally Palmar, vocalist and rhythm guitarist for the Romantics. From the minute they plugged in their amps and stepped behind the kit, playing together felt effortless. More importantly, their musical chemistry was electric.

Once all the pieces of the puzzle were in place, they quickly scheduled time to get together to write and record some demos. Wowed by the results, they booked a studio and recruited Ed Stasium to handle production chores.

Back in 1970, Ed began his career fronting a band called Brandywine, but realized his talents were best suited behind the boards. Since the late ‘70s he has produced seminal albums for everyone from the Ramones and the Talking Heads, to Marshall Crenshaw, the Smithereens, Living Colour, Motorhead, The Pursuit Of Happiness and the Misfits.

With Ed at manning the controls, the album came together almost seamlessly; most songs were done in one take. The entire album was completed in an astonishing five days, but the four-piece still hadn’t settled on a name. At that point, they enlisted their old pal, Rock & Roll’s favorite consigliere, Little Steven Van Zandt.

Although he is best known as lead guitarist in Bruce Springsteen’s E Street Band, he has also had a rewarding solo career and made time to carve out a successful acting career, most notably as “Silvio Dante,” Tony’s right-hand man on “The Sopranos.” As if that wasn’t enough, he has long championed the revival of ‘60s Rock on his Sirius XM radio channel, “Little Steven’s Underground Garage.” Once he showed them his secret list of unused band names, they chose The Empty Hearts.

Their self-titled debut arrived in 2014. A sharp synthesis of Garage Rock and Power Pop, with hints of Punk and New Wave. It was an instant hit with the critics, as well as discerning fans. The Empty Hearts played packed houses across the U.S. and Japan.

It’s taken six years to release a follow-up. That’s is a long time between albums, but these guys really have nothing to prove, a couple of them have already been inducted into the Rock & Roll Hall Of Fame. But prior commitments took precedence.

Each one of the guys had separate musical obligations. Andy runs his own guitar shop, Fab Gear and has authored several essential books spotlighting the Beatles and Rolling Stones. Clem has continued to tour and record with Blondie, plus he is the subject of a 2018 documentary, “Clem Burke: My View.” Elliot has maintained a thriving solo career recording with his band the Tiki Gods. He was dealt a blow by the sudden death of Cars front man, Ric Ocasek last year. Until then, he always figured another Cars album was on the horizon. Wally remained busy touring as a solo act and with The Romantics. With enthusiastic Empty Hearts fans clamoring for new music, the guys were able to return to the studio. Subsequently, they’re back with a record aptly entitled The Second Album.

The opening cut, “Coat-Tailer,” blasts out of the the speakers sporting strafing guitar riffs, pounding piano, tensile bass lines and a pile-driving beat. Beatific, Beatle-riffic harmonies on the chorus nearly cushion the blows of each verse, that unmask an obsequious poseur; “You come around with good intentions, you’re nothing but a shrewd manipulator, always such a great pretender, nothing but a wannabe/You see the real me, I see the real you, it goes on and on, and on, just another coat-tailer.” The song kicks into overdrive on the instrumental break as Clem locks into a triple-time tattoo and Elliot unleashes a combustible solo that seems to spiral, duck-walk and flutter in mid-air.

Even though their debut offered a master class in concise songcraft, for the new record the Empty Hearts add some new colors to their sonic palette, and the results are positively thrilling. The next three tracks manage to shapeshift through a plethora of styles.

“Remember Days Like These” blends chiming guitars, plush keys, nimble bass lines and a crackling beat. The latter is provided a genuine Mop-Top Ringo Starr, which feels wholly apropos since the song toggles between a “Rubber Soul” Folk flavor and Byrdsy, Rickenbaker grooviness. Rather than pine for the bygone days, the lyrics seem determined to celebrate the now; “These are days to remember, time for you and me/Build our hopes, build our dreams, so remember days, remember days like these.” Jingle-jangle guitar chords intertwine with propulsive Hohner pianet notes as the song winds down to a close.

Conversely, “Well, Look At You” is an infectious Soul-Shake. The song is powered by a walloping backbeat, pulsating horns, rippling guitar licks and roiling bass. Lyrics pay homage to a local femme fatale; “Well, you never take your cues from strangers, and you never look quite the same, I always think a lot of you baby cause you stand out like a dancin’ flame/I knew you had it right from the start, there was just something that just set you apart, Cause I know you’re too good to be true, ooh-ooh, look at you.” On the break, Elliot’s prickly riffs swoop and sting over a powerhouse brass section, before the whole enterprise suddenly stops on a dime.

On a record that feels pretty perfect from start to finish, four tracks stand out from the pack. Although it wasn’t written this year, “The World’s Gone Insane” feels tailor-made for these pandemic-a-go-go times. Whiplash guitar riffs collide with hurtling harmonica, boomerang bass, frenetic keys and runaway locomotive rhythm. Wally’s indignation feels up close and personal as he rails against the global negligence; “Every day it’s on T.V., the chaos is affecting you and me/Confusion reigns we’re all insane, it’s a different world, will never be the same.” On the break, Clem rides the hi-hat and the velocity accelerates at a cyclonic rate, Elliot unleashes a rapid-fire solo over the rest of the band’s blitzkrieg attack. Truly a tour de force!

Slightly more philosophical and sanguine is “Sometimes Shit Happens For A Reason.” Over a defiant jackhammer beat, shang-a-lang guitars, brawny bass lines and buoyant keys, Wally unspools a series of super-specific scenarios; “Well now I got fired by the big boss man, he said ‘Hey boy, you gotta go,’ been workin’ like a dog every Hard Day’s Night, now there’s one thing I gotta know/You had to downsize just to line your pockets, getting rid of me and my friends, then you got caught, you had it comin’ and you got fired in the end, sometimes, shit happens for a reason.” Elliot’s incendiary solo underscores the fact that karma, is indeed, a bitch.

The boys pump out some Maximum R&B on “The Best That I Can,” matching flailing harmonica notes to chunky power chords, sinewy bass and a bludgeoning beat. Wally’s back is to the wall within this romantic confrontation. This rebellious Romeo reluctantly wears his heart on his sleeve, stubbornly asking “So what do you want me to do, I’ve given you love that is true, you’re holding my heart and my soul, and that’s how I feel.” On the break, someone exhorts, “C’mon Clem,” and the drummer executes a pummeling assault. Then, to quote George Jones, “the race is on,” Elliot spits a volley of staccato riffs, Wally chimes in with blistering harmonica notes, Andy adds some Ox-ified bass as frenzied Hammond B3 notes usher in a second guitar eruption before everyone simply wigs out and the song shudders to a close.

Finally, on “The World As We Know It Moves On,” the action slows as the band shifts gears. This languid and breezy ballad is anchored by a shimmery guitars, angular bass and pensive keys. Wally’s vocals are buoyed by stacked and sunny, Beach Boyish harmonies. The lyrics counsel patience, offering this cryptic observation on the bridge; “People seem so ordinary, living like there’s no tomorrow, you can feel it, you can see it, a change is gonna come.” Clearly, they just weren’t made for these (Covid) times.

Other interesting tracks include “If I Could Change Your Mind,” a blustery apologia fueled by smoky harmonica, ringing guitars, wily bass and lush harmonies. Here, Wally’s harmonica and Elliot’s guitar pull off a fiery pas de deux on the break. Then there’s the stompy “Death By Insomnia” which shares some musical DNA with Argent’s “Hold Your Head Up.” With “The Haunting Of The Tin Soldier,” they lock into a muscular sound that echoes mid ‘60s antecedents like the Kinks, Yardbirds and the Small Faces.

The album closes the moody wonderama of “Indigo Dusk Of The Night.” This ambitious shapeshifter opens with ringing acoustic arpeggios, honeyed four-part harmonies, and dreamy keys. Wistful lyrics look ahead to life’s final equinox; “As I look through the trees the colors they change, and the leaves are fallin’ down/There’s a chill in the air, you know Autumn’s here, and time keeps slippin’ by.” As the track gathers speed, the pastoral groove is supplanted by a swaggering electric guitar, before taking a bit of a of a magical mystery trip. The track is suffused in ambient noise, backwards looping, until finally collapsing into a heap. It’s a grandiloquent finish to an protean effort

“This record is an adroit combo-platter of sounds and textures that is equal parts stripped-down and economical, one minute sprawling and complex, the next. It’s clear that this record is as much of a labor of love as the band’s eponymous debut. Nearly 50 years ago, Ricky Nelson surmised, as a musician, “You can’t please everyone, so you’ve got to please yourself.” With The Second Album, The Empty Hearts manage to do both.