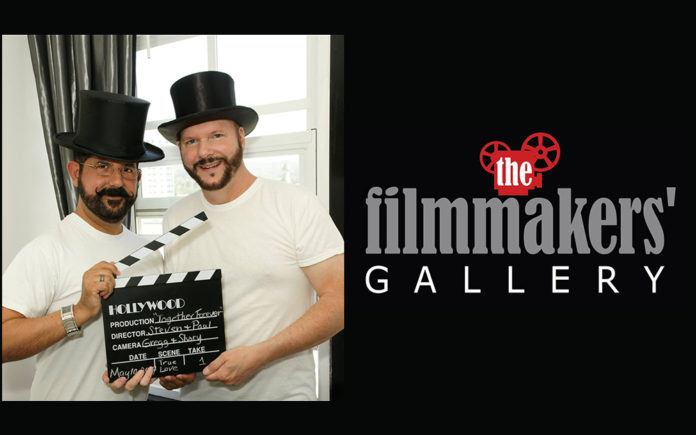 Where can you sip a cocktail and have your picture taken with a Tony Award-winning actor AND an Academy Award-winning producer at the SAME TIME?  ANSWER:  This coming Saturday, June 9th at the Palm Springs Cultural Center’s Camelot Theaters!

Come and meet and mingle with Tony Award-winner Gary Beach, and Academy Award-winner Jonathan Sanger – Along with filmmaker/moderator Vincent Sassone. This is a rare treat, indeed, and on the Eve of the 72nd Annual Tony Awards – which will be broadcast on Sunday, June 10th at 8pm, PST on CBS! 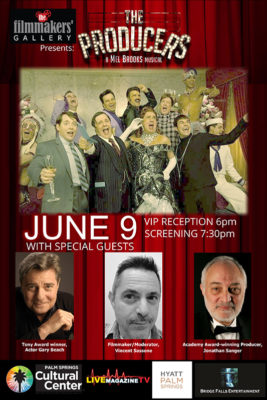 Gary Beach won his Best Featured Actor in a Musical Tony Award in 2001 for the smash-hit musical THE PRODUCERS. He also won the Drama Desk and Outer Critics Circle Awards for playing Roger DeBris. Gary was nominated for a Tony Award for originating the role of Lumiere in Disney’s first-ever Broadway musical, BEAUTY AND THE BEAST, in 1994. His many other Broadway shows include ANNIE, OMETHING’S AFOOT and 1776.

He was nominated earlier in his career for producing the heart-wrenching 1980 drama, THE ELEPHANT MAN. His other producing credits include Mel Brooks’ THE PRODUCERS and FATSO, FRANCES, starring Oscar nominees Jessica Lange and Kim Stanley, VANILLA SKY, starring Tom Cruise, FLIGHT OF THE NAVIGATOR and last year’s Oscar-nominated MARSHALL. Jonathan has produced outstanding work for television, as well.

A Conversation with Gary Beach 7-7:30 pm

Screening of THE PRODUCERS 7:30 pm

THE PRODUCERS: THE MUSICAL

Based on the hit Broadway musical created and written by comedy legend Mel Brooks! After putting together another Broadway flop, down-on-his-luck producer Max Bialystock teams up with timid accountant Leo Bloom in a get-rich-quick scheme to put on the world’s worst show! The Producers holds the record for the most Tony Awards won by a single show: 12!

Nominated for 4 Golden Globe Awards, including Best Picture – Comedy or Musical, and nominated for a Grammy Award for Best Original Song

WHAT: From Stage to Screen – A Conversation with actor Gary Beach. Gary won a well-deserved Tony Award for Best Featured Actor in a Musical, for his performance as Roger DeBris in the 2001 Broadway blockbuster. Gary will discuss his creative process of translating his character from stage to screen.

Be sure to check out this fun scene featuring Gary’s amazing talents in the film singing, “KEEP IT GAY”!