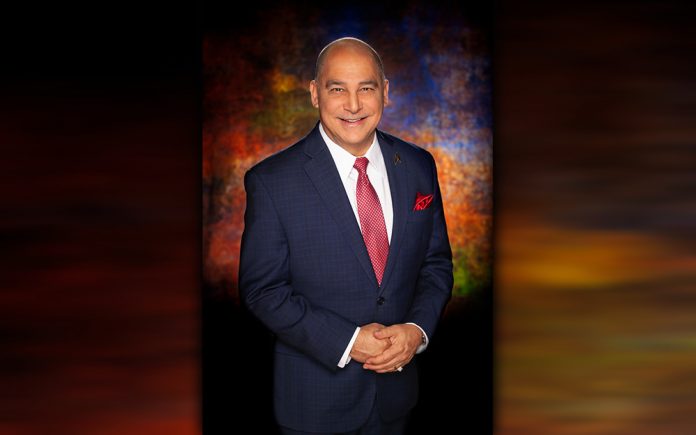 KESQ News Channel 3 is dedicated to bringing up-to-date coverage and First Alert Weather to the Coachella Valley. The news station has garnered a reputation of being the Desert News Leader with these ideals and also the team of individuals behind-the-scenes and onscreen—meteorologist Patrick Evans being one of them.

Evans has been serving the Coachella Valley for over a decade, but in addition to being a well-known face among desert residents, there is more to this local news personality than meets the eye.

Before coming to the Coachella Valley, Evans grew up in Charlottesville, Virginia, and also spent some time in Morristown, New Jersey, during his youth. He graduated from the University of Virginia, where he studied Environmental Science, focusing on Meteorology and Climate Studies while also minoring in Political Science.

“My father [Fulvio “Tony” Iachetta] was an engineer, and I always had an interest in science and how things worked… He was my greatest role model. He was a professor, a scientist, and a towering intellect, but also one of the most giving gentlemen you could ever meet… I became fascinated with weather as a kid, and still enjoy studying it today,” said Evans.

It was in August of 2002 when Evans moved to the Coachella Valley and helped to launch CBS Local 2, which went on the air on Labor Day that same year. For many years, Evans was Chief Meteorologist for CBS Local 2 and also currently hosts “Eye on the Desert.”

“The best part of my job is working with the public, specifically the many charitable organizations I’ve had the pleasure of working with since moving here, and getting to know people here in the Valley,” stated Evans.

Throughout the course of his career, Evans has had the opportunity to travel all over the United States and the world. Some highlights that he notes include covering a couple of National College Football Championship games, going to Peru to cover students working with Dr. Robert Ballard—the deep-sea explorer who found the Titanic, and being honored with a Star on the Palms Springs Walk of Stars. Evans also won an Emmy as part of an ensemble newscast in the early years of CBS Local 2.

As far as further career goals go, Evans is content with what he has accomplished and wishes to continue pursuing his passions.

“I am lucky to have a job I really enjoy in a place I love to live. I’m living my career goals. Aside from my television work, I started an Italian foods company called Fulvio’s Foods and we make gourmet Italian sausages, so I’d really like to see that company grow and expand, preserving my family recipes,” explained Evans.

When he’s not working, Evans is very involved with local charities. He served on the Board of Loma Linda Children’s Hospital Foundation, the Desert Symphony, and Pathfinder Ranch. He spent ten years on the Board of the Family YMCA of the Desert as well. Evans acts as an emcee and host at dozens of charity events each year, including National Philanthropy Day, where he was named “Volunteer of the Year” in 2018.

“I used to play a lot of golf, but my wife, Andrea, has two daughters, and so when I’m not at work, I usually spend my time with the family. We travel quite a bit, which is something both Andrea and I enjoy, and feel it’s important for the kids to experience other places and cultures. I do enjoy music, and there are a couple of piano bars like Melvyn’s where I get to sing a Sinatra tune every once in a while,” said Evans.

Even though he is already involved in the public sphere, Evans considers himself to be an open book, and stresses the importance of having his wife, family, and two rescued dachshunds in his life. Some might be surprised to know that Evans puts his interest in music to good use with his radio show on CV 104.3FM, where he acts as the “Afternoon Drive Guy” Monday through Friday.

“I hold Frank Sinatra in high esteem. Frank loved the Coachella Valley, and called it home for nearly 50 years, so I feel connected to him in that way, and got to know Barbara Sinatra fairly well in the years before her death. Barbara actually helped me propose to my wife Andrea!” revealed Evans.

Evans foresees many more years in the desert with his family, having just bought a home in Cathedral City last year. Although he plans to travel more after he retires in the future, Evans knows the Coachella Valley will always hold a special place in his heart.

“I feel incredibly lucky to do what I do and live where I live. We feel like the Valley has blessed us, and we try to give back as best we can,” said Evans.