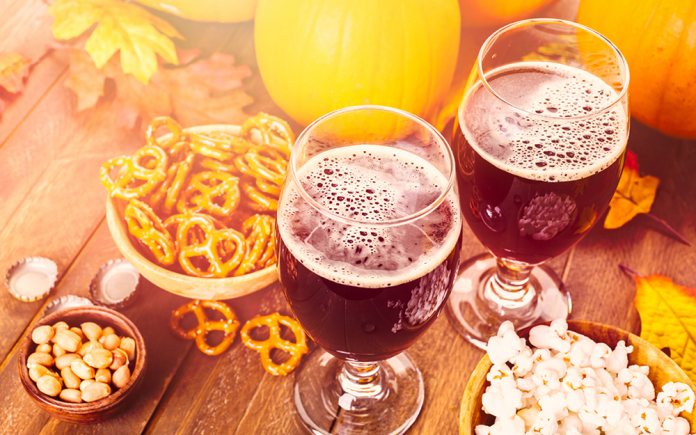 You know I don’t restrict certain beer styles to a definitive time of year. One doesn’t exclusively need to drink porters and stouts in the winter. Summer isn’t just for pilsners. Fall, in particular, welcomes all types of beer. Want to crack open a milkshake IPA in the Palm Springs heat? Go for it! Eyeing that tart saison on a cool Rancho Mirage evening? I’m not stopping you. Whoever told you that you should only be putting back Märzens is wrong (but I would still recommend some good Märzens.)

I love this time of year as it allows me to put down the pumpkin and Oktoberfest brews to revisit some old favorites. Think of it as knocking on the front door and rekindling a relationship with a long-lost friend of sorts. There are still plenty of timeless classics on the shelves which are perfectly suited to our chilly in the morning and cool in the evening style of weather.

Stop 1. New Belgium Fat Tire. Our long-lost cousin in Colorado is still churning out a beer that was so popular that consumers thought that the name of the brewery was “Fat Tire”. This beer was born on a bike. When New Belgium’s co-founder pedaled his way through Europe, sampling beer along the way, the tires on his mountain bike garnered glances and comments that inspired the name of the craft beer icon. The flavor profiles he discovered on that ride sparked the recipe for a beer he would begin to brew in his Colorado basement. It’s as good now as it has ever been and certainly worthy of a new test ride.

Stop 2. Karl Strauss Red Trolley. Back in the 1980’s, San Diego was void of the thriving beer scene it has today. The city had not seen fresh beer since Prohibition and the term ‘craft beer’ did not even exist. That didn’t stop Chris Cramer and Matt Rattner; two college buds determined to change the status quo. With the help of Chris’s cousin, Master Brewer Karl Strauss, that Karl Strauss Brewing Company opened its doors in 1989 to kick off the city’s craft beer industry. Red Trolley became the flagship and is still a benchmark for the style.

Stop 3. Bell’s Amber Ale. Bell’s Brewery is deeply rooted in homebrewing, their community, and sharing their craft with beer lovers old and new. Coming to Kalamazoo, Michigan to attend College, Larry Bell started homebrewing in the early 1980s and opened a homebrew supply shop in Downtown Kalamazoo in 1983. As more and more people were requesting samples of his beer, Larry began brewing commercially in a 15-gallon soup pot and opened Kalamazoo Brewing Co., which sold its first beer on Sept. 19, 1985. Amber Ale quickly became their flagship beer. It’s another benchmark for the style and more than worthy of a visit.

Stop 4. Deschute’s Black Butte Porter. In1988, Gary Fish established a small brewpub in downtown Bend, Oregon and named it after the iconic waterway flowing through town, the Deschutes River (pronounced da shootz). With a belief that good beer brings people together, Gary founded The Deschutes Brewery & Public House as just that – a home for the public. A community gathering place, where friends, family and strangers could come together over some great food and a house-brewed pint of beer. Black Butte contains what I can only refer to as a ‘silky’ combination of chocolate and coffee which will remind you why Porter is not always playing second fiddle to Stout.

Stop 5. Sierra Nevada Celebration. It seems that Celebration makes nearly every list I make, so why deviate from the norm? Once they pick fresh hops, the clock starts ticking. Each year, after visiting the Pacific Northwest to hand-select the best Cascade and Centennial hops, they race the harvest home and brew immediately to capture citrus, pine, and floral notes at their absolute peak; aromas and flavors for the perfect autumn beer. It’s a magical time at the brewery (has been for 40 years) when their brewers huddle around the fermentation tanks, toasting the start of a special season with a fall beer in hand. Cheers to the beginning of the holiday season!

Stop 6. Left Hand Milk Stout. It all started with a humble homebrew kit and the drive to make better beer. Tired of the same bland and dated choices everywhere, Air Force friends Eric Wallace and Dick Doore set out to make the kind of beer that excited them; beer they wanted to drink. A hobby quickly became an obsession and it wasn’t long before Left Hand Brewing was born in Longmont, Colorado. Over 26 years later, they’re still forging our own path with iconic brews like Left Hand Milk Stout…possibly the most-awarded beer in the history of the Great American Beer Festival.

So, there you have it. A perfect mixed six-pack to kick off the beginning of the new season in the Coachella Valley!

(When Ed Heethuis isn’t brewing at Spotlight 29 Casino for 29 Brews, you will find the Certified Cicerone / Brewmaster out on his road bike, strolling in a pumpkin patch, or talking beer with the patrons at Taproom 29. He may be reached at: heethuis.ed@gmail.com or wherever beer may be found in the wild.)