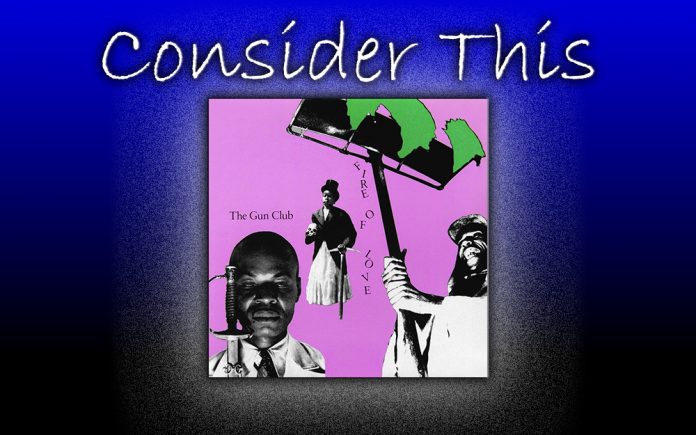 More than 40 years ago, Punk Rock snarled, scratched, spit and elbowed its way into the cultural zeitgeist. Although it was invented in the bowels of New York and its popularity exploded in Great Britain, it truly thrived in Los Angeles. Back in the mid ‘70s, L.A. was still a bastion of sun, sand, surf and mellow vibes. But just beneath the smoggy, sunshiny crust, was a sprawling metropolis, a melting pot of dissatisfied, disenfranchised denizens not living the California dream. Bands like The Germs, The Weirdos, The Plugz, Fear and X tapped into that dichotomy.

These Punk progenitors made their bones in scuzzy venues like the Anti-Club, Madame Wong’s, Club 88 and the Masque. Initial inspiration was derived by Punk’s primitive D.I.Y. ethos, but as their musical influences expanded, they began to discard Punk’s nihilistic attitude, and carved out their own sonic landscape.

It was an inclusive scene; Punk paved the way for myriad permutations. There was the skinny tie Power Pop of The Knack, 20/20 and the Plimsouls. Meanwhile, bands like X, The Blasters and Los Lobos began incorporating Country, Blues and Folk into their sound. Taking their cues from ‘60s Psychedelia and Garage, The Bangles, The Dream Syndicate, Rain Parade and The Three O’ Clock formed a loose collective known as The Paisley Underground. Then there was the Jazz/Blues/Psychobilly of The Flesh Eaters and the thrashy R&B of Top Jimmy & The Rhythm Pigs. Diving head first into this sweaty musical mosh pit was The Gun Club.

The nucleus of The Gun Club, Jeffrey Lee Pierce and Brian Tristan, met waiting in line for a Pere Ubu show in 1979. Jeffrey Lee had already begun making a name for himself writing for Slash fanzine (under the nom de plume of Ranking Jeffrey Lee). He was Reggae music aficionado and also ran Blondie’s L.A. fan club, managing to become friends with the NYC Punk/Pop band. Before connecting with Brian, he had cycled through a few groups like Red Lights, and E-Types, as well as Phast Phreddie & Thee Precisions. Both guys displayed an eclectic taste in music that belied their age. Jeffrey Lee encouraged Brian to learn guitar and join the new band he was starting.

As Creeping Ritual, their original line-up included Jeffrey Lee on vocals and guitar, Brian (now known as Kid Congo Powers) on guitar, bassist (and L.A. Times music critic) Don Snowden and drummer Brad Dunning. At the suggestion of Jeffrey Lee’s roommate, Circle Jerks vocalist Keith Morris, they changed their name to The Gun Club. But Don and Brad left before the year was out, replaced by ex-Bags bandmates Rob Ritter and Terry Graham. A few months later Kid Congo accepted an invitation to join The Cramps and Ward Dotson took over guitar duties.

The Gun Club distilled their disparate influences into a heady brew that blended Blues, Country, Punk, Rockabilly and Folk. Some categorized it as Tribal Psychobilly Blues, others classified their sound as Cow Punk. They became a fixture on the L.A. scene and audiences either loved them or hated them. They gained wider exposure opening for more established acts like X, The Blasters, Bags and Circle Jerks.

Tito Larriva of The Plugz, and Flesh Eaters front-man Chris Desjardins (a.k.a. Chris D.) each offered to produce the band, The Gun Club booked sessions with both. Once they signed with Ruby Records (an off-shoot of L.A.’s seminal Punk label, Slash Records), all the recorded material was combined into their sublime 1981 debut, Fire Of Love. The album garnered good reviews and decent sales.

Their sophomore effort, Miami, was produced by Blondie guitarist Chris Stein and released through his boutique label, Animal Records. The general consensus was the songs were great, the production, not so much. An unpredictable frontman, Jeffrey Lee was often at odds with his bandmates. Drug and alcohol consumption fueled their disagreements. Tired of the constant in-fighting, he sacked Terry and Ward at the end of 1982. Rob had already left in order to concentrate on his new band, 45 Grave. A third album, The Las Vegas Story arrived in 1984. It featured a hodgepodge of musicians, including Blasters guitarist, Dave Alvin. Surprisingly, it was their most cohesive album to date. From then on, the band endured myriad line-up changes, with Jeffrey Lee remaining the only constant. The Gun Club officially broke up in 1985 and he moved to London, intent on a solo career. His debut, Wildweed was released that same year, but by 1986 The Gun Club was back. Original members rotated in and out, for a time, Kid Congo played simultaneously in The Gun Club, as well as Nick Cave’s Bad Seeds. 1987’s Mother Juno was produced by Cocteau Twins visionary Robin Guthrie. Between 1990 and 1993, The Gun Club recorded three more albums, Pastoral Hide And Seek, Divinity and Lucky Jim. Jeffrey Lee bounced between L.A., London and Japan, but health issues dogged him. In late 1995 the band’s most recent line-up played a show at The Palace in Hollywood. Six months later, Jeffrey Lee was found unconscious on the floor of his father’s house in Salt Lake City, Utah. He was hospitalized and remained in a coma until his death from a brain hemorrhage. He was just 37 years old.

In the 40 years since Fire Of Love was released, The Gun Club has attained cult status. Their influence has been felt by artists like Concrete Blonde, 16 Horsepower, Mark Lanegan and the Yeah, Yeah Yeahs. The White Stripes used to include Gun Club songs in their early sets. Now the cool kids at Blixa Sounds have released a deluxe edition of their seminal debut.

The album opens with the sybaritic kick of “Sex Beat” Jittery guitars stutter and strafe, colliding with manic bass lines and a pile-driving beat. Jeffrey Lee’s yelpy vocals navigate the melody’s hairpin curves, charting a course as carnal conquistador; “And every day I agree, you throw me down by the Christmas tree, I watched your lights blink on and off while you start your fun with me/I, I know your reasons, and I, I know your goals, we can fuck forever, but you can never get my soul.”

Back in the day, part of The Gun Club’s allure was that their music was equal parts crude and cagey, shambolic and shamanistic and always wildly unpredictable. Listening with 21st century ears, the music isn’t so much polished as it is assured and self-possessed. Take “She’s Like Heroin To Me,” snarling shards of guitars fracture atop prowling bass, wheezy slide guitar notes and a punishing big beat. The swirling and chaotic arrangement casts a hypnotic spell, as lyrics limn the edge of erotic fixation, hint at incest, obsession and addiction, but still sneak in a sly reference to “Ruby” by Kenny Rogers & The First Edition; “She’s like heroin to me, she cannot miss a vein, don’t let her take her love to town, they will never fill her heart, she needs passion like her father’s used to be, I know because I’m the train shooting down the mainline, I know because I’m the Indian wind along the telegraph line.”

Then there’s “Black Train,” which clickity-clacks down the track, powered by brawny guitars, rattle-trap bass and a locomotive rhythm. Lyrics sketch out the familiar saga of an outlaw on the run; “Every drop of my body moves with the train and some of it’s on the floor, I’m slippin’ out to anyplace, although I know I’ve been there before.” Jeffrey Lee’s vocals are simply bewitching, going from a whisper to a keen, speaking one minute, yodeling like a Prairie Dog the next.

“Ghost On The Highway” lands somewhere between a murder ballad and a hellbilly hayride. Whiplash guitars careen out of the speakers as bendy slide guitar notes echo and sway, bookended by wily bass lines and whipcrack rhythm. Choleric lyrics take aim at a spectral femme fatale who has cast him in a spell; “If I ever lie with you again, I pray I do not sleep, if I ever closed my eyes again, I’d realize what you are to me, you are simply a liar, an animal who bluffs and steals, until you become a bigger creature’s meal/You’re a ghost on the highway, you’re trash and meaningless, I hate you but I love you, I’ll carry that to the end.”

A couple of songs, “Jack On Fire” and “For The Love Of Ivy” should have been hits. The former unspools a sinewy guitar figure that is ridiculously catchy, matched by enough distorto bottleneck to dirty up the pretty. Jeffrey Lee comes across as a cheerful, charming psychopath, adopting a come hither pose; “I am like Jack and I tell you this, I will be your lover and exorcist, in the stillness of the mosquito sunset, you will make love to me your very best.” Yes, this seduction comes with a side order of DDT! On the vreak, Metallic guitars add a hint of Glam-tastic crunch.

The latter is a bit of a mash note directed at Cramps guitarist, Poison Ivy Rorschach. Strummy rhythm guitars connect a walking bass line, Banshee electric riff-age and a blasé beat. Like a cat presenting their owner with their latest kill, the lyrics conflate homicidal tendencies and love; “Gonna buy me a graveyard of my own, kill everyone who done me wrong, gonna buy me a gun just as long as my arm, kill everyone who has ever done me harm/Then go tell Ivy, oh-oh, for the love of Ivy yeah-yeah, I did it for Ivy oh oh.”

The Gun Club put their stank on a couple of Blues classics. Robert Johnson’s seminal “Preaching The Blues” is recast as a screechy, squally Delta Watusi. Jeffrey Lee is fully en fuego, delivering a sermon against the temptations of liquor and ladies; “I had religion, Lord on this very day, but the womens and the whiskey would not let me pray.”

Tommy Johnson’s “Cool Drink Of Water” contains the perfect opening couplet; “I asked her for water and she gave me gasoline.” In The Gun Club’s hands splayed guitars, bowed bass and a cluttered beat teeter on the precipice of pandemonium, nearly collapsing in on itself.

Other interesting songs include the akimbo slip-stitch of “Promise Me” and the molten pleasures of “Fire Spirit.” The original album closed with the sinister throb of “Goodbye Johnny.”

On this deluxe version, the remainder of disc one is given over to alternate takes and 4 track demos, featuring several Fire Of Love songs as well as primitive versions of “Bad Indian,” “Fire Of Love,” “Devil In The Woods” and “Watermelon Man.” Those last five appeared fully formed on the Miami album.

The real treasure trove is found on disc two. It offers up a scorching live set recorded at Club 88 in the Spring of 1981. The band is in their ramshackle glory before an appreciative hometown crowd. Jeffrey Lee acts as ringmaster and carnival barker, riffing, cracking wise and breaking into X songs at the drop of a hat. Along with a plethora of Fire… songs, they offer up blistering takes on (as yet unrecorded) “Devil In The Woods” “Fire Of Love” and “Bad Indian.” They completely dismantle and reassemble the beloved Folk-ballad, “Railroad Bill” and offer an embryonic incarnation of “Keys To The Kingdom.”

Revisiting Fire Of Love 40 years on, it’s interesting how perceptions shift. What seemed sloppy and shambolic in 1981 now sounds pithy and succinct. The Gun Club synthesized Punk and Blues creating a musical template that was clearly, ahead of its time.