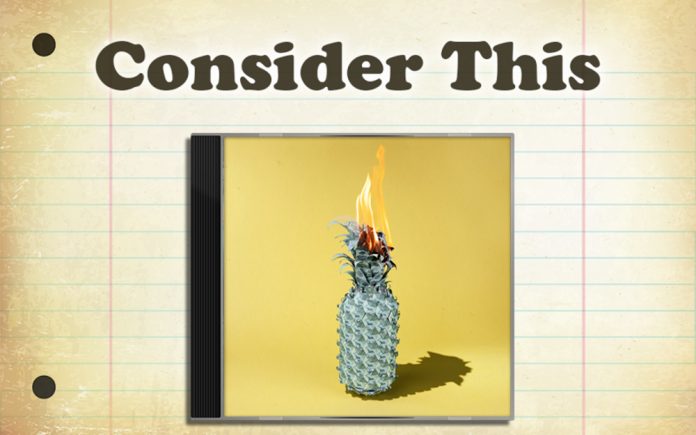 The Happy Fits have been a going concern for about a decade. Cellist Calvin Langman and guitarist Ross Montieth first connected in high school, working their way through their favorite cover songs. After some serious woodshedding, Calvin shared some original songs he had written. The pair recruiting drummer Luke Davis and the New Jersey natives got down to business, releasing their Awfully Apeelin’ EP in 2016.

One song, “While You Fade Away” managed to gain traction on Spotify’s Fresh Finds playlist and the three-piece opted out of college to focus on the band full-time. Their dedication paid off. By the time they released their official long-player, Concentrate, arrived, they had cultivated a loyal and passionate fanbase. Their popularity only increased when they hit the road.

After two years on tour, The Happy Fits returned to the studio, intent on capturing the intensity of their live shows. Their second full-length effort, What Could Be Better, arrived in 2020. Of course, before the band could road-test the new material, the pandemic put the kibosh on their plans. Undeterred, the trio concentrated on staging livestreams on their YouTube and Twitch accounts. Their fans completely embraced their freewheeling antics, which verged on variety show kitsch.

There’s barely a second to breathe before “Dance Alone” careens out of the speakers, a frothy concoction of angular guitars, shivery cello, slingshot bass lines and a hopscotch beat. The buoyant melody and squiggly instrumentation is matched by lyrics that could have been lifted from a long-lost John Hughes teen opus. Diffident boy yearns for popular girl with an enigmatic secret; “Hands are shaking, I’m okay got this feeling I’m just miles away, heart is racing, you’re to blame, I can’t seem to find the words to say I will never understand how no one was there to hold your hand.” Sticky, static-y guitars and a jittery beat ping-pong through the mix mirroring the do-or-die adolescent desperation.

A couple of tracks, “Changes” and “Cold Turkey” crib their titles from two seminal ‘70s songs. On the former, spidery synths, tensile bass, gauzy guitars and a hiccoughing beat thread the needle through a crazy-quilt melody. The listener isn’t required to “turn and face the strange.” But lyrics like “I can’t control the world or change it,” reflect the yin yang emotions, anxiety and ennui, that gripped the globe during the lockdown.

The latter, a stompy minuet, is powered by sylvan strings, slippery guitars, wily bass and a martial meter. Fraternal harmonies verge on falsetto on the pre-chorus. The lyrics limn the prickly sensations of chemical detox, but by the chorus, it becomes clear that (much like Robert Palmer), the narrator’s going to have to face that he’s addicted to love; “It’s going to take some time and space, honey so when you go leave me alone, it’s gonna getcha high and low from me, so when you go leave me alone.” A Surprisingly jaunty whistle usher the song to a close.

With each new record, The Happy Fits manage to expand their musical horizons and remain true to their original sonic blueprint. Take the stately “Another Day,” which connects shadowy cello notes to air raid siren synths, brittle bass lines, soaring guitars and a hulking backbeat. Introspective lyrics suggest we push past everyday challenges; “It’s just the madness of reality is that nothing really matters, so through the chaos sing your melody, you’ll find everything you wanted.” Ross, Calvin and Luke’s willowy harmonies coalesce around song’s final denouement; “My thoughts recede to all my habits, a kind of freedom that’s automatic, if I’m my keeper, will it matter? Will it matter? Does it matter?”

If The Buzzcocks, The Cars and A Flock Of Seagulls ever thought to collaborate, it might’ve sounded like “I’ll Be Somewhere.” Skronky guitars ride roughshod over whirring synths, sinewy bass, and a walloping backbeat. Sunny harmonies can’t camouflage tart lyrics that hint at emotional treachery and betrayal; “Tell me your secrets, maybe I’ll tell you mine, cause I’ve got a feelin’ something just ain’t right, I’ve been believing one day it’ll all be fine, so give me a reason to stay here one more night.” As suspicions mount, the song’s velocity increases, and the final verse reveals fidelity is a two-way street; I got a million dreams but I’m blind to my own affection, oh, when I fall apart, everything you can make anew/ I got a lover’s heart, but I walk in vagabond directions no, I don’t wanna start any place that’s away from you.”

Meanwhile, “In The Lobby” carefully takes aim at media whores and the culture of the celebutant. Lowing cello, loose-limbed bass, darting synths and crisp guitars fold into a relax-fit Cha-Cha-Cha. Caustic lyrics like “There you go again, talking shit, Helter Skelter politic, hide under that shade of green, ‘I can be a Kardashian, I don’t hate the hordes below, I’d just rather drink Merlot, marinate in my sex appeal, I’ll forget what’s wrong and real,’” ridicule the twin vices of avarice and instant gratification.

Finally, on the infectious “Place In The World” jangly guitars, spiky synths, brisk cello notes and flinty bass lines are tethered to a percolating beat. Enigmatic lyrics decry economic disparity and the casual culture of cruelty that has pervaded these last few years; “Something about it don’t sit right, as we feast, brothers devoured by bombs that we drop at night.” But, to paraphrase The Stones, what can a poor boy do, ‘cept sing in a Rock & Roll band?

Other interesting tracks include the hooky “Little One,” and the honeyed effervescence of “Sweet Things.” The record winds down with the pugnacious strut of “Do Your Worst.” Strummy guitars partner with staccato cello, stroppy bass and a caffeinated beat. Lyrics throw down a verbal gauntlet; “Do your worst, fetch the hearse and I will curse your name again.” Spectral guitar and synth lattice on the break, amping up the menace. Equal parts catchy and fractious, it’s a whizz-bang end to a dazzling record.

Usually, there is a lot riding on an artist’s third album. Songwriters have their whole life to write their debut, effectively shooting their (creative) wad. A second effort simultaneously refines that sound and works out the kinks. Icons like Elvis Costello, Blondie and Tom Petty all hit their stride, critically and commercially, on record number three; Armed Forces, Parallel Lines and Damn The Torpedoes respectively. The same can be said for The Happy Fits’ Under The Shade Of Green. They deftly match erudite lyrics to infectious, hook-filled melodies, without sacrificing their primitive attack. The trio’s first two albums were great, but the third one’s charm.