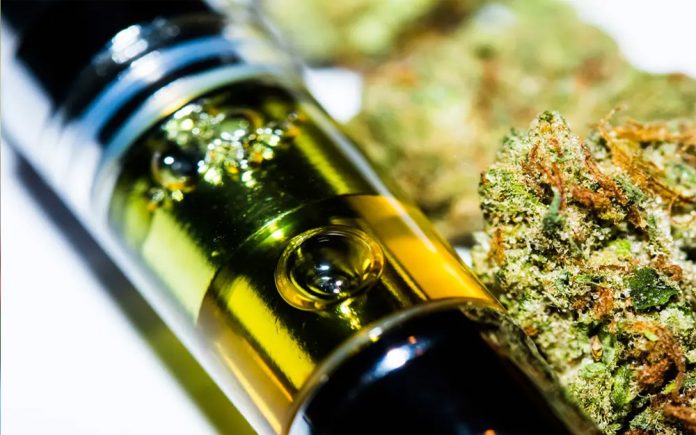 I can tell the holidays are here in my neighborhood because houses began decorating for Christmas the day after Thanksgiving. At my thanksgiving dinner, someone asked what the difference is between smoking a cigarette and vaping. It was a difficult question to answer because most of the guests were over seventy. This age group, who lived through WWII started smoking cigarettes to calm their anxiety. They may have used marijuana, but it was considered “dope,” a substance that fried your brain. That was the thinking in the ’50s and ’60s.

I attempted to explain the benefits of marijuana, but the conversation could not get away from the belief that marijuana is “dope.” It when downhill quickly. So, what is the difference between smoking a cigarette and vaping? That is a valid question.

People vape with battery-operated devices used to inhale an aerosol, which can contain nicotine, marijuana, flavorings, and other chemicals. Puffing activates the battery-powered heating device, which vaporizes the liquid in the cartridge or reservoir. The benefits or harm depends on what substance is in the cartridge.

The electronic nicotine delivery system (ENDS), or e-cigarette, entered the US market in the mid-2000s and rapidly gained popularity among tobacco smokers and never-smokers. Currently, an estimated 10 million US adults and over 3 million high school age adolescents are active ENDS users. Vaping tobacco is not the same as vaping cannabis. Legal cannabis cartridges are regulated and tested for mold, metals, purity, and pesticides.

According to the CDC, a confirmed case of Vaping-Related Lung Injury (VRLI) is defined as an individual that: (i) has vaped within the past 90 days, (ii) has pulmonary infiltrates which appear as ground-glass opacities on a CT scan, and (iii) has no infection, heart condition, or another disease that could explain respiratory distress.

Martin E. Lee states in an article posted on projectcbd.org, that inhaling additive-free, artisanal whole plant cannabis oil with a well-made vaping device is just as safe, if not more so, than smoking organically grown cannabis. Tobacco smoke and cannabis smoke both contain noxious polyaromatic hydrocarbons and carbon monoxide, but the negative effects of cannabis smoke are significantly mitigated by the cytoprotective and antitumoral properties of THC, CBD, and other cannabis components. Currently, there is no causal link between smoking cannabis and cancer. Try explaining that to the over-80 crowd. It’s complicated.

I am sure over the holidays’ parents are offering small servings of alcohol. Does the parent then teach the harms and benefits of alcohol? I doubt that is the case. This dichotomy between alcohol and cannabis needs to be discussed. Teenage children today are more educated about intoxicants than prior age groups. With over 48 million people in the U.S. using cannabis, it is difficult to convince youngsters that cannabis is harmful. The U.S. cannabis market size is estimated at 10.8 billion dollars in 2021 and is expected to reach 13.2 billion dollars in 2022.

VRLI are more related to the contaminants in the cartridge than to the cannabis or tobacco itself. The CDC has not been able to conclusively link a single product or substance to vaping disease incidents.

One of the advantages of vaping over smoking is the odorless discretion it affords the consumer in a society that continues to stigmatize cannabis. My suggestion to parents is to research with their children the dangers of both alcohol and plant cannabis vs synthetic cannabis.

This contradiction between alcohol good, and cannabis bad leads youngsters to dismiss warnings. Over the holidays when families are gathering for dinner and a toast teach them to research their beliefs and argue the pros and cons based on science instead of myths that extoll the dangers of “dope”. Show them the dangers of synthetic cannabis vs regulated cannabis. Teenagers will have more respect for your advice if it is grounded in science rather than fear and prohibition.

Learn more about how to use Marijuana Without the High on the 2nd and 4th Thursday of every month from 11 AM to 1 PM at the Vault Dispensary Lounge. Call 760-866-9660 or send comments to cannaangel16@gmail.com  We are dark on December 22nd.