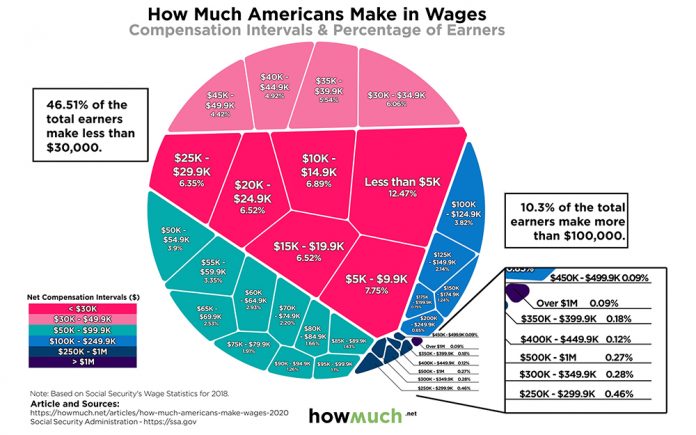 In my December 10th article “A Grim Holiday Season” pointed out how more than one in five Coachella Valley residents is unemployed.  During the month of November, more working-aged adults were not working – a first for the United States.  Current estimates are that one in three small businesses have shuttered permanently with more expected.  As would be expected, millions of American families face eviction from their homes should temporary government orders banning eviction end.  With a rise in COVID cases and shuttering of businesses yet again, we can expect these abysmal unemployment and business failure numbers to worsen as December and January results are reported.

Social Security wage statistics for 2018, the most recent year tabulated, show that half of all wage earners make less than $35,000 per year.  Following the economic damage of the pandemic, we can expect that income levels for 2020 will be no better than 2018 results.

A breakdown of income levels from the Social Security Administration shows that the median wage is around $50,000/year with the earnings of 1,000 people broken down as follows:

Given that so few people have strong income streams, the financial health of most of American households is such that they are no more than a few paychecks from financial calamity.  Prior to the pandemic, more than half of all Americans had a negative net worth.  Net worth is calculated by subtracting one’s debts from their assets.  By all measurements, a large percentage of Americans entered the pandemic without the ability to financially survive the virus.

According to the US Bureau of Labor Statistics, no industry has been hit harder by the pandemic than leisure and hospitality.  At the end of April, nearly one-half of jobs in those industries as compared with only a few months earlier.  At the end of November and before the current virus surge, 20% of the jobs in these industries were still missing.

70% of the U.S. Gross Domestic Product or GDP is dependent on the consumer.  Given the duration of the pandemic and massive impact that it has had on businesses that require people gathering or traveling, the only reason that unemployment and business closures has not been higher is due to the U.S. being in a strong economic condition going into the pandemic and the extraordinary efforts of the Federal Reserve and U.S. Treasury.

While economic problems are awful for tens of millions of Americans, things would have been much worse if not for unlimited liquidity provided to financial markets by the Federal Reserve which saved countless businesses and millions of jobs.  Normally, interest rates would have gone up significantly due to an economic crisis like this.  Businesses like the cruise lines and airlines would have failed.  While governments helped airlines around the world, cruise lines had to go to the public debt markets to raise the money necessary to survive more than a year docked.  Similarly, low rates spurred a historic stock market rally as well as a housing boom as families fled congested and costly cities.

The economic fallout of the pandemic is certain to be felt for years to come with the rich getting richer.  Those hurt most by the pandemic are certain to have the hardest time snapping back.  Those of us fortunate enough to be minimally impacted need to remember this and support small businesses and those in need more than ever.