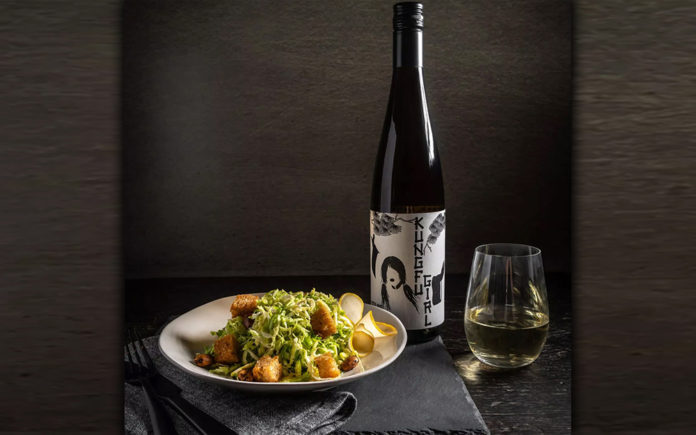 That was the only message—or clue, that we received on the next fanciful yet intriguing underground dinner to be held somewhere along Highway 111.  Actually what was said in a muffled tone over the phone was: “Kung Fu Girl!”  Usually another “message” is provided within ten minutes or so.  But we waited over an hour.

The next phone message in the same muffled raspy voice was: “Velvet Devil!”  At first I thought he said “Velvet Turtle,” and we tried to remember if there was that restaurant operating somewhere here in the Coachella Valley. But none could come to mind and I think that restaurant chain was a thing of the past.

Although “Kung Fu Girl” brought immediate images of a poorly produced Japanese martial arts video, knowing we’re given clues as to who, what, and where of a prospective secret pop-up culinary venue, our minds went expecting Asian Cuisine.

Now we know about the very posh Wally’s Desert Turtle in Rancho Mirage—but this particular underground society never convenes in places like that! But then again we figured—yeah! That’s keeping it fresh!  Fortunately I listened again to the muffled message and heard it correctly this time. “Oh—of course! We’re talking about a Washington State wine pairing dinner to be held off of Washington Street!”

In this column just last summer, I covered and recommended the 2016 Kung Fu Girl Riesling wine, writing: The Riesling [REE-sling or REE-zling] grape is one of the most aromatic grapes we know. Its heavy fumes can knock you around on a very hot day, so it takes talent to tame that baby down. So “rock-star/rebel” winemaker, Charles Smith, took it upon himself to show the world that his Washington State Riesling is the real deal exhibiting a thirst-quenching quaff that’s off-dry, lightly spritzy, with solid stone-fruit flavors.”

Charles Smith’s wine website goes on to explain some more: “It takes an unconventional winemaker to make a totally unexpected dry Riesling. One night, Charles was eating Chinese takeout and watching a fight scene in a notorious martial arts film when he had an idea: a killer white wine made to pair with Asian food. Just like that, Kung Fu Girl was born. And it’s been kicking ass and taking names ever since.”

I recommend this wine, pretty much all the time, at my Ralphs wine when someone asks me to select a wine that can go with spicy foods.  I’m a fan of hot and spicy chicken wings and if there is the Kung Fu Girl around, I’m happier.  A customer of mine was doing a Filipino meal for her friend and came back smiling that the white peach, mandarin orange and apricot flavors in the 2017 Kung Fu Girl Riesling worked perfectly with that cuisine.

So it turns out that Charles Smith Wines teamed up with James Beard-nominated Chef Amanda Cohen of Dirt Candy to create two mouthwatering (but animal-friendly) food pairings, putting an edgy spin on vegetable-focused and plant-based dishes, a technique that put her on Nation’s Restaurant News’ The Power List 2018.

So we were served Chef Amanda’s Shaved Brussels Sprouts Salad with Toasted Almonds and Pears with the 2017 Kung Fu Girl Riesling.  The chef’s pairing comments included, “I believe every salad should be amped up with an explosion of different flavors and textures.  This big bright salad dish gets a spicy kick from the chili pepper-coated almonds, a hint of sweetness from the pear and bitterness from Brussels sprouts.  All bound together with a tangy dressing, the Riesling cuts through these Asian flavors like a dry knife, while pushing the bitterness and sweetness to the forefront of the palate.   With this combo, you really taste those kick ass vegetables front and center.”

We next enjoyed Chef Amanda’s Butternut Squash Risotto dish, but, this course was paired with Charles Smith’s 2016 The Velvet Devil Merlot.  We wine enthusiasts know about the hit Merlot took in one of the best wine-themed movies out there. (Check out the CV Weekly archives on my “Tasting Sideways—A Decade Later”, September 3, 2013.)

And again, whenever a customer asks me about a Merlot, I point out The Velvet Devil and offer the fact that not only is this a fun and bright Merlot, it offers delicious black fruit, cedar, tobacco, and cassis flavors to sip or pair with burgers, grilled steak or anything bacon.  However, on the vegetarian side of things, this Merlot can be celebrated as well.

Chef Amanda’s comments on her Butternut Squash Risotto dish included, “This risotto’s burst of natural sweetness from the butternut squash is contrasted beautifully by the spicy pumpkin seeds.  As these two flavors bounce on the palate, the juicy and pure Velvet Devil Merlot rolls them together to form one smooth, vibrant flavor bomb.

The dishes were indeed delicious, bringing vegetable wine pairing ideas wonderfully.  Should you be interested in looking into her veggie cuisine and what her business has to offer, go on-line to www.dirtcandynyc.com.

The New Yorker Magazine has written, “Cohen is not a vegetarian (she eats seafood), but she is vegetable-mad. She has a problem with most vegetarian restaurants, which she says have a politicized, uncreative approach. She likes cream and butter and deep-frying, and is big on drizzling and tall garnishes. Many of her dishes are so earnest in their embrace of a single ingredient that you find yourself stopping to really think about that vegetable, as if for the first time.”

Back in town—let’s get in gear for the up-coming Palm Desert Food & Wine Fest, scheduled for March 22nd to the 24th.    Cheers!