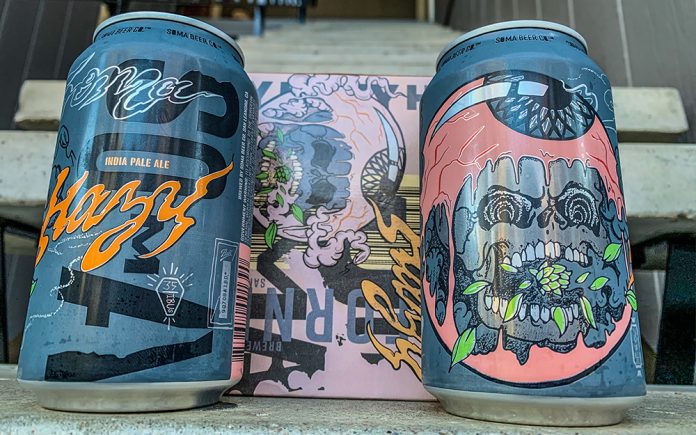 I remember being 12 years old and at a used record store, buying CDs based on how badass the cover art was. I’d discovered Iron Maiden, Megadeth, and Slayer all based on the promises of violent fantasy, horror, and action that the illustrated album art invoked. Hard rock and heavy metal music in particular have always had ties to darker themes of death and the occult. Elvis Presley grinding his hips as he performed represented a rebellion against the social norm of his time, as music got more abrasive so too did the level and manner of rebellion associated with the image.

Craft beer has always viewed itself as a rebellion against the accepted standard of mass-marketed American lager, so there should be little wonder that a number of breweries have chosen to market their products with the same horrific and morbid imagery that heavy metal uses. Indiana’s 3 Floyd’s Brewing has long factioned itself with the heavy metal community, even collaborating itself with underground grindcore band (and a personal favorite of mine) Pig Destroyer on their Permanent Funeral IPA. California’s Stone Brewing has long used a gargoyle as their mascot, adding an element of heavy metal fantasy to their product since 1996.

Soma Brewing Co. is a bay area-based brewery that invoked the spirit of skull and bones fantasy with the can art for their Hazy IPA. With a tattoo parlor approach to illustration, the box of beer caught my eye as it sat amidst a sea of traditionally benign packaging. I mean, a hop flower within a skull, within a bloody, shredded eyeball, covered in smoke tendrils is pretty hard to miss when it’s sitting next to Anchor Brewing’s cheerful (and non-threatening) yellow and red anchor art. Knowing nothing about Soma Brewing, I picked up a six pack of their Hazy IPA to review, based on the artwork alone. The label made me do it.

Appearance: Pours a barely-golden, straw colored yellow, fuzzy more than hazy; the unfiltered murk of a hefeweizen more than the swirling juice of some other NE IPAs on the market. Capped by a head of white foam that dissipated quickly, leaving within a couple of minutes like it was never there. 3/5

Nose: Mango, pineapple, nectarine and stone fruit; tropical hop aromas dominate. Some orange zest, but no other citrus notes detected, and none of that danky, resiny stuff found in a west coast IPA. In other words, on the money. 4.5/5

Flavor: oily, fruity, myrcene forward, with cereal grain in the back. This is not at all a hop juice bomb, with a nice balance between floral, tropical flavors, a light spicy bitterness, and bready, cracker-like wheat flavors. 3.75/5

Mouthfeel: Thin enough to emphasize the carbonic sting of a beer more attenuated than most NE IPAs. No malty sweet sugars or caramelized grains to thicken the mouthfeel, leaving this beer feeling bright and lively. 3.5/5

Overall: While not reinventing the style or even adding anything new, Soma’s Hazy IPA brings a restrained and balanced beer to a category that more often than not tends to parody itself by looking and tasting like an Orange Julius inspired beverage. This beer succeeds in being tasty and refreshing without causing mouth fatigue, giving it a solid 3.7/5

By the time I got to the 9th grade, I had a pretty good idea that I could pick up a CD with a cool cover, and be satisfied that I’d be having a musical journey worth experiencing. Up until I bought Molly Hatchet’s self-titled album that is. The Frank Frazetta illustrated album cover of a dearth dealing, axe wielding horseman completely belied the wimpy, uninspired, chicken-fried country rock that the album contained. Fortunately, Soma Brewing’s Hazy is not that case, with the beer being an enjoyable IPA that was well made and easy to return to.