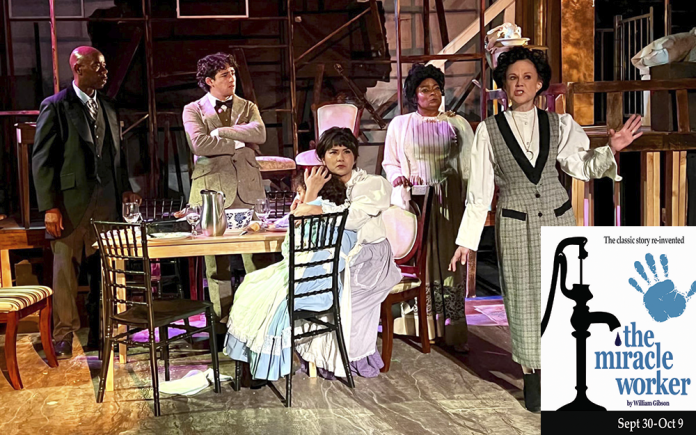 It is a story that most have seen or at the very least, heard of.  As a baby, an illness left Helen Keller blind, deaf and mute.  She was pitied and badly spoiled by her parents, who assumed she was incapable of learning.  Helen was given no discipline and by the age of six, grew into a wild, angry, tantrum-throwing child.  Desperate and as a last resort, the Kellers hire teacher, Annie Sullivan, to serve as governess for their daughter. After weeks of struggles and fights, there is a breakthrough with Annie’s tireless efforts to teach Helen discipline and the meaning of language and communication.

Based on Helen Keller’s 1903 autobiography, The Story of My Life, Playwright William Gibson wrote “The Miracle Worker,” which opened on Broadway in 1959 and went on to win multiple Tony Awards, as well as penning an Oscar winning screen adaptation.

While some ‘classic’ shows can become dated and no longer seem relevant, the story of Helen Keller and her teacher Annie Sullivan is timeless and each production a reminder of miracles.

The play’s title was inspired by a Mark Twain quote: “Helen is a miracle, and Miss Sullivan is the miracle‐worker”

Opening September 30th and running through October 9th, Desert Theatreworks presents the most recent incarnation of this timeless classic.

Time Magazine called the original production “a story that, however well known, acquires stunning new reality and effectiveness on the stage. The overwhelming force of the play’s crucial scenes could not have derived from the stirring facts alone, nor from playwright Gibson’s vivid use of them. What proves decisive is the extraordinary performances, the magnificent teamwork of Anne Bancroft and ten-year-old Patty Duke.”

Rivaling the original performances are the incredibly talented and truly gifted performances of Yo Younger as Annie Sullivan and Tess Phillips as Helen Keller.  While the entire cast, Eddie Stephens (Arthur Keller,) Stephanie Jauregui (Kate Keller,) Miguel Ibarra (James Keller,) Kimberly Cole (Aunt Ev,) Ashley Davies (Martha,) and Nicolai Silva (Percy,) were strong and engaging, Younger and Phillips made this a two person show. Their chemistry was palpable and captivating.  Without even a line of dialogue, Philips took command of every scene she was in. What an incredible stage future this young actress has.  Younger, whose professional reputation proceeds her every performance, embodied the role of a ‘miracle worker.’ The raw frustration and desire to shed light on Helen’s dark world, was evident in Younger’s every move.

It’s water that inspires Helen to finally understand how to communicate with the world and I doubt there was a dry eye in the house by the end of that scene.

Rebecca McWilliams, directs this production.  She excelled at evoking such incredible performances from the cast.  Unfortunately, though I rarely view a set as a hinderance in a show, this particular set design was such a distraction, trying to fit 10-pounds of feed in a 5-pound sack, as the saying goes.  In an effort to create a large house, it presented an abstract mish-mash and conglomeration of rooms that made blocking and stage movement awkwardly clunky.

The Miracle Worker, is a timeless drama that reminds us of the resilience of the human spirit. This production and these performances make this a show that you don’t want to miss

The Miracle Worker is running through October 9, 2022 and is highly recommended for audiences of all ages.