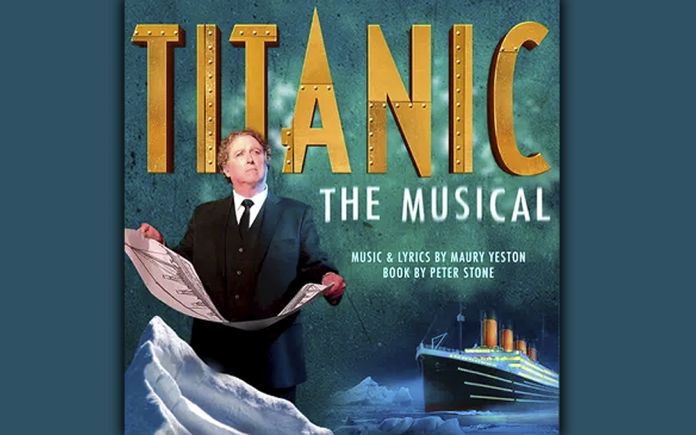 The name Titanic is derived from the Titans of Greek Mythology.   Built in Ireland, the Titanic was an Olympic-class ship.  Deemed unsinkable… until it did.  In April of 1912 it was launched and set sail from the United Kingdom to New York City with 2,224 passengers and crew.  The mega rich who could afford first class accommodations and the not so wealthy immigrants, traveling in third class below the ship’s boughs, dreaming of a better life in America.

The history of the Titanic is not a fairytale, with a ‘everyone lived happily ever after,’ ending.  It is the tale of hope, courage, and deadly fate. To imagine such a story as a stage musical is a challenge.  In 1985, the wreckage of the RMS Titanic was discovered about 370 miles off the coast of Newfoundland at a depth of about 12,500 feet beneath the surface of the Atlantic Ocean. This attracted the interest of musical theatre composer Maury Yeston, who teamed up with book writer Peter Stone and in 1997, Titanic the Musical opened on Broadway and subsequently won five Tony Awards.

The launching of Palm Canyon Theatre’s production of Titanic the Musical on Friday, September 30th is a breathtaking endeavor. With a 40+ member cast, it is overwhelming at times to recognize the breadth of this historic tragedy.

A cacophony of voices tells the stories of Titanic’s passengers.  The sheer volume of actors makes it impossible to identify all of the individuals who make up this cast.  The number of people on the stage is almost claustrophobic, though perhaps indicative of the tragic event.

But a few recognizable faces stand out in a sea of talent. Laurie Holmes as the 3rd class Irish immigrant Kate McGowan, with the voice of an angel, sings of her dreams for a better life with her rendition of “Lady’s Maid.”  It was one of the most moving songs and by far my favorite. The song gave voice to the hundreds of passengers who could not afford the elegant travel of first class, but whose dreams are recognized in the heart of every immigrant.

David Brooks and Nikki Hock as Edgar and Alice Beane, the second-class passengers who hovered on the edge, admiring the enchanting elegance of the first class.

Jaci Davis and Derrik Lewis who played Ida and Isidor Straus, the founder of Macy’s Department Store.  Kam Sisco performing in the role of Pitmany/The Major, Paul Grant as Andrews, the ship designer and Sheldon Safir, who portrayed Ismay, Director of the Ship Line.  A few of the outstanding performances. 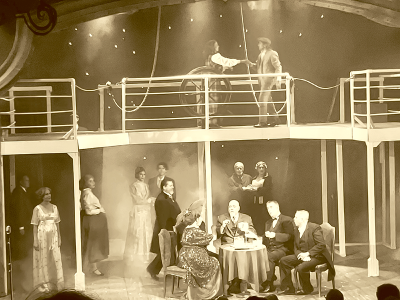 Titanic, reveals the epitome of class oppression.  The first-class accommodations were designed to be the pinnacle of luxury, with a gymnasium, swimming pool, libraries, high-class restaurants, and opulent cabins. With each class of passengers traveling in accommodations that were located further below the waterline with much less luxury.  And when the ship began to sink, she had 20 lifeboats, which would carry 1178 passengers, only half of the number on board. The third-class passengers were not even given consideration when abandoning ship became critical.

Se Layne, undertakes the massive task of directing this show and leaves no question about the skill it requires to stage a production of this magnitude.  The powerful saga and songs wash over the audience as if they are passengers on ship. Crashing waves of emotion, knowing the outcome and yet still hoping for a historical reprieve.

J.W. Layne’s lighting was spectacular, individualized for class and mood, as well as further evoking the emotion of each scene.  Derik Shopinski’s costume design transports the viewer to another era.