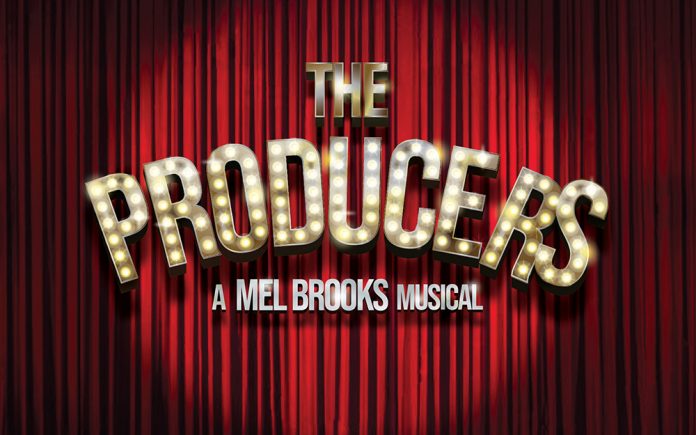 Since its first production in 2013 and continuing with its move to the Indio Performing Arts Center (IPAC) in 2017, Desert Theatreworks (DTW) has continued to grow and produce incredible community theatre in the Coachella Valley.  Under the direction of CEO Ron Phillips-Martinez and Artistic Director, Lance Phillips-Martinez, Desert Theatreworks has produced 45 full productions.  With the opening of their 6th season, in the beautiful, newly renovated Mainstage Theatre, DTW is offering up Mel Brooks Tony award winning comedy, “The Producers.”

With Book by Mel Brooks and Thomas Meehan, music/lyrics by Mel Brooks. The musical is based on Brooks’ 1967 film of the same name.  Brooks adapted his film into a Broadway show in 2001 when it ran for 2,502 performances, as well as breaking records with winning a stunning 12 Tony Awards.

The Producers, takes place in 1959 and is the story of a has-been Broadway Producer and a nebbish Accountant, who devise a corrupt plan to make millions by producing the worst possible script and taking a hit on the losses, therefore allowing them to write it all off and keep the money.  Unfortunately, their get-rich scheme goes horribly wrong when their surefire flop, “Springtime for Hitler,” becomes a hit. It’s a buddy road trip with a predictable destination, but lots of laughs and good times along the journey.

Under the creative and skilled direction of veteran actress/director, Daniela Ryan, The Producers has got to be one of the best produced shows to open this season.  While I will be honest in saying that I am not a fan of Brooks’ outdated humor and often sexist dialogue, the razzle dazzle, dancing, singing, choreography and overall presentation of this musical is a spectacular event not to be missed.

From curtain up, to curtain down, this cast will grab you by the lapels and refuse to let go.   Michael Picas, in the lead role of Max Bialystock, gives one of the best performances I have seen. His presentation as a somewhat likable, yet unethical hustler doing whatever needs to be done to get the money, will keep you rooting for him even after this becomes his demise and he trades in his tux for striped pajamas. Picas’ singing, dancing and overall showmanship is so captivating that he could be his own one man show and no doubt makes him a contender for upcoming award nominations.

Raul Valenzuela as Leo, Bialystock’s accountant and partner in crime, is an absolute joy to watch, from his first panic attack to his last. And Emily Rose Unnasch, as Ulla, (written as a stereotypical blonde nymphette, whose main purpose is to serve as eye candy,) makes this role her own. She comes across as sexy and upbeat, turning a vanilla role into a chocolate sundae.

Alden Dickey, as the Nazi Playwright, was funny and has a brilliantly strong voice. Loved his solos. Timm McBride as Roger DeBris, along with Roger’s partner,  Carmen Ghia, (Kevin Barry,) definitely took me back to a bygone era of campy elegance.  Their “Keeping It Gay,” number was an audience favorite.

This is a fairly large ensemble cast, making it a challenge to give each the acknowledgment they deserve. But they should all definitely be recognized for their collective energy that makes this show a visual classic.

In addition to Ryan’s incredible directing ability, keeping this show on its toes was the result of some obviously talented professionals.  The choreography was riveting.  Though Susan Storman’s original choreography was implemented, Stacy Cassaluci-Grenrock’s service as choreography adviser, was obviously a great benefit to this production. Rebecca Mc Williams’ costumes were a spot on fit for the era. Michael C. Wilson, as the Musical Director had a massive undertaking with this show and he excelled.  And last, but certainly not least, Nick Wass created a projection showcase that was a character all on its own. Wass’s background images weaved the pieces of the scenes into a coherent fabric.

Desert Theatreworks is back in full swing with an upcoming season that will make you realize how much you’ve missed theatre.  And they have produced a sure hit with this opening of ‘The Producers.’

The Producers is running October 8-31.