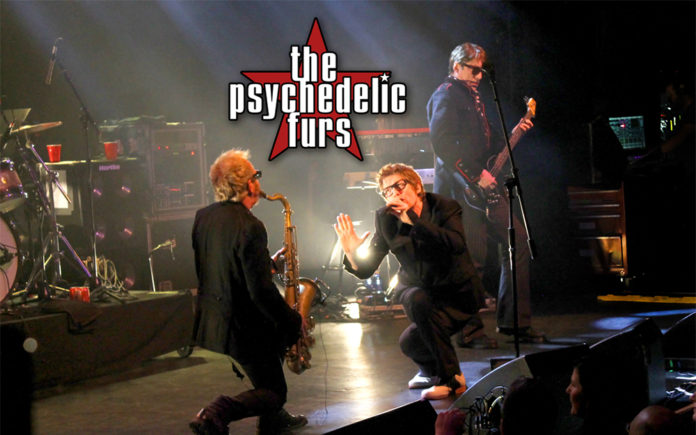 The Psychedelic Furs will be performing on Saturday, March 3, 2018 at the Rhythm Wine and Brews Experience with Stone Temple Pilots, She Wants Revenge, Petty Cash and The Flusters

CVW: What’s going on with The Psychedelic Furs presently?

Butler: “Next week we start up on the next tour and it’s really exciting. We love playing out on the west coast. We were last in that area 11 years ago. We’ll be doing three weeks on the west coast then we come back for a week and then we go and start recording a new album. We have the rough ideas for the songs. Of course we just have to go in and do the final adjustments to them.”

CVW: What are your thoughts about performing on the site of Coachella?

Butler: “Maybe the really cool vibe of the music world will transmit into us with all the bands that have played at Coachella. I loved the idea behind Desert Trip. A lot of cool stuff is happening there.”

CVW: What are your thoughts on the other artists performing at RWBE?

Butler: “We did a tour a few years ago with She Wants Revenge and they were pretty cool guys. And Stone Temple Pilots, I like some of their stuff. I don’t know all of it. Of course, I know their singles and I like those.”

CVW: Tell us more about the new music.

Butler: “It will be The Furs of course. We are always influenced with the music that’s going on around us. It will be the familiar Furs sound but updated. It won’t be stuck in the 80’s when most of our albums were done. This will definitely be Furs for now.”

CVW: You separated as a band for a while. Now you’re back full-force and re-establishing yourselves. How have you navigated the music business?

Butler: “We didn’t want to pressure ourselves. The reason we broke up in the early 90’s was because we got tired of record company pressure to write another “Love My Way” or “Pretty In Pink.” We just wanted to do it how we wanted to do it. When we got back together we were just happy we got back together with no pressure. And record companies slowly thought about the idea, shall we do a new album, and we slowly started jamming around with ideas. We thought that we still have what it takes to bring out what we think is a good album but on our own terms. We’re not going to bring one out and be top of the charts. We just want to come out with an album that will please our fans and us on our own terms.

“That’s why it’s taken awhile. Our first seven albums we did were pretty lasting. They could come out now and still be sort of current sounding, they’re not really dated. I think it’s going to be hard to match the quality of those, but I think what we’re coming up with, we’re going to manage it.”

CVW: What other artists have inspired you and has there been a resurgence of 80’s music?

Butler: “Over the years I’ve listened to bands like The Killers and The Arctic Monkeys. A lot of bands now seem to be influenced by the 80’s music, which I think in the 90’s, 80’s music was a bit of a dirty word. Current bands are starting to appreciate 80’s music again. Admittedly, there are some bad parts to it but some good stuff came out of the 80’s. In the 90’s the metal/rap bands looked down on the 80’s. Now the 80’s are more respected than the 90’s musically.”

CVW: What’s the relationship like with your brother (Richard Butler-vocalist)?

Butler: “It’s a lot easier now because we each have our place in the band that is equally important as the other and so it cuts down on the sibling rivalry and the stress. We’ll walk together in the cities we tour to keep in shape. Also, an hour and a half on stage every night will help keep you in shape. We take things as they come and we’re still happy to be out there touring. We don’t want it to be boring where we’re not giving it our all. We pack it in every night nowadays. We’ve been back together for a while now and it’s exciting to be The Furs again so we put everything into each show. It helps the show because with us giving our all, the audience can feel that and they get into it and it feeds back to us. It makes for a big show. Seeing the audience sing along…there’s nothing better than that, an audience singing along to a song that you wrote 30 years ago. It’s just incredible to me.”

CVW: Your crowd is multi-generational. What else can you ask for?

Butler: “It’s great. We have one person who brought her daughter down to see us and she was brought by her mother so that’s three generations. The granddaughter now has a kid she hopefully will bring her down when she’s old enough. To have that stretch of musical audience is amazing. When you form a band, you never think it’s going to last that long. You think what you write or what you’re playing is never going to make that much of an impact. You can hope, but nothing’s for sure. So after we’ve been together for 35 years, it just amazes us that we’ll get an audience from 16 to 65 and they all know the songs. It’s so gratifying it makes us think ‘wow we’ve actually done something that’s worthwhile and lasting in the music business.’”

CVW: Do you have any concerns with the new music connecting with your fans?

Butler: “You can’t worry about that. You can record your first album and worry about your next album is it going to sell as many albums or get the amount of people to see it. You can’t do it. You just have to be happy with it yourself and hope that your belief in what you’ve recorded will translate and transmit to the audience.”

CVW: Your music is timeless. Has anything changed with how you present your previous material?

Butler: “It depends on the songs. Songs from the album Midnight to Midnight are a lot more stripped down than they were on the original produced album. All the songs are a lot more raw. A lot of people are surprised when they come down to see us and hear how heavy we are. A lot of people who see us know us from” Love My Way” or “Ghost In You.” They’re surprised how heavy we are. We’re sort of heavy in the relation to The Cult and their songs “Rain” and “She Sells Sanctuary.” When we were first touring around in the 80’s the Southern Death Cult used to open for us. Of course the Southern Death Cult turned into The Cult.”

CVW: What artists from where you started do you follow?

Butler: “I still love bands that started out with us like Depeche Mode, U2 and The Church. We just did a tour with The Church and they’re still a really cool band.”

CVW: We have a blossoming music scene in the Coachella Valley. What word to the wise can you provide to our artists?

Butler: “Stay true to your belief and don’t get pushed around by record companies. When we signed to CBS they hated us. We would fight against their suggestions. It could be a single and they say change this or change that. Keep your beliefs and keep at it; if you get picked up or if you don’t. Keep your initial idea and keep believing in yourself. If you don’t believe in yourself no one else is going to.”