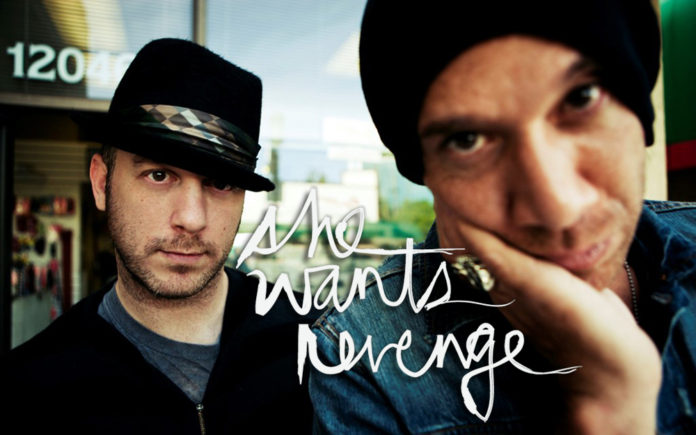 She Wants Revenge to Perform at RWB Experience

She Wants Revenge got their start in 2004. The group was formed in Southern California by Justin Warfield and Adam “Adam 12” Bravin. The group’s debut, She Wants Revenge, was released in 2006 to rave reviews. The album gained immediate traction and included singles “These Things” and “Tear You Apart.”

Both singles had extensive airplay on the radio, and you’d be hard pressed to find someone who doesn’t know the hook:

“I want to hold you close

As I whisper in your ear

I want to fucking tear you apart”

The heavy rotation put She Wants Revenge on the radar of many bands and got them tours with Depeche Mode and Placebo. Their songs also found themselves on TV and Film such as Fringe, The Number 23, and American Horror Story: Hotel. The latter rejuvenated interest in the band and brought them back together after a hiatus in 2012.

She Wants Revenge will be joining Stone Temple Pilots, Psychedelic Furs, Petty Cash, and locals The Flusters, at this year’s Rhythm Wine and Brews on Saturday, March 3 in Indio. Justin Warfield took time to answer a few questions for us.

Coachella Valley Weekly:  What was your introduction to music, and did you immediately know music was the path your life would take?

Justin Warfield: “I grew up in the music industry, as my dad worked in record promotions, so from my earliest memories, not only were there records always playing in the house, but I would go with him to work to radio stations, music publications, in-store signings from bands and artists, and concerts. There was never a time without music in the house or in my world, but I never planned on being involved in the music industry, first and foremost because though I messed around with guitar and drums, I didn’t play an instrument, and beyond that I didn’t think that promotions was something I would be into, so to me the industry was great, provided amazing opportunities and experiences and was sort of just the family business, but I didn’t see myself in it. To be honest, I always imagined I’d make films. So when hip-hop for me started to turn from RUN-D.M.C, Beastie Boys, The Fat Boys, LL, and Doug E. Fresh to Public Enemy, Jungle Brothers, BDP, and Eric B. and Rakim, I started to become pretty fanatical about the music, and through writing lyrics and making beats (along with scratching records in my bedroom), I began to see a lane that perhaps was something I could fit in and contribute something musically and culturally to. But even then it was something I did for fun and I wasn’t planning on doing for a living… that is until a dear friend named Kev Hicks read something I’d written and suggested I maybe take it more serious.”

CVW: Your career is all over the place in terms of genres. Did you always have it in your mind to explore such a broad spectrum of genres?

Warfield: “Not really. As I said, I started as an MC and doing hip-hop because it was what I was passionate about and what I could technically do and was good at. From 88-92, I was pretty much consumed by hip-hop and didn’t let much else in except for the occasional alternative rock album or my go-to classic rock LP’s. Mind you, hip-hop was in its golden era, so it was easy to be absorbed by it both as a listener, participant, and someone who went to live shows, but as my tastes grew to include Sonic Youth, Jane’s Addiction and some other stuff that hit me hard, the pull to create music like that drew me towards the guitar and songwriting beyond sampling, making beats and rapping. Singing didn’t come easy for me, and it took a lot of work to not totally suck. I played in bands around town and did shows, lugging amps up and down stairs, in and out of rehearsal studios, and really put in the time to learn not only how to play my instrument decent enough to get up in front of people, but how to play with other musicians, write songs, and sing half-way decent enough to get booked on a show, make a flyer, promote it, show up, and do my best to approximate what was in my head. Stylistically I’ve always done whatever felt right at the time, so whether that was British influenced classic rock, psychedelic hip-hop, or anything else, it was never planned, it stemmed from an internal urge to make something, and consequences, career or success, be damned.”

CVW: How did She Wants Revenge form?

Warfield: “Adam and I had known each other from growing up in the same part of town. I first met him when I was at a party he was DJ’ing in 1987. We didn’t become friends right away, but we bumped into one another for the next 15 plus years. During that time he was managed by a close friend of mine who suggested we work together, and though we tried to connect a few times between the mid-90’s and early 2000’s, it wasn’t until hanging out at that mutual friend’s house one day she brought it up again and we said, ‘fuck it, why not’, and went back to my apartment to try writing music together. Something clicked that time. Partially because of where we were at musically and in life, partially because it was probably just meant to be and the right time, but except for some time where we went our separate ways to pursue other projects and take a break, we’ve been working together for almost 15 years now.”

CVW: Were you surprised by how quickly She Wants Revenge became hugely successful?

CVW: You guys announced an indefinite hiatus in 2012. What brought you back together?

Warfield:  “The combination of American Horror Story using “Tear You Apart” in its entirety for what amounted to an SWR music video starring Lady Gaga, and it being the 10 year anniversary of our debut album. If ever there was a time to get back together, that was gonna be it.”

CVW: What are your plans for the immediate future? New She Wants Revenge music? Solo work?

Warfield: “As for new SWR, we’ll have to wait and see. Nothing solo for me, but last year I released an album from a band I had for the last 4-5 years called, Dream Club, and though that project was very special to me and pretty fucking incredible, it came to an end. Now I’m working on a new project with my oldest friend which will probably see us releasing an EP this year, as well as a secret project that is too early to talk about. Adam has a solo project called Love, Ecstasy and Terror, and he’ll probably release that full length sometime soon. He’s been playing shows and it’s really good. Fans of She Wants Revenge will definitely connect with it.”

CVW: What are you listening to now that your fans may be surprised by?

CVW: Have you played in the desert before? Or visited? Can you tell us a bit about your thoughts of the Coachella Valley?

Warfield: “Dream Club (my last band besides SWR which I just mentioned) played Rhythm Wine and Brews and had an amazing time a few years back, and SWR played Coachella in 2006 and 2011. Those are for sure musical highlights. The founders of RWB are very dear friends of mine and everything they do, (The Date Shed, RWB, Coachella) is always amazing and loads of fun, so I’m really happy to be playing RWB this year, as it’s a very cool festival musically, a great vibe, and the Furs just so happen to be one of my biggest influences, so it’s exciting to play with them again. As a fan of music, I’ve been coming out this way since I was a kid camping in Joshua Tree and hiking in 29 Palms, so I’ve always felt a connection to the area, and more specifically, I’ve been coming to the Coachella Valley since the first Coachella festival when it all started almost 20 years ago, and I come almost every year, so I really enjoy my time here. There’s some great food, really cool people, beautiful surroundings, and a real openness to music, so I love it. What’s also great is that after coming here for so long, I really know my way around and know the good vintage shops, restaurants, places to get coffee and hang, so I don’t just feel like a tourist passing through.”