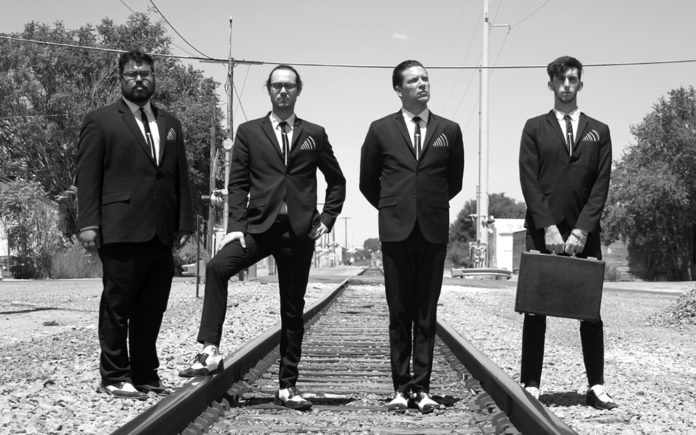 The Flusters to Play at Rhythm, Wine & Brews Experience

I sat down with Dougie VanSant, Danny White, Mario Estrada, and Daniel Perry of The Flusters to chat with them about their inclusion in this year’s Rhythm, Wine & Brews Experience on March 3. After hanging out with the guys in their studio in Palm Desert, they asked me to stay to listen to a few songs from their set and get a feel for their music. I felt pressure to like their songs – I wanted to mean it when I wrote about how good they are. And I do mean it. They’re damn good. In the dictionary, flustered is listed as: (adjective) nervous excitement or confusion. Their sound is exciting and so uniquely their own, it’s hard to find a point of reference (I wrote down Pulp Fiction Soundtrack/The Shins/Beach Boys/dreamy-indie-surf-rock??). So, I’d say they’re aptly named.

CVW: You’re the only local, original band to be asked to play at Rhythm, Wine & Brews. How did that happen?

DW: “And Mario! Mario kept in touch with the right people and made sure we stayed in consideration. We’d heard we were being considered a month and a half ago and then they made Mario an offer.”

DVS: “I love the bands headlining the event. I got into 80s new wave in the mid-2000s and started listening to the Psychadelic Furs. I’ve listened to Stone Temple Pilots my whole life. They’ve always been a part of my acoustic cover set – especially Big Empty and Interstate Love Song. To see our name up there with them, brings back feelings from Coachella.”

CVW: You’ve covered almost all your bases there, what’s next –  Stagecoach?

CVW: Talk to me about your new music. What is different about your sound now than with some of your older songs?

ME: “We’ve matured. We’re more polished, we have better chemistry as a band.”

DVS: “We have a new drummer. We also used a different studio and a different mastering engineer (Mark Chalecki, who used to work for Capitol Record). We started a Kickstarter campaign that raised $22,000 and funded our national tour, as well as the trademarking of band name and several months of rent in our studio.”

DW: “We did 25 shows over two months. Our songs continue to change and get better through touring.”

DVS: “A live show is its own living, breathing thing. We did post-production and mixing of records after our tour. The tour was this dirty, imperfect, sloppy thing. Then the minute we got back, we were as tight as can be. We got to watch back our shows and see where it was sloppy to see what we could tighten up. It was like a football coach playing back game tape. We took a critical eye to everything, down to our stage moves to decide what could be improved.”

CVW: What happened in Mexico sounds like a bummer – what’s next for the Flusters doing a show? 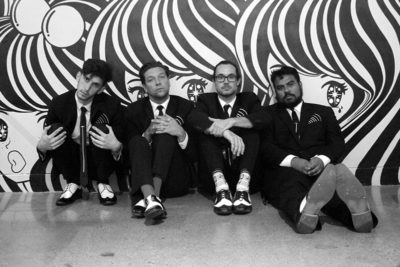 DVS: “Our first show in Mexico was great. We played at The Moustache with some great bands and the crowd was great. This last show was supposed to be at Nonis in TJ, so we packed the bus and for security wanted to be together. Due to our car registration, we were unable to cross the border. We turned around to head back, and the bus goes out of control. All the lug nuts flew off one of the tires. We had to call 911 and since the car was un-towable, we had to haul our RV back home. We’re gonna go back down and do a redemption show – date TBD.”

CVW: Talk to me about your rehearsal space.

DVS: “We’ve recently opened up our rehearsal space to local acts. It’s plug and play and available 24/7. We’ve had Black Water Gospel, AMP bands, brightener, Majid Jordan (signed to Drake’s label) all in here. It’s cool to be among colleagues. More importantly, our space is for local musicians by local musicians. Perry had a trio last night in here recording demos. News is spreading we have this affordable resource.”

DVS: “Lisa (Morgan) has always been a diehard fan and avid supporter. Tomorrow’s gig is an EP Release party for Black Water Gospel, a band we’re close friends with. We’re among the first set of local, original bands they’ve ever had play there. It’s encouraging.”

CVW: Where do you see your band a year from today?

DVS: “We’re sending songs to labels, distributors, blogs, magazines. Once we’ve worked with a distributor who can digitally move our music around the world, we’ll be on a higher level and see where that takes us. In a year I can’t wait to see how this method of distribution works for us. I’m excited.”

Catch The Flusters at Rhythm, Wine & Brews on March 3. Then catch them at any of their other shows around the Coachella Valley. Support local bands. Especially when they’re this good.