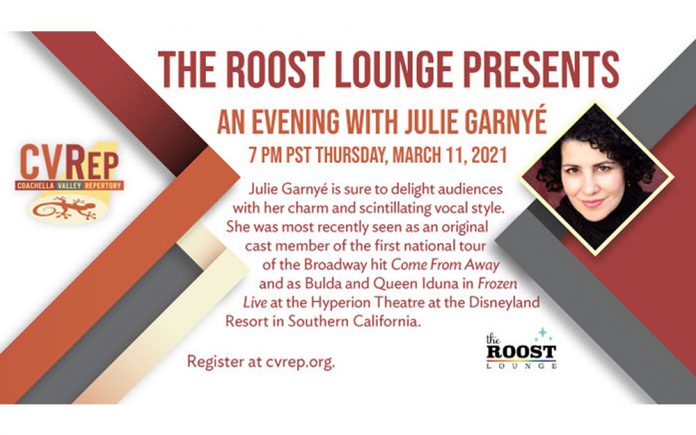 The Roost Lounge Presents: An Evening with Julie Garnyé on Thursday, March 11, 2021, at 7:00 PM PST. Julie Garnyé is sure to delight audiences with her charm and scintillating vocal style through Zoom! Garnyé is a magnificent actress, singer, voiceover artist, writer, producer, director, and is the closest thing to meeting a real-life Disney character. She was most recently seen as an original cast member of the first national tour of the Broadway hit Come From Away and as Bulda and Queen Iduna in Frozen Live at the Hyperion Theatre at the Disneyland Resort in Southern California.

At the end of the cabaret, attendees will be able to participate in a Q&A session with Garnyé. Register for this free, one-hour virtual event at cvrep.org. 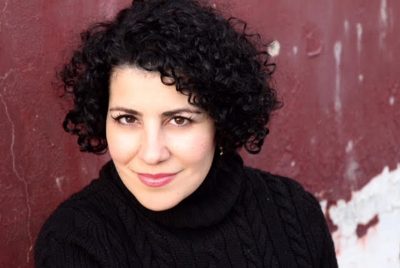 Julie Garnyé was a part of CVRep’s Summer Cabaret series in 2016 and starred in the dazzling performance in CVRep’s production A Class Act. She is also the singing voice of the fairy Lyria in the Tinker Bell series of films for Disney Animation. On television, Julie most recently appeared as an original cast member of FATWA!, the Musical during season nine of Curb Your Enthusiasm. Julie was also the “In Memoriam” soloist for the 2016 Daytime Emmy Awards telecast and was a part of the Les Misérables ensemble for the Academy Awards (The OSCARS) telecast in 2013.

Talent photo and bio are attached. Interviews are available upon request. Contact the Marketing Department at CVRep, (760) 296-2966, extension 119.

Next week, Glenn Rosenblum will return to CVRep’s virtual stage with an all-new Broadway Showstoppers with “More Dancing!” Join him for this fun and enlightening evening about the most popular dance productions seen on Broadway. Register in advance for this free one-hour, virtual event at cvrep.org.