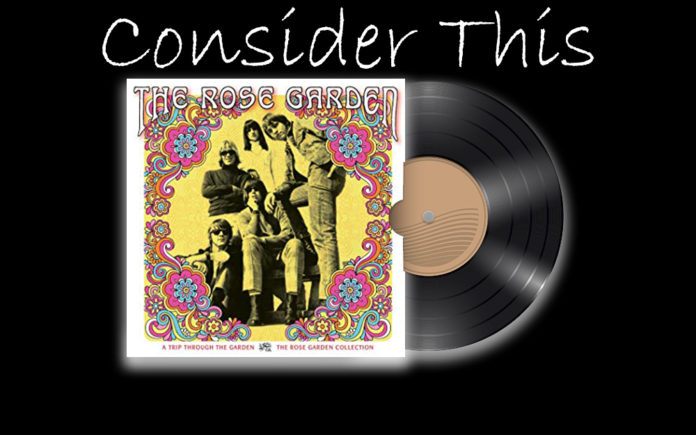 If you were a kid in the late ‘60s and early ‘70s, chances are, you tuned in to “The Mary Tyler Moore Show” on Saturday nights. Ahhh Mary…with her prim mini-dresses and her tasteful flip. She seemed like the epitome of 1970s single-hood. She had her perfect little studio apartment situated in that beautiful Victorian house, with the shag carpet, the jaunty “M” on the wall and the stylish “hi-fi” perched on her bookshelf ledge thingy.

Perhaps you wondered what records Mary played in her down-time, away from the hustle and hi-jinx of the WJM Newsroom. It’s a safe bet she wasn’t spinning any Zappa or Captain Beefheart. Most likely Chicago, the Sunshine-y sounds of the Free Design, some soulful O.C. Smith or the Fifth Dimension. The Carpenters definitely made the cut, maybe if Mary was feeling peckish she dug into the stentorian melodrama of Blood, Sweat & Tears. There’s no doubt she also listened to The Rose Garden album.

The Rose Garden sprung from a deep friendship. Childhood friends John Noreen and Jim Groshong grew up together in Woodland Hills, deep in the San Fernando Valley. Inspired by the Folk music trend that began to gain traction in the late ‘50s and early ‘60s, the pair began playing ukuleles together before graduating to guitars. Initially a fresh-faced Folk duo, they tightened their sound playing instrumentals at Hootenannies. Then the Beatles performed on “The Ed Sullivan Show” and blew their minds.

Rather quickly, they added vocals and recruited drummer Bill Bowdin (three years their senior). They called themselves the Marauders. The trio cut their musical-teeth playing Bar Mitzvahs, birthday parties, school dances and church youth group events. By 1965 they augmented their line-up with bassist Bill Fleming.

The four-piece were still heavily influenced by the Fab Four and other British Invasion bands. But they also became enamored with the emerging Folk-Rock sound spearheaded by local sensations, the Byrds. John talked his folks into financing part of the cost of a prized Rickenbacker guitar, so he could emulate his hero, Roger McGuinn’s  signature guitar tone. At this point, they ceased being the Marauders and became the Blokes.

A few months later the Blokes were playing an Open Mic at the storied Ash Grove club. They happened to play a couple of Byrds covers when they spied Byrd vocalist Gene Clark at the bar. He responded so positively to their renditions he joined them on stage to help finish out their set. Needless to say, the crowd went wild.

By this time Jim was 18 and had begun exploring the fertile Hollywood music scene. He met Diana De Rose, an aspiring singer who had relocated from West Virginia in search of musical stardom. The pair began to harmonize and romance blossomed. Rather than start a new group together, Diana was folded into the Blokes (despite some reservations from John). Clearly, a name change was in order.

The five-piece became The Rose Garden, a nod to the newly emerging Sunshine Pop genre which included The Association, the Mamas & The Papas and the Strawberry Alarm Clock, it was also a clever play on Diana’s last name. The band began gigging more frequently in Hollywood and along the Sunset Strip. New managers Charlie Green and Brian Stone, (who also steered the careers of Sonny & Cher and Buffalo Springfield), secured a record deal with Atco, a subsidiary of the Atlantic label. Things were moving at a quick clip.

Like other bands of the era, The Rose Garden didn’t really write their own music. Much like the Monkees and The Fifth Dimension, they relied on outside songwriters to provide their songs. But once they got started recording, they insisted on playing their instruments, instead of leaning on studio pros.

Recorded at Gold Star Studios and Nashville West, both located in the heart of Hollywood, their self-titled debut arrived in January, 1968. They toured behind the record and the first single, “Next Train To London” peaked at #17 on the Billboard charts. They scored an appearance on “American Bandstand” and other groovy television shows, and began working on a second album. But tensions within the band, (management kept pushing Diana out front when the rest of The Rose Garden, understandably wanted the focus on all five members), slowed their progress.

Their momentum screeched to a halt when Jim and Bruce each received their draft notices. Both went through the rigorous process of being declared “conscientious objectors.” Their pacifist stand exacted a price, they were each required to serve two years of “alternative service” at a facility for troubled youth in Oregon.

Of course, this put the kibosh on The Rose Garden. Diana pursued a solo career, but actually had better success as a professional Bridge player. Jim started a construction company, Bill became a police officer for the bedroom community of El Segundo, and Bruce worked for the rapid transit system in Dallas. Only John continued a career in music, mastering the pedal steel and working as a touring and in-demand session musician.

Long out of print, The Rose Garden’s only album has recently been re-issued through Omnivore Recordings. The original 10 song set has been augmented by a whopping 16 bonus tracks. Fittingly, the collection opens with their first single and only Top 20 hit, “Next Plane To London.”

Tumbling drums fold into a relaxed rhythm, buttressed by jangly guitar. Departure announcements seem a bit gimmicky and nearly distract from Diana’s plaintive vocals, which are front and center. Lamenting the perils of Hollywood, and the futile quest for stardom, she sacrifices love for ambition; “Maybe over there I’ll get a start, only hope by leavin’ I don’t break his heart/The more important part, than any record on the chart.”

Three tracks split the difference between earnest Folk Rock and buoyant Sunshine Pop. “Flower Town,” the only song written by the band, is a variation on the Folk standard, “Portland Town,” recently popularized by stripe-y shirt favorites, the Kingston Trio. Propelled by shimmery acoustic guitar, a kick-drum beat and dissonant harmonies, the lyrics’ gentle anti-war sentiments; “Had children one, two three, yes I did/They sent them away to war, ain’t got no kids no more” offer pointed commentary on the Vietnam conflict.

“February Sunshine” layers spiraling 12-string acoustic guitar over a jaunty, tick-tock rhythm and lilting woodwinds. Free-wheeling and effervescent, it’s best not to examine the lyrics too closely, as they veer into Greg Brady territory, (think “Clowns Never Laughed Before”). They include this incongruous couplet; “February’s the happiest time of the year, Easter Bunny’s hoppin’ and floppin’ his ears.” Um, okay.

Meanwhile, “Coins Of Fun” wears it’s Byrds influence on it’s Buckskin-fringed sleeve. Jingle-jangle Rickenbacker chords wash over tensile bass lines and a rock-steady beat. Jim, Diana and John’s vocal blend lend a symbiotic sweetness that almost distracts from ambitious, jabberwocky lyrics. “Lucy In The Sky” imagery takes the long way ‘round to hint at post-Summer Of Love ennui; “When love is spent across a thousand sunny warm Julys, the heart grows tired of azure skies/When thrills are caught in every nameless, noisy, dim-lit place, tall grows the touch and slows the pace.”

The band tackles two well-known songs, “Rider” and “She Belongs To Me.” The origins of former, sometimes known as “I Know You Rider” or “I Know My Rider” can be traced back to the Blind Lemon Jefferson song, “Deceitful Brownskin Blues.” By the ‘60s, it had been co-opted by everyone from Joan Baez and the Kingston Trio to the Byrds, (whose version remained unreleased until the late ‘80s). The Rose Garden’s rendition opens with gorgeous chiming guitars before locking into a percolating rhythm. Their arrangement pivots through a series of aural switchbacks accented by Jim and John’s fluid guitar interplay.

The latter, is, of course, Bob Dylan’s slightly caustic ode to an independent woman, he alternately worships and disdains. Sweet acoustic arpeggios and a thwoking beat envelope the loping melody. Jim takes the lead here, his quiet sincerity a world away from Bob’s mercurial mien. On the instrumental break the drums add a dropped beat and the guitars downshift, giving the song a South of the Border flavor.

The album’s (original) final three tracks prove to be the highlights. “Look What You’ve Done” is from veteran songwriter Wes Farrell (best known by late 1970 for writing the Partridge Family’s “I Think I Love You”). Sun-dappled guitars crest over winsome harmonies that nearly camouflage the lyrics’ stinging rebuke; “I gave you my heart and soul, you wanted diamonds and gold.”

The band’s tenuous connection with Gene Clark grew stronger when he offered them a couple of songs to record. “Till Today” and “Long Time.” “….Today” is the most winning.; a tangle of guitars collide with a foot-stomping beat before locking into a Country-tinged Flower Power Psych Pop groove. The lyrics offer a bit of romantic reflection; “Like a mirror under the sun, the time reflects back all that I have done to understand I guess I’ll just go past this time for(n)ever, come tomorrow and today is far behind”

Finally, “Long Time,” another Clark composition closes out the original set. Rumbling bass lines connect with ringing guitar riffs and a propulsive rhythm. Diana’s vocals are forceful and out front, searching for meaning in a cynical world. The track has that anthemic late ‘60s vibe that sandwiches somewhere between the Youngbloods’ “Get Together” and Buffalo Springfield’s “For What It’s Worth.”

The re-issue’s 16 additional tracks include material that was being recorded for their follow up album. They range from the gorgeous “If My World Falls Through” to the wildly optimistic “Here’s Today” to the slightly icky “Charlie The Fer De Lance,” (which features the kind of flute action only “Anchorman” Ron Burgundy could love). They acquit themselves nicely with a surprisingly muscular take of an unreleased Buffalo Springfield tune, “Down To The Wire.”  They also manage a light touch with the slightly heavy-handed anti-war diatribe, “The World Is A Big Playground,” they’re less successful with “Dead Men Never Die.”

Along with a couple of alternate takes of tracks found on The debut, the bonus tracks finish with a live set that includes their hit,  “Next Plane To London,” as well as credible versions of Byrds favorites, “(So You Want To be A) Rock N’ Roll Star” and “She Only Cares About Time.” It winds down with Sonny & Cher’s Phil Spector pastiche, “It’s The Little Things” and a Psychedelicized take on Bo Diddley’s “You Don’t Love Me.”

1968 was a watershed year for Rock N’ Roll. Debuts from the Band, Big Brother & Holding Company (featuring Janis Joplin), Creedence Clearwater Revival, Fleetwood Mac and Neil Young were released. Game-changing efforts like the Byrds’ “Sweetheart Of The Rodeo,” Johnny Cash’s “At Folsom Prison,” Simon & Garfunkel’s “Bookends” and the Zombies’ “The Odyssey & The Oracle” hit the record store racks. Not to mention soon-to-be-classics like the Beatles’ self-titled “White” album and “Beggars Banquet” from the Rolling Stones. No wonder The Rose Garden got lost in the shuffle.

But 50 years on, their album offers a snapshot of the times. Sure, 1968 was chaotic and tumultuous, as assassinations, riots, marches and protests became the benchmarks. The Rose Garden felt like a quiet moment in the sunshine. It still does.