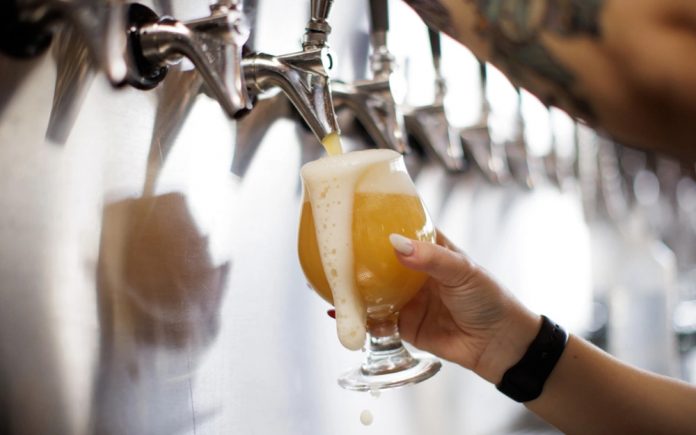 First in a series

The holiday weekend started me thinking about traditions, and as an older brewer my thoughts drifted where they always seem to go…to beer.

Over the next four weeks, we will cover the twenty most influential American craft beers ever brewed based on my 29 years in the industry. This list is entirely mine and reflects my opinion only. Rebuttals and suggestions are encouraged and my email address appears at the end of every column. This week we will tackle the first five starting at the bottom of the list:

Tony Magee, the flamboyant and shameless founder and owner of Petaluma based Lagunitas has never been one to hide his disdain for authority or to mince words so I will let him tell the tale. “The ABC agents revealed themselves on the eighth night of our St. Patrick’s Day party in front of about 350 friends. The (pot) smokers were outside – since there is no smoking inside the brewery and they all had good manners – when out came eight shiny badges. In an instant, the bartenders recognized them as the heavy drinkers from past weeks. The agents cuffed the group in the smoking circle and cited a twenty-year-old woman who was holding a beer for her twenty-three-year-old husband while he went to the bathroom.”

Lagunitas was shut down for twenty days, and used the time to install a new bottling line while Tony began working on a new seasonal release to be named the Undercover Investigation Shut-down Ale. An oxymoronic “Imperial Mild” brewed to commemorate the ’05 St. Paddy’s Day Massacre. Defiant as to style…the brewer can say for sure it is unforgiven and unrepentant.

Ask most baseball lovers what Cooperstown, New York is known for and they will reply, “The Baseball Hall of Fame”. After all, the great American pastime was invented in the little burg, so who could blame them? Brewery Ommegang, founded by Don Feinberg and Wendy Littlefield, began brewing in Cooperstown in 1997 with the focus on Belgian styles.

Hennepin lays claim to being the first Saison brewed in America and in my opinion is still the very best. Cave-aged Hennepin took home the 2004 Great American Beer Festival Gold Medal and is still considered the benchmark of the style to most American brewers. Ask me for a blanket food-pairing beer for anything from Thanksgiving day to Fourth of July, my first inclination is to always suggest Hennepin.

When Larry Bell opened his homebrew store in 1983, there was no possible way to foresee his brewing future. He began selling his beer (brewed in a 15-gallon soup kettle) in in September, 1985 and has become the 6th largest craft brewer in the nation. Originally incorporated as The Kalamazoo (MI) Brewing Company, Bell’s is Michigan’s oldest and largest brewery and is also know for other acclaimed beers such as Oberon and Hopslam.

Two Hearted is named for the Two Hearted River in Michigan’s Upper Peninsula and was first brewed as a winter seasonal in 1997 and making it a year around production beer required nearly as many twists and turns as it’s namesake river. John Mallet became Bell’s Brewmaster in 2004 and has perfected the all-Centennial hop recipe during his two-decade tenure (he started at Bell’s in 2001).

Don’t just take my recommendation about this brew; Zymurgy magazine, the official publication of the American Homebrewers Association, rated Two Hearted as the #2 IPA in the US from 2010-2016 and #1 from 2017 through this year.

Fritz Maytag saved Anchor Brewing in 1965, just days before the iconic brewery was to close its doors for good. However, saving the fabled spot, first founded in 1896, would take more than Maytag’s small fortune as the brewer was not necessarily known for producing great beer. Fritz spend many months in England, learning the brewing trade and brought home the necessary tools for producing a great, consistent product.

Old Foghorn was one of the very first Barleywine’s produced on American soil post-Prohibition and getting label approval from the government left the tiny brewer tied up in knots. Since the word ‘Wine’ appeared on the label and no grapes were used in the process, it seems the best they could do was use the lexicon “Barleywine – Style Ale” on the label. Since 1975, this beer has been the flagbearer for English style barleywines.

Plinius the Younger, a lawyer, author, and nephew of Plinius the Elder, was raised and educated by his namesake. The Elder, known for his 37 books in a compilation of Natural History, was one of the very first to categorize the many varieties of hops. His work was summarily completed by The Younger…and honored as the namesake of one of the first Triple IPA’s ever produced.

Russian River founder and Master Brewer Vinnie Cilurzo first brewed The Younger in 2005, but the beer achieved official cult status when BeerAdvocate.com named it as the best beer in the world in 2009. Since that time, beer aficionado’s have been lining up for a taste of this golden nectar every February for it’s once-a-year release. Is it really that good? Yup, I’ll see you next February!