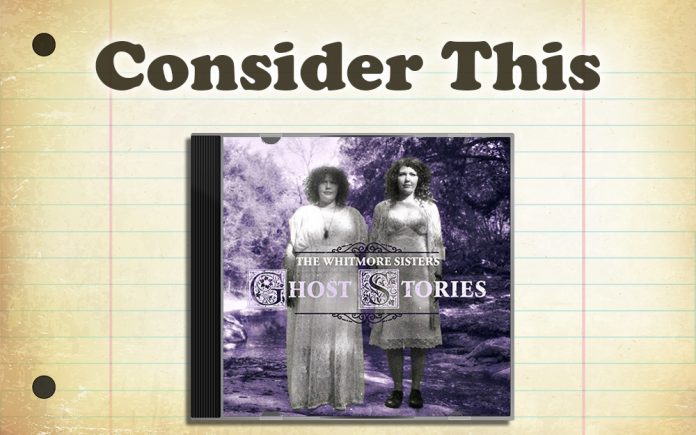 “Can we be erased? It’s all borrowed time, no matter how we get there, no matter how we get there it can all turn on a dime, everybody goes when it’s their number, we can only guess when it’s time/But as long as I am able, I will carry you, and I will carry, carry on” That’s the Whitmore sisters offering a phlegmatic take on life, death and loyalty with the song “Friends We Leave Behind,” from their debut record, Ghost Stories.

Somewhere between the McGarrigle Sisters, The Roches, Sweethearts Of The Rodeo and First Aid Kit, stand The Whitmore Sisters. Siblings Bonnie and Eleanor began making music together as children and have spent the last decade or so carving out separate careers as musicians. Bonnie took the solo route and Eleanor partnered with her husband Chris as The Mastersons. Ghost Stories is their first collaboration as adults.

The Texas natives displayed an affinity for music at an early age, which made perfect sense. Their dad, Alex, was a Folk musician and their mom, Marti, was a trained Opera singer. The family band was known as Daddy & The Divas. Individually, Bonnie and Eleanor made their bones in clubs, dive bars and Honky-Tonks. Solo, Bonnie has released four critically acclaimed efforts. Along with Chris, Eleanor has also made four well-received albums.

When the pandemic hit, Bonnie prepared to hunker down with Eleanor and her husband in L.A., Chris issued only one edict: if Bonnie was going to stay with them, it was time for the sisters to make an album together. The result is their first, official long-player, Ghost Stories.

The record’s first four songs hopscotch through a surfeit of styles. “Learn To Fly” opens with a rat-a-tat drum roll, reverb-drenched guitars, thready bass and soaring Mellotron notes. Sisterly harmonies wrap around lyrics that liken life to an amusement park attraction; “If you want to ride roller coasters you must grow so tall to ride, anticipation, adrenaline racing, knuckle up, you wanted to fly.” On the break, cascading mandolin licks and bramble-thick guitar unfold in a graceful pas de deux, before Bonnie and Eleanor add one final observation; “It takes calculation, line up in formation, a certain swagger comes to mind, careful the wager, but you love the danger, buckle up, it’s time to fly.”

Splitting the difference between Acadian grace and Appalachian grit, “The Ballad Of Sissy & Porter” is a bit of a back porch ramble. See-saw fiddle collides with jangly guitars, plush organ, wheezy accordion, walking bass lines and a clickity-clack beat. Spare lyrics sketch out the saga of Sissy, “fire in her hair, a little sparkle in her eye” and Porter who “was as loaded as a hot deck.” The pair team up for a life of adventure, but their big plans unravel rather quickly; “Lights on the porch, burning all night long, Sissy says ‘Porter, baby play my song,’ with a wish and a hope like a charm against the pain/Just like a storm when it’s blowing in, it’s over just as fast as it began, every now and then Sissy thinks about Porter and the sound of the pouring rain.” On the break, serpentine guitar riffs weave in between swoopy fiddle and je suis un francais accordion. 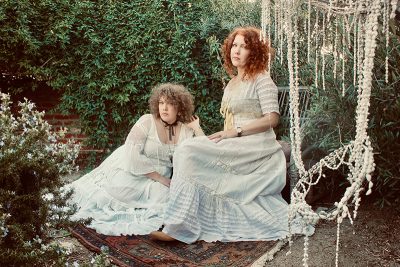 Plaintive piano notes are bookended by feathery acoustic guitars, burrowing bass, lithe banjo licks and a tambourine shake on the aforementioned “Friends We Leave Behind.” Tender vocals shiver and ache as the shadow of death peers over their shoulders. A mordant meditation on mortality, the lyrics insist we take our measure not from the riches we’ve accrued, but from the friendships we’ve sustained; “Everybody dies, suffering all around, love can pull you through and fear can take you down/The friends we leave behind, it’s what defines us, how many will there be when we’re gone?”

Meanwhile, “Hurtin’ For A Letdown,” navigates the rocky shoals of romance. This twangy two-step shares some musical DNA with the Dwight Yoakam classic, “It Only Hurts Me When I Cry.” Brawny guitars are enveloped by liquid Hammond B3, Mellotron and piano, swelling strings, thrumming bass and a Jackrabbit beat. Perspicacious lyrics tell the story starry-eyed self-sabotage; “Now I could tell that you were just my type, deeply unavailable is my plight, if I never cross your mind, well that suits me just fine, I’m addicted to heartache, I don’t want to do what’s right.” Rumbling baritone guitar, whirring Hammond B3 and Honky-Tonk piano match the sisters’ masochistic mien.

A couple of cuts, “Superficial World Of Love and the title-track offer up a bit of Yin and Yang. The former is content to stay in its lane. A Classic Country weeper it’s fueled by stately piano, sepia-toned bass, quavery synths, sultry guitars and a thunking beat. Introspective lyrics share the blame for a shattered romance, hoping one day to bury the hatchet; “Some bright morning when the war is over, we’ll go riding in with shining armor, for a world that’s mostly superficial, I hope you will remember me.”

The latter is more ambitious, unmoored by Country constraints, this ethereal charmer veers into Kate Bush (or at the very least, Frou Frou) territory. Fecund Fender Rhodes notes intertwine with keening violin, descending piano, dour bass lines, slithery guitars and a barely-there beat. Lyrics seem to address long-gone victims of tragedy; “Knowing what you went through, deepens the pain that you’re gone, there’s nothing left but to talk to your ghosts at night/I wish I had known you, it haunts me just the same, I will remember, I will say your name.” On the break the drums lock into a martial kick as assorted strings trill and flicker, adding to the urgency of the final verse; “What if we re-imagine a system that isn’t broken? Reflect on ourselves, see love in everyone.”

The album’s best tracks stack back-to-back, halfway through. “Ricky,” might as well be subtitled “Ricky Don’t Lose That Number For Rehab” (not that this song shares any sonic similarities with the Steely Dan classic). The jaunty melody is powered by gamboling banjo, fluttery fiddle, swirly keys and spiraling guitars. Lyrics tackle the tricky machinations of intervention; “C’mon baby, please won’t you give me the keys? You’re hanging on a wire, set yourself on fire, it’s only Tuesday night, better save it for the weekend.” Things go from bad to worse; “Stranded on the floor, you’re blocking the door, lost your stash and all your cash, only Wednesday night, gonna make it to the weekend?” Finally, the tough questions are unavoidable; “What makes you so broken, what makes you drink ‘til you’re blind?”

“By Design” is deceptively sunny, anchored by a clustering guitar riffs, sparkly piano chords and high lonesome pedal steel. Lyrically, the sistas pull no punches, not everyone is destined for happily ever after, sometimes love doesn’t conquer all; “If you can’t have it you want it, a trick I fall for every time, but you blinked and I caught it, like a broken heart by design.” Melancholy and plaintive in all the right ways, the ache is palpable.

Other interesting tracks include the New Wave-y do-si-do of “Big Heart Sick Mind,” and a lovely take on the Everly Brothers final hit, “On The Wings Of A Nightingale.” The album closes with the celestial sorrow of “Greek Tragedy.” Rippling strings are wed to revved-up guitars, plangent piano, slippery bass lines, lush Mellotron tart harp accents and a thudding rhythm. The majestic melody and arrangement nearly camouflage lyrics that offer a restless farewell to someone gone too soon; “Bound to the sins can’t circumnavigate the end, could you not survive yourself? Your body let you down.” Honeyed harmonies almost soften the blow of saying goodbye. It’s a tender and bittersweet finish to a great record.

Ghost Stories was produced by Chris Masterson. The Whitmore Sisters were ably backed by Tyler Chester on Mellotron, organ and all manner of keys, Jamie Douglass on drums and percussion, Dirk Powell on accordion and triangle, Jon Graboff on pedal steel and Hattie Webb on harp. Between them, the sisters added mandolin, guitars, fiddle, bass, piano, synthesizer, strings and Fender Rhodes. But MVP status belongs to the Chris, who was a veritable guitar army, juggling electric, acoustic, high-strung, 12-string 6-string and baritone guitars.

Honestly, there’s nothing more powerful and pure than sororal (or fraternal) harmonies. There’s something indescribably ethereal, perfect, and simply thrilling when sibling voices connect and collide. Separately, Bonnie and Eleanor have already proved their worth. Together, their symbiotic blend is a true force of nature.