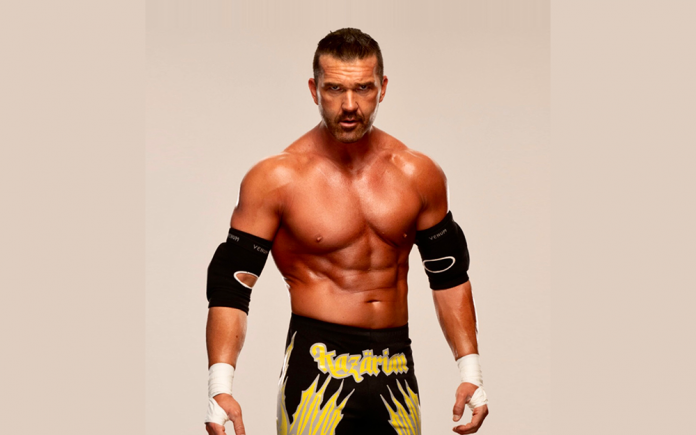 By the time we entered the late nineteen-nineties, the world of professional wrestling was unequivocally not the powerhouse of entertainment it once was. There are those, and I am certain many, who will argue the contrary. However, there is no denying the fact that plush dolls, action figures, t-shirts, magazines, posters, video games, and other professional wrestling memorabilia were emphatically not flying off store shelves as they had during the beginning of the decade.

Professional wrestling pillar stones such as: Hulk Hogan, “The Macho Man” Randy Savage, Mr. Perfect, The Ultimate Warrior, The Big Boss Man, Jake “The Snake” Roberts, Rowdy Roddy Piper, and so many others had experienced so much negative press – and directly from their former employer, wrestling’s true snake-in-the-grass, former WWE chairman, Vince McMahon. Whenever fans viewed their weekly antics in Vince’s rival organization, Ted Turner’s WCW (World Championship Wrestling) they were considered relics, or “has-been’s”. Coincidentally, the wrestlers I mentioned were all in the late-thirties to mid-forties at the time. Most professional wrestler’s today sit comfortably within that age bracket – many higher. Current AEW wrestler Sting is now in his sixties. 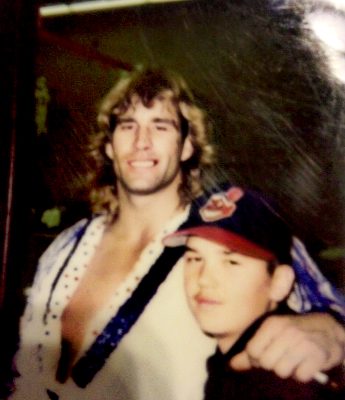 While Frankie and I continued to enjoy the brisk Coachella Valley pre-Christmas weather on my back patio, our conversation walked through the curtain – so to say, of Frankie’s formative training to become a professional wrestler. To recap, in 1998, Frankie traveled to Malden, Massachusetts where he was trained by professional wrestling legend, “Killer” Walter Kawolski.

“The guys in that class were big and it seemed like they didn’t want me there. But I climbed into the ring anyway. My thinking, I’m here now. This is what I’ve been dreaming about. I’m going to give it my best shot”.

Fortunately for the young Frankie, his trainer, “Killer” Kawolski saw something in his protégé.

“After that first class, Kawolski pulled me aside and said, ‘Hey – you’ve got something kid’. I know it sounds cliché, and I thought I was literally living in a Rocky movie, but that’s exactly what happened”. Frankie goes on to say that Killer’s words were all it took. All it took to wash away the tears of Frankie’s homesickness, and any doubts he had made the wrong decision to peruse his dream.

Frankie is a self-professed “home body”, which I feel is an extremely compelling revelation since professional wrestling is a highly extroverted field. If you don’t talk – and if you don’t talk loudly – and in a commanding manner, “brother” your character will undoubtedly be moved to the back of the pack, and then to the outside of the arena – permanently.

“It was a blessing. There I am homesick, the smallest guy in class … I don’t know anyone in Massachusetts, and this professional wrestling legend takes me in”.

Frankie would go on to let me know that over the course of the year he was living in Lynnfield, just outside of Malden, Massachusetts (1998-1999), Killer Kawolski and he developed a tremendous father/son bond. Killer had already entered his “golden years” – as they say, and so within little time of Frankie beginning training at his school, Killer stopped physically training students. “Instead, Killer had some of the guys who had been in training longer instruct class while he dictated from the sidelines”. 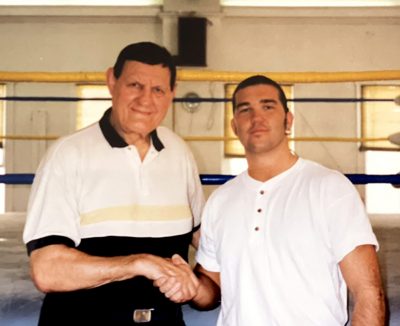 Killer didn’t particularly like to drive and so Frankie became his “driver” from time-to-time, which meant the youngster in training got to spend more time sapping up knowledge from his elder mentor. The two would eat lunch, go the gym, even attend church together.

Frankie learned the ropes of wrestling with relative ease, which naturally led me to pose this question, “How do you deal with all the pain?”

For those who aren’t aware, or who have never set foot inside a professional wrestling ring, know this; that mat, those ropes, and those turnbuckles hurt. I bounced a few ropes, leapt from a few turnbuckles, and went over a few ropes in my time. They really hurt. Frankie’s response to dealing with the pain produced by professional wrestling was: “You’ve just got to be able to absorb and take a lot of pain”. When Frankie said this, I pondered his response in greater detail.

Frankie, like myself, grew up viewing professional wrestlers throughout the eighties and early nineteen-nineties. Many of our former role models undeniably took the beating that professional wrestling dishes out – and it shows. Hulk Hogan has undergone numerous back and hip surgeries. Before his death at age 61, Rowdy Roddy Piper had had a hip replacement, and as professed by his family in a recent A&E documentary, lived in constant anguish from body pain.

Conversing with Frankie regularly has allowed me to garner the knowledge that the active career of a professional wrestler, in terms of travel schedules and actual in-ring time has over the last twenty years changed significantly. For example, professional wrestlers of the era of Hulk Hogan and Rowdy Roddy Piper, traveled approximately 300 days per year. These larger-than-life childhood heroes were virtually absent from their families and children year-round. If they were home, sadly (in some cases), they’d have the urge to want to get back on the road. Perhaps, perpetuated by getting used to the constant beat of travel [all they knew], mentally interrupted what should have been time-spent, relaxing, and enjoying the family. Thus, many of those families were obliterated as a result. Today those same men who are still living and who gave of their time and bodies no longer have the physical or mental enjoyment of life they were perhaps hoping for when their careers began.

As for Frankie, he has truly been blessed. Blessed by the ability to distinguish that his family – wife, and son, are the most endearing and of greatest importance in his life. Blessed by the fact that his current wrestling schedule for AEW (All Elite Wrestling) and Impact Wrestling – although frequent, are yet light enough that travel does not interfere with his family nor, become his addiction.

“Honestly, I feel great! As I sit here across from you at 45, my body feels good. If I can still feel this way in ten years, I’ll still be wrestling. Guys like Chris Jericho are still doing it. One of my closest friends in pro wrestling, Billy Gunn. He’s almost sixty, and he’s still doing it”.

It appears that greater care is being taken with professional wrestlers today as opposed to thirty years ago. Promoters/bookers back then were only interested in making money off the wrestler’s performances. Today with the advent of the internet and social media, greater knowledge about health and wellness, and new labor laws, even promoters/bookers are keener to prolong the lifespan of their performers, rather than using them up and tossing them out at the end of their cycles.

Back to 1999… Frankie is trained and ready to get out there and start making his mark in professional wrestling. He travels back to Southern California from Massachusetts, and back to Yucca Valley [albeit with a lot less savings], but considerably wiser, stronger, and ready to wrestle.

“WWE weren’t interested in hiring smaller guys at the time. WCW was on its way out, but I got some independent bookings”, Frankie tells me concerning his 1999-2000 timeframe.

“How much did you earn per match on the independent wrestling circuit?”, I ask.