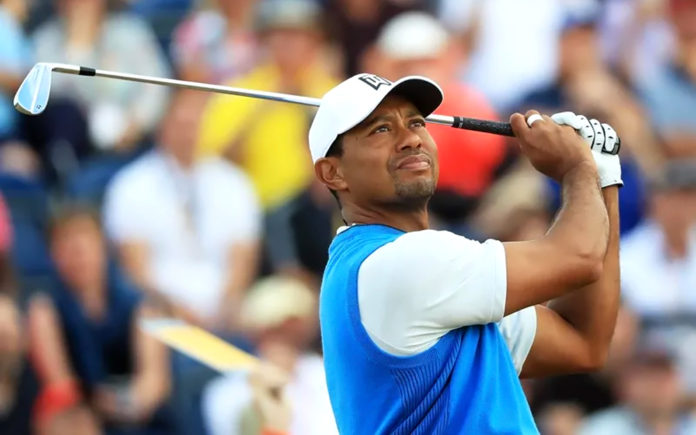 Great storytelling generally follows a three-act structure. First, the setup, when the audience or reader is introduced to the characters and their importance. Next, the confrontation or complication. When those characters encounter an obstacle or face a hardship; and finally, the resolution, the final climax of the characters’ journey. Sound familiar? This is the story of Tiger Woods.

Though that structure is still followed today on stage, in opera, and in film, it doesn’t fit quite so nicely into real life. There are few exact delineations or moments that distinguish one phase of our lives from another. Confrontation and resolution can be tricky. They get intertwined, and become difficult to discern. Sports provides a little more of a framework for narrative structure, as it can be naturally divided into quarters, halves, games, and seasons. But it can still be challenging to know a turning point when you see it. Even with all that in mind, Tiger Woods’s story flipped a page on Sunday at the Open Championship.

Woods entered Sunday four shots off the tournament leaders, in a role many golf statisticians will remind you has never led to one of his 14 major victories—all of those were won with Tiger in the lead going into Sunday. But there was hope. He’d been playing well all week, particularly on Saturday when he recorded six birdies and finished with a 66. This was his best chance at a major championship since he returned to the sport last year following his fourth back surgery in three years. At the 2018 Masters he couldn’t put together any scoring, and after a brutal two days at Shinnecock Hills last month, he missed the cut at the U.S. Open. But with a weird mallet putter in his bag, his putting had looked solid heading into the final round of the Open Championship, and his driving accuracy was promising on a course where there are numerous dangers just off the fairways.

But there was still uncertainty, and that was a new feeling for those of us used to watching the Tiger of yesteryear, the one who held all four major titles simultaneously from 2000 to early 2001, and who was so ridiculously dominant at the 1997 Masters that Augusta National was forced to alter its course. The edges of couches everywhere got a workout as Tiger maneuvered through the front nine on Sunday, finding himself at 2-under par for the day, and, at one point, holding sole possession of the lead at 7-under. He double-bogeyed the 11th to erase the progress he’d made on the front nine, and big names like Rory McIlroy and Justin Rose began to creep up the leaderboard.

Woods didn’t fare much better through the rest of his back nine, and he wound up finishing tied for sixth—his best finish in a major since the 2013 Open Championship. He watched as his playing partner Francesco Molinari finished off his bogey-free round to win his first major. But even though Tiger couldn’t put together that final run to seal the deal, Sunday felt like a move into the third act of Woods’s career. First, there was the Golf God. The second act was marred by injuries, surgeries, and personal complications that made it seem—both to fans and to Tiger himself—that he might never make it back to earlier form.

Then came Sunday, which saw Woods cast in a new role: the underdog. The person who has the tools to win, but has spent so long away from the game that his status as a contender isn’t on sure footing.

When Woods returned to golf late last year, he came back to a sport that had been trying to fill his shoes for five years. Golf is no longer dominated by one person. Jason Day tried, as did Rory, Jordan, DJ, and JT. The talent level across the PGA and European tours is incredibly high, and means that at any given tournament, even majors, we can see the Schauffele, Finau, Kisner, and others near the top of the leaderboard. Golf is no longer a dictatorship—it’s a meritocracy. And Woods is finding his place within that system.

But he’s still Tiger. He’s the person that many of these young golfers grew up watching, still the player older golfers admire and still the guy that can bring hordes of fans out of the woodwork to tune in to a tournament played across the pond, at ungodly hours of the morning. We’ve all seen what he’s capable of too many times to ever really count him out. But this act feels different.

Woods didn’t hoist the Claret Jug, and his game still needs a bit of fine-tuning to approach what it once was, but maybe on another Sunday in the future, Sam and Charlie will be there to witness their dad complete his comeback and finally get that 15th major. It isn’t a given, but after Sunday it feels a little bit closer.