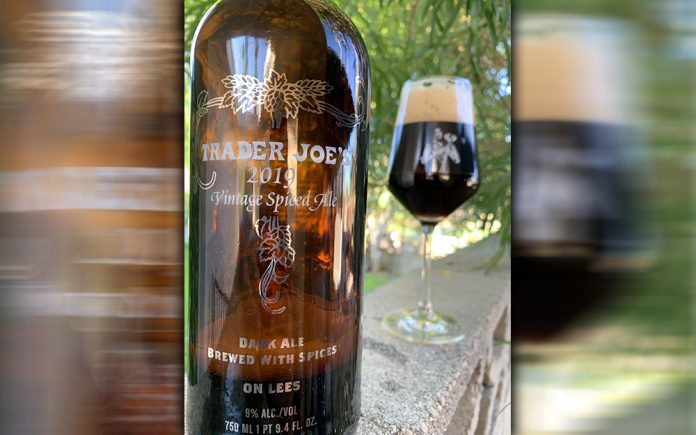 While the point of independent craft has always been to give the consumer an alternative to the mass marketed industry standards, the idea of what defines craft has always been to stay small, boutique; and most importantly, bucking the mainstream. When fizzy, yellow lagers made with corn, rice, and nary a hop were pretty much the only thing you could pick up from the grocery store, micro brewed beers marked themselves as bold, bittered ales in all colors of the spectrum except pale straw. While the American lager was defined by its restrained flavor and adjunct use, American craft ale adhered to the Reinheitsgebot (the German purity in brewing act) as a show of superiority, with the American pale ale being the microbrew standard by the mid-1980’s.

Unfortunately, many microbrewers were amateurs without a deep understanding of brewing science, and the general public quickly became wary of brew pubs that sold poorly made or infected beer. Imported beer became a big trend, with college kids choosing to explore the flavors of European styles rather than domestic offerings. By the 1990’s, American craft had come to appreciate and co-opt the European style, with Belgian-style ales being particularly attractive to create. With recipes that call for fruit, nuts, sugars and spices, Belgian ales are the antithesis of the German brewing style. While there are many small, American breweries that now specialize in Belgian and Abbey ales, the Trader Joe’s chain of stores has carried a house Belgian for years now, and it is as far from the Reinheitsgebot as you can get.

Chambly, Quebec, Canada’s Unibroue specializes in Belgian-style ales, and became popular stateside in the mid to late 90’s when imports were the biggest trend. Formed in 1992, the brewing company has been creating Trader Joe’s annual Vintage Ale series for over 13 years, creating appreciation amongst fans who collect verticals of the series to drink after years of aging. Each 760 mL bottle is packaged in the traditional style of being “on lees” in wine terms, or in regular beer talk, unfiltered and containing yeast sediment in the bottle. This isn’t a practice limited to Belgian ales or wine, Sierra Nevada Pale Ale is famous for having a light ring of sediment at the bottom of every bottle. That sediment is also lees, a signature move that still set’s Sierra Nevada Pale Ale apart from other domestic craft. 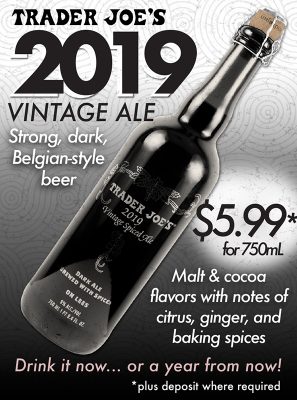 It’s been a tradition of mine to try a bottle of Trader Joe’s Vintage Ale every year, and just like any vintage, there are noticeable changes with each batch. This year’s version features HUGE herbed character, with sage being the most dominant flavor with each sip. Intensely earthy and woody, the unlikely flavor of dark cherry follows the sage, making for a very complex combination. Coriander is a very common spice in Belgian ales and it’s present here as well, showing up alongside the cherry and sage. The spice character in this beer isn’t subtle, in fact it’s almost a little overwhelming for my taste. Trader Joe’s promo for this beer touts’ flavors of malt and cocoa, with notes of citrus, ginger and baking spices. The ginger is redolent in the aftertaste, along with the faint taste of orange peel. Cocoa and baking spices are nowhere to be found, swallowed up by the almost oppressive sage. I have never cellared a bottle of TJ’s Vintage Ale, and I’m wondering if time will temper the heavy sage character, revealing the other flavors that might be sitting beneath it.

With companies like California’s Lost Abbey and Monkish both creating fantastic Belgian-style ales domestically, the import craze is not what it used to be, yet it’s a testament to the skill and ingenuity of Unibroue that their beers continue to have a foothold in the US market. Their contract with Trader Joe’s is a mutually beneficial arrangement, allowing the company to be exposed to a wider audience who in turn gets to try a product that’s simply outstanding for the price point. At $5.99 a bottle, Trader Joe’s Vintage Ale remains possibly the best house beer they carry, and one that’s worth every penny it costs.