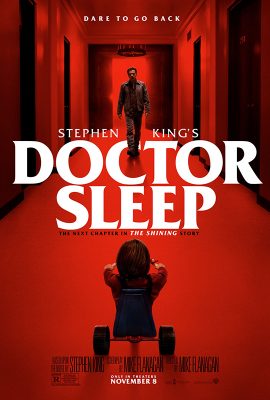 Here’s the bottom line on this unexpectedly satisfying film: if you read Stephen King’s 1977 novel and his recent follow-up novel “Doctor Sleep” and also enjoyed Stanley Kubrick’s film adaptation of “The Shining,” than you will be swept away by not just the story, but also the artful and extraordinary craftsmanship that went into the creation of this compelling horror film that is in essence a true sequel to Kubrick’s iconic 1980 film that also masterfully incorporates both books.

Director Mike Flannagan is an unabashed Kubrick and King fan and has gone to great pains to capture the themes, mood and tone of both artists and their seminal works.

It is well known that King was not fond of Kubrick’s film.  In fact, he said he hated it.  Pretty strong words.  He thought it was too cold emotionally. 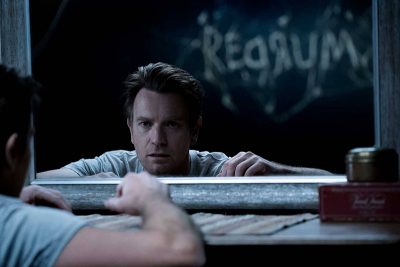 But he has gone on record as liking Flanagan’s adaptation that melds images, moments and emotions from the original film (not clips but astonishing recreations) into the continuing story of Danny Torrance’s search for some semblance of peace forty years after the trauma of the horrifying events he was subjected to, and permanently scarred by, as a child at the Overlook Hotel. 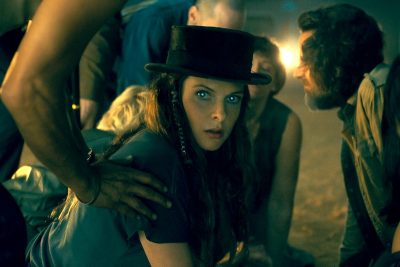 The adult Dan’s encounter with Abra, a brave teen with her own potent ESP (the “shine”), who seeks his help against a merciless adversary known as “Rose the Hat” – a terrific Rebecca Ferguson – foreshadows a looming and brutal life-or-death battle.  But when Dan calls on his own powers to help Abra and her followers, he must face his own fears as he awakens the ghosts of his past.

This good-looking movie has a deliciously slow but steady build; some very good jolts and a tremendously satisfying pay off.  Recommended. 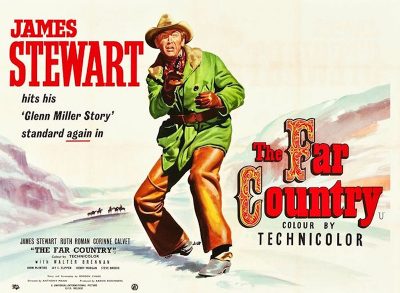 An archetypal example of its genre, this beautiful film is one of five superb westerns James Stewart made with highly regarded director Anthony Mann (this was Mann’s final film).

The story is about Jeff Webster (Stewart) and his sidekick Ben Tatum (Walter Brennan), two stoic adventurers driving cattle to market from Wyoming to Canada who come to loggerheads with a corrupt judge (John McIntire) and his henchmen.  Ruth Roman plays a sultry saloonkeeper who falls for Stewart’s character and teams up with him to take on the errant lawman. 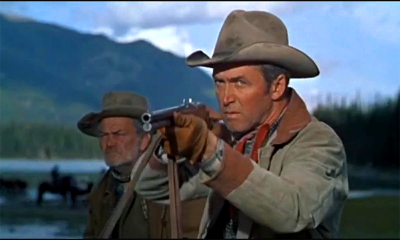 This epic saga set during heady times of the Klondike Gold Rush captures the stunning visual grandeur of northern Canada’s icy glaciers and snow-swept mountain in vivid Technicolor.  Mann’s insightful direction expertly steers the film to an unorthodox and unexpected, yet thrilling gun-blazing finale on the imposing, impassive landscape.

This two disc set, both new4K restorations from original film elements (disc one is in the alternate original aspect ratio of 1.85:1 and disc two is 2.00:1).  Both discs are loaded with extras, featurettes, a feature length documentary, a fascinating commentary, a limited edition booklet and a reversible sleeve with newly commissioned artwork by Graham Humphreys.  ARROW FILMS.  For more info: MVDb2b.com