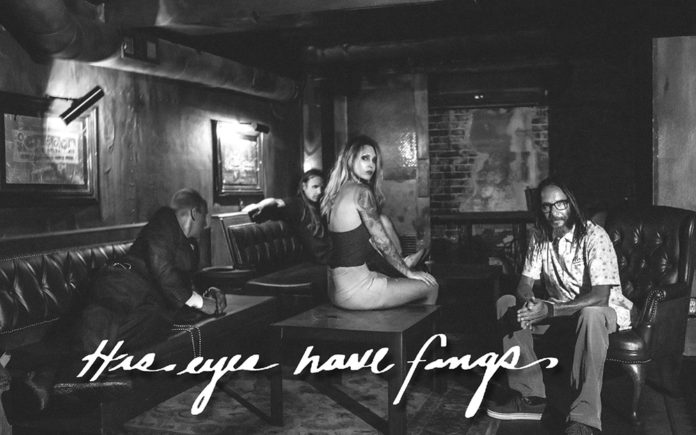 The El Gato classic is coming up this weekend.  Along with artist, Robert Vargas, photographer, KC Armstrong’s book release for Back In The Day, and obviously all the legends of bowl and vert skating, there will be an amazing concert.  The concert will be held at The Hard Rock Hotel in Palm Springs on Saturday, January 27 at 8pm.  The bands who will perform are skateboarder Allen Losi’s One Less Zero, and His Eyes Have Fangs.

His Eyes Have Fangs is an L.A. based psych band formed in 2013.  The band features Rachel Anne Rainwater on vocals, Vulcho Bonev on guitar, Matthew Rainwater on drums, and Tony Alva on bass.  Yes skate fans, that Tony Alva.  Tony is mostly known as a founding member of The “Z-Boys” and escorting in the modern era of skateboarding with his Frontside air.  Possibly the most well-known photo capturing any skateboarder is of Tony Alva performing the Frontside air.  Tony took time out of his hectic schedule to tell us a bit more about himself and his band.

Coachella Valley Weekly:  How did skateboarding become a part of your life?

Tony Alva:  “Surfing got me into skateboarding.  I grew up in Santa Monica.  Skateboarding and surfing goes hand and hand.  It’s like cross training.  When we weren’t surfing, we were skateboarding.”

CVW:  Who was the crazy one who decided skating in empty pools was a good idea?

Alva:  “As a group, we started gravitating towards that because we were running into guys from the 60’s who said they had done that.  Obviously in the 70’s, there was an era of empty pools because of the water shortage.  Also, I think it was a financial thing.  A lot of people had empty pools in the yards, especially on the north side of town where all the bigger residences were.  We started looking over fences to find something to skate in.  After trying it a couple of times, we were looking for bigger and better pools.  It spread from there.  At that time I was just starting to become a professional skater.  I wanted to push the envelope with skating pools.”

CVW:  You’ve been credited with ushering in the modern era of skateboarding with the Frontside Air.  How did that come about?

Alva:  “That was caught on film actually.  It had never been done before.  That brought a lot of attention to my group, the Dogtown guys.  But it also brought attention to me.  It was like I was revolutionary in skateboarding.  I was a guy who was pushing it to a new level.  It was pretty cool.”

CVW:  You’ve been going strong for 40 years.  How has skateboarding changed for you, and what keeps you going?

Alva:  “It’s changed a lot technically, but at the same time, it’s just as fun as it ever was.  The best part is the terrain.  There’s so much more stuff to ride now than there ever was.  It’s really cool because there are so many different generations of people skating together too.  At the park, there are kids and old school dudes who are grandpa’s now, taking their grandkids to the park.  There’s always the crusty old dudes skating the bowl and young kids who are into street skating.  It’s really exciting nowadays to be a skateboarder.”

CVW:  What is your connection with the El Gato Classic?

Alva:  “Eddie is a really good friend of mine.  They call him El Gato because he basically is always landing on his feet.  And that’s not just as a skateboarder.  He’s an amazing human being.  He’s constantly being of service to other people.  He’s a spiritual man.  He’s an amazing representative of skateboarding, and I wanted to be involved with it because Eddie’s the man.  Being associated with this is being directly associated with Eddie and his wife.  I stand behind what Eddie stands for.  He stands for good living and being forthright.  We’re really excited to be coming out there to be a part of this.”

CVW:  How did His Eyes Have Fangs start? 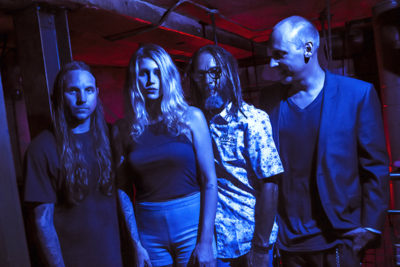 Alva:  “The band started as an instrumental trio.  It was Ray Barbie on guitar, Matt Rainwater drumming, and me on bass.  Ray had other projects going on and couldn’t put 100% into the group, so we got the guitarist who’s now in the group, Vulcho.  He’s a really eclectic dude and multi-talented musician.  He plays guitar and has a lot of surf influence.  But, you know, he kind of adds that psychedelia, experimental tones to the songs.  We wanted to get a singer, but we didn’t want a male vocalist, so we tried Matt’s wife out.  We did a little audition with her 3 or 4 years ago, and she fit into the band just perfect.  Since then, Rachel Anne has been writing songs with us.”

CVW:  What are you listening to right now which may surprise everyone?

Alva:  “I listen to a lot of Jazz.  I listen to a lot of Eastern music from India.  I listen to reggae and timeless rock like Beatles and Stones.  His Eyes Have Fangs is heavily influenced by a lot of that old psychedelic rock like the Stones, Jefferson Airplane, Buffalo Springfield… all that kind of stuff.  We incorporate a bunch of that into our sound, but a lot of our sound is kind of edgy.  There’s also a lot of blues undertones.  We’re really excited whenever we play live.  We get to share the music with other people.”

CVW:  Where can we listen to His Eyes Have Fangs and buy some merch?

Alva:  “Our website, hiseyeshavefangs.com has links to everything.  Really, we do it because we love it, but we do have merch.  Come out to the gig on Saturday.  That’s how you can listen to us and buy merch!”

William Sharp “Back in the Day” Book Release

With the recent release of William Sharp’s book “Back In The Day” which features hundreds of Sharps astounding photos from this early pioneering era of skateboarding.

Sharp will be displaying unseen photos that did not make the cut in the book, which the majority of these photos have never been seen before. You are not going to want to miss this.  Books will be available for purchase.

Born and raised in Los Angeles, Robert Vargas has played a central role in the shaping of the revitalized DTLA art scene thanks to his omnipresence on the streets, where people line up to see his infamous drawing sessions.

Vargas has ventured out on his largest mural yet and can be seen working on the corner of Fifth and Hill Streets in LA on “Angelus,” which will be the largest mural in the world created by a single artist, according to Vargas.

Vargas will be displaying for the first time in one place his collection of legends portraits.

Armstrong is a Sports, Entertainment and Advertising photographer working out of Los Angeles and Toronto. He has produced award winning imagery for such brands as Canada Goose, Adidas, Hockey Night In Canada, ESPN, and more. He creates stylized images of athletes and celebrities for advertising and editorial clients. He will be displaying portraits of legends that he has photographed over the last few years.

The Generations Flow Bowl Skateboard Contest will feature the top Amateurs, Girls, Pros and Legends in the industry today.

The Zero brings a fresh flavor to the music scene, with the beautiful and talented Sara Wright on vocals, legendary skateboarder Allen Losi on guitar, world renowned veteran tattoo artist Mike Spasbo on drums, the gifted stylings of Fender employee Luis Agulair on guitar and the back bone of many bands-master of all music Allen Buglione on bass. With their “we’re here to skate the session” attitude and Sara Wright’s natural charisma, the fun never stops!

His Eyes Have Fangs

Tickets are on sale now at www.elgatoclassic.com