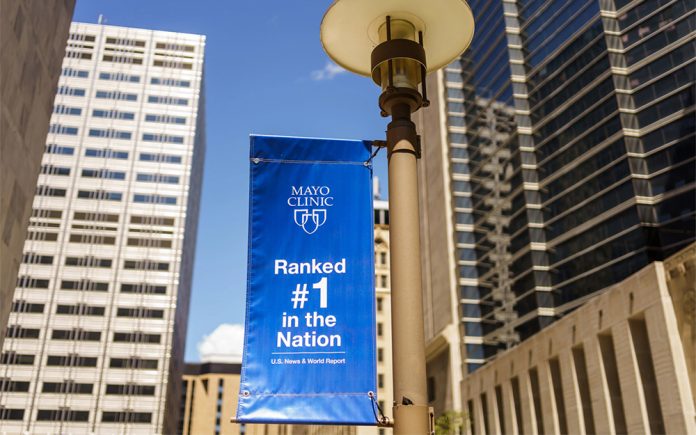 U.S. News recently released its annual list of the best hospitals in the United States.

At the top of this prestigious list is The Mayo Clinic in Rochester.  With fifty-seven research centers, the hospital does research work on diseases like Alzheimer’s and multiple sclerosis.  Sports medicine, diabetes and specialty surgeries are amongst the treatment areas where the Mayo Clinic ranks amongst the best.  Due to its research efforts, the Mayo Clinic leads hundreds of clinical trials each year.

Second on the list is the Cleveland Clinic.  Amongst the outstanding achievements of this hospital system, there are 107 accredited residency training programs.  This hospital sees more heart cases than any other in the United States.  Prior to the pandemic, this hospital performed roughly 700 transplants each year. Larynx replacement surgery is one of the many innovations of this hospital.

The UCLA Medical Center is third with one of the best trauma centers in the nation.  This training hospital also has some of the best geriatric and children’s programs.

Fifth is the hospital that interrupted the John Hopkins twenty-year streak atop these hospital rankings.  Located in Boston, it is Massachusetts General.  Initially started as part of Harvard University in 1811, Mass General is best known for their work in cancer, fertility, geriatrics and digestive disorders.  This hospital has one of the best funded research programs in the world.

Cedar-Sinai Medical Center is sixth on the list this year, down from second.  This hospital regularly ranks amongst the top research hospitals in the United States with work in stem cell biology, genetics and numerous other areas like Artificial Intelligence, Cardiac Arrest Prevention and Women’s Health issues. In addition to some of the best healthcare in the United States, Cedars-Sinai also has one of the best art collection of any hospital in America.  Some of the works you may find on their walls include Andy Warhol, Picasso, Rauschenberg and Sam Francis.

In ninth is UCSF Medical Center in San Francisco with Northwestern Memorial Hospital in Chicago rounding out the top ten.  Other west coast hospitals in the top twenty include Stanford Hospital up north and the Mayo Clinic – Phoenix in fifteenth.

Locally, Eisenhower Medical Center ranks second in Riverside County and twenty-first in the state. Eisenhower is rated as a ‘high performer’ in areas including the heart, COPD, colon cancer, hip and knew replacements, orthopedics and lung cancer.

Loma Linda University Medical Center is the top-rated hospital in the county and 13th across the state.  Best known for their proton therapy treatments for cancers including lung, brain and prostate.  As a teaching hospital, students specialize in areas like behavioral health, nursing, dentistry and pharmacy.

According to HospitalSafetyGrade.org, the safest hospital in the Coachella Valley is Eisenhower with an A grade.  Desert Regional gets an above average B while JFK gets a C score.  High Desert Medical in Joshua Tree also gets a C score while San Gorgonio in Banning and Hemet Global get D scores.