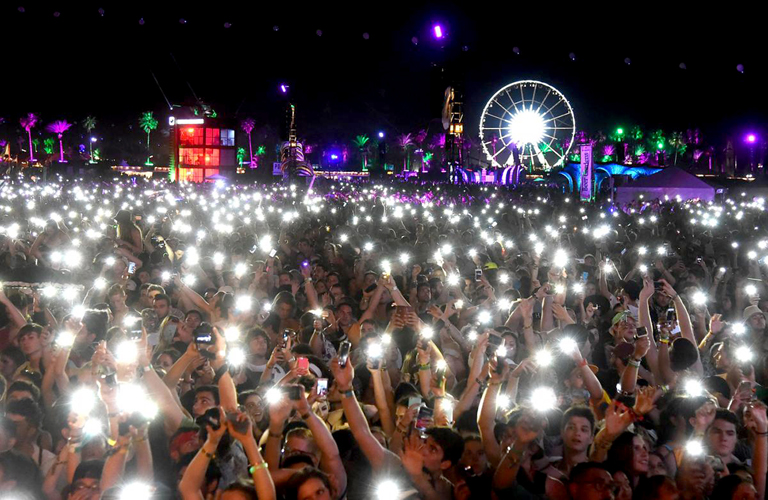 “I’m all over the place with my musical interests, so Coachella is a rad way to see/experience my iPod shuffle live!” – Katie Cathcart, of the award winning local band, Bridger.

Every year I walk onto the Empire Polo grounds transformed for the musical experience of the year, I can almost hear Rod Sterling narrating: “You’re traveling through another dimension — a dimension not only of sight and sound but of mind. A journey into a wondrous land whose boundaries are that of imagination. That’s a signpost up ahead: your next stop”… the “2016 Coachella Valley Music and Art Festival” followed by the one that says, “No food or beverage beyond this point.” According to CBS 2, Chief Meteorologist, Patrick Evans, this year’s attendees are expected to enjoy a gentler, milder weekend than the traditional sand pelting wind storms and record setting heat blasts that have spilled beers and ruined nachos while making national headlines. “Coachella always brings hot acts and some hot weather too! This weekend, I expect temperatures to top out in the mid-and-upper 80s, with lows down around 65.  It might be a little gusty on Friday, but not the rest of the weekend. It will be great for festival goers, unless you’re standing next to the ones that don’t have access to showers!” (Thank you Patrick)

I’m not going to lie.  The list of acts is long and intimidating, even to someone who prides themselves in keeping up with the music scene, local and national.  Musical taste is subjective and can vary with age.  This year, to be fair, I’ve enlisted some help – a lot of help. I went to our local experts – our local original rock musicians who have dedicated themselves to their craft, have marinated themselves in the music that inspires them, and therefore have incredible scrutiny.  The list of “must see bands” comes from music entrepreneurs ages 13 to 50, and yes, there is music for pretty much everybody at this year’s festival, as has become standard.

First up, Jake Sonderman, a 13 year old Academy of Music Performance (AMP) graduate.  Jake plays guitar for Minor Emergency and bass guitar for DTension who will be featured at Stagecoach this year.  “I prefer the more traditional bands over EDM.  My picks are Guns ‘N Roses, Cold War Kids, Of Monsters and Men, Silversun Pickups, and Matt and Kim. Guns ‘N Roses is for sure the top of that list!”

Ison Van Winkle, lead singer for the CV Music Award nominated band, YIP YOPS, chose this top five: “LCD Soundsystem: I chose them because James Murphy’s music has had a big influence on me, and I’m interested to see their return to the stage. Death Grips: Their music is really heavy, but also very inspiring to me. I’ve never heard anything like them, and they have a kick ass live show.   Kamasi Washington: I’ve heard so many good things about his take on jazz, and his band is supposed to have amazing musical synergy. Then there’s Savages: I’m interested in their post-punk, Lo-Fi music, and according to Ross (drummer of YIP YOPS), they’re awesome live.  Finally, Beach House: I’m really into their music right now.  I haven’t heard a bad song from them and am curious to see them live.”

James Johnson, lead vocalist for The Brosquitos (a band that has made it to the finals of the Tachevah 2016 Concert Tour), shared his top 5: “I couldn’t miss Foals, the 1975, Matt & Kim, Edward Sharp & the Magnetic Zeros, and M83! They are seriously some up-class acts.  I feel as if The 1975 is bringing back a bit of the Brit Invasion to America – something we’ve all been waiting for. Matt & Kim are just that upbeat duo that you would definitely dance to. Edward Sharp and his group are legends in creation for our generation, so that would definitely be a do-not-miss performance.”

Jim and Katie Cathcart chimed in at my request.  The brother and sister duo, in their early 30s and late 20s, respectively, have been making incredible music for a while and are repeat nominees in this year’s CV Music Awards for their band, Bridger.

Jim Cathcart: “My picks include Savages – their’s is one of the best records this year, in my opinion, and I hear they’re a total force live. Then there’s Gary Clark Jr. – how could you not want to see this guy play guitar? The punk showmen, the Vandals, were a big influence for us growing up.  We went to a lot of their shows. I’m really into the jazz trio, gogoPenguin – they’ve got good driving music and would be a set to catch when looking for a chill out moment. I caught the band, Run the Jewels, briefly before, and they sounded killer. You get a viciously good rap fix with this one.”  Katie Cathcart: The Vandals, LCD Sound System, Matt & Kim, Sufjan Stevens, and Miike Snow. I’m all over the place with my musical interests, so Coachella is a rad way to see/experience my iPod shuffle live!”

Dougie VanSant of alternative rock band, The Flusters, who are also CV Music Award nominees, offered his golden picks:  Run the Jewels, Autolux, LCD  Sound System, The Kills, and Major Lazer.  “These five acts have carved out their own corner in a chaotic atmosphere of inundated music and media.  These artists have been extremely influential to me, as well as countless other emerging and mainstream musicians. Every song writer should research their catalogues.”

Hive Minds (Derek Jordan Gregg, Sean Poe, Matt Styler) have made their music known to the Coachella Valley for over 3 years.  These CV Music Award nominees recommend Foals, Cold War Kids, Zella Day, Edward Sharpe + The Magnetic Zeros and Silversun Pickups.  “We feel that these bands are all honest music that put out music with substance, not just synthesized to make money and force fed to the consumer. These bands give me hope that you can still sell good records, go on tour, play festivals and live the dream with good material.”

Alex Antonio, whose original rock band, Hollace, has several CV Music Award nominations this year, gave us his picks in descending order: “(5) Gary Clark Jr. – Awesome blues/rock musician who was first introduced to me as the ‘next Jimi Hendrix.’ He is soulful and real.  His music speaks to the soul. (4) Mavis Staples has been a “staple” of music since the 60’s.  She sang with The Band, among others, and is a true living legend. (3) Rancid embodies the spirit of what punk rock is. I’ve seen them a handful of times and they never disappoint. (2) The Damned are true punk pioneers.  They had a hand in inventing the genre along with the Clash and the Ramones.  They are often imitated but never duplicated. (1) Guns n’ Roses – Because it’s Guns n F’n Roses! Enough said.

Dan Dillinger, award winning bassist, up for several CV Music Awards for his work in local original rock bands The Sweat Act and Bridger, gave his honest feelings about the lineup: “You know, I’m not too excited about the lineup for 2016. This year, along with the last couple (or even few), have not been nearly as great as past years. BUT! Among the handful that I wouldn’t mind seeing this year are the Vandals, Rancid, Ice Cube, Nathaniel Rateliff and the Night Sweats and Savages. Although I’ve seen a couple of them a few times (and they’ve never disappointed), I think these five would most definitely be my highlights. As for Nathaniel Rateliff – never before has a folk/soul/blues artist/group gotten me feeling so damn good. The dude and his posse are fan-f?!&ing-tastic.”

Brandon Ray Henderson, well-known local musician (The Pedestrians, Parocella) and local booking agent/promoter, has always been a go-to source for me when it comes to finding great new music, and he has never disappointed.  His top picks are Vandals, Silversun Pickups, FOALS, Rancid and Strangers You Know.

As for me, there are several young artists deserving of your time and attention, but there is one, for me, that has surprisingly not been mentioned yet: Chris Stapleton.  This soulful and prolific writer, whose songs have been recorded by many, emerged into his own on the stage of this year’s Country Music Awards alongside Justin Timberlake. Stapleton’s bluesy, genuine performance and break your heart vocals catapulted him into mainstream love and adoration. He is definitely a must see and will play both Coachella and Stagecoach.  My other picks among those listed above, are Nathaniel Rattlife and the Night Sweats, FOULS, Pete Yorn, Mavis Staples, Of Monsters and Men, The Kills, CHVRCHES, Gary Clark Jr., Cold War Kids, Vandals, The Front Bottoms,  and of course, Guns & Roses!