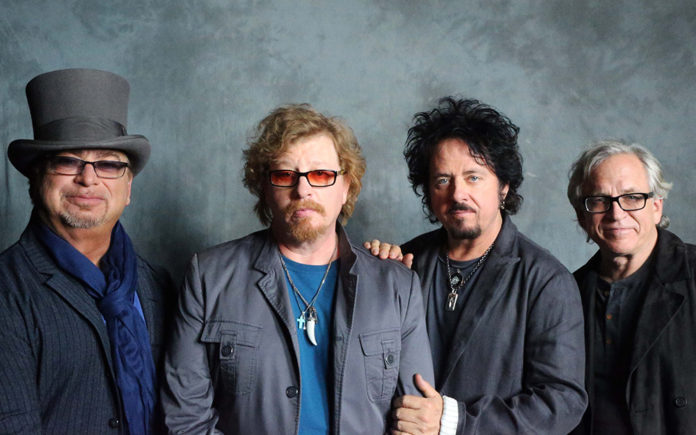 This year marks the 40th anniversary of Toto. In 1977 after working together as session musicians on several albums, David Paich and Jeff Porcaro decided it was time to form a band of their own. With their plan in place, they recruited David Hungate, Steve Lukather, Steve Porcaro, and Bobby Kimball to round out the band and help record their first album, 1978’s Toto. The album included their first hit, “Hold The Line,” which hit number 5 on the Billboard Hot 100. After the next two releases, Hydra (1979) and Turn Back (1981) failed to have the commercial success their label had expected, they were sort of put into a “do or die” situation with their next album. Sure not to disappoint, Toto recorded their fourth album, appropriately titled Toto IV. This album proved to be their most successful album. It included Toto’s most well-known singles, “Rosanna” (No. 2, Billboard Hot 100) and “Africa” (No.1, Billboard Top 100). The commercial success of Toto IV put Toto on the radar of director David Lynch. In 1984, Lynch recruited Toto to score the soundtrack to cult movie Dune.

Forty years later, and many lineup changes, Toto still enjoy the success of their amazing talent and chart topping songs. This tour, marking 40 years since their formation, is a co headlining tour with Pat Benatar & Neil Giraldo. Being a co headlining tour means they don’t get to play their stacked 2 hour set list, but fear not, the set list is still a power house. The lineup features original members Steve Lukather, Steve Porcaro, and David Paich. Toto are slated to play Fantasy Springs this coming Friday, September 1. David Paich was kind enough to talk with us about the history and future of Toto.

Coachella Valley Weekly: Can you tell me a bit about the music scene in L.A. during the late 70’s and the formation of Toto?

David Paich: “Obviously there’s a lot of session work going on there. Jeff Porcaro and myself hooked up in high school. We were not new to the session scene here because our fathers were in the business. We were playing gigs in local high schools. We had our sights set on making it big with our high school band and decided we needed some experience first. We jumped into the deep end with session work. My first session work was Diamond Girl by Seals and Crofts. My first record was my first hit record. Jeff got onto a Steely Dan record and we did a few of those together, so our names started making the rounds. We made a name for ourselves as well as gaining experience. It was great. I grew up watching the guys in The Wrecking Crew [do yourself a favor and watch the documentary] make records. It was a very magical and creative time as far as session work in those times.”

CVW: Did you get to work with The Wrecking Crew?!

David: “Yeah. I sure did. One of the first sessions I did was for Sonny Bono. My dad was the arranger. I got to work with Hal Blaine and Joe Osborn. It was fabulous. It was like sitting in a big musical hammock. It was great watching them play when I was younger and I always wanted to play with them. My first year in college in ’73 I wrote a hit record “Houston I’m Coming To See You” coincidentally for Glen Campbell who just passed and who is a great American treasure. I got to play with Hal, Joe, and Glen who was also a part of The Wrecking Crew. I was very fortunate and blessed to be in the middle of that. There were no schools for that like there are now.”

CVW: 1982 saw the release of Toto IV. How did the guys find time to record and tour for that album and do session work for Michael Jackson’s Thriller? 1982 had to be very fulfilling.

David: “Here’s the thing. Just because albums take forever to record, it doesn’t mean session musicians take forever. We go in and out. We come in for a day and cut two or three things and then leave. Or they’ll hire us for one day during the week. So maybe we come in for a Thriller session on a Monday and record our album the next day. But Toto IV was recorded before Thriller. We took turns. We had time. If overdubs were being done, some of us could take on session work. There was always ample time to do things for other people. Of course when Toto IV broke out, we knew it would be lasting, and we’d have to focus on Toto. It was a ‘do or die’ situation with Sony. They were kind of, ‘let’s see if you guys can still do hit records here.’ Everybody thought we were a one hit wonder with “Hold The Line.” We had a chance to redeem ourselves. We didn’t really tour that much right after Toto IV. We had a little bit of time and took on a score for Dune during that period also. It’s fascinating to look back on it now and see how busy we really were back then. It was 7 days a week you know?”

CVW: How did the opportunity to score Dune come about, and did you enjoy scoring a movie as a band?

David: “We did. It’s interesting. I was raised around composers and arrangers. Jeff Porcaro’s dad played on a whole bunch of movies. I think after Toto IV our name got thrown into a stable. Somebody said Ridley Scott was originally going to do Dune and wanted to submit something for that. We were very excited about it. We thought the director of Alien was going to do it. Then we found out he bailed and David Lynch was going to do it. We figured we’d try to do it anyway. He had a big hit with Elephant Man and we were fans. I wrote what I thought would be a good theme – which ended up being the theme. I flew down to Mexico and played it for Raffaella de Laurentiis, Dino’s daughter, and David Lynch. I hit play during the Dino de Laurentiis presents and the music played with the desert scene and it kinda wowed them. We thought it would be a challenge for us. I sat down with David Lynch and worked on some of the cues and Jeff and his father did some of the other cues which would be on the symphonic arrangement. We may revive that and do snipers for our 40th anniversary tour coming up next year.”

CVW: Dune is my favorite piece of work by Toto.

David: “Is it really? We were just talking about this. Billy Idol came up to me in an airport. I said, ‘Hey Billy…how good to see you again.’ He goes, ‘Oh Toto. My favorite album is the Dune album.’ I cracked up because for some people, that’s their cup of tea. I can see why. If I was following a band, and all of a sudden they took a left turn and did something like this, I think it would make me smile as well. It was very interesting. I thought David would want it sorta like John Williams, but he wanted it super low and slow and dark. It had a 40 piece choir. I think it was one of the first scores like that. It took us by surprise. We worked with him very closely. We’re still good friends with him. I’m glad that you like it.”

CVW: I know it’s not what you guys are know most for, but for me it really struck a chord. I love soundtracks and scores. What type of music are you listening to most right now?

David: “I’m actually listening to a lot of soundtracks right now… a lot of Jerry Goldsmith and John Williams. I’m constantly a student of what they’re doing. I’m trying to learn and dissect it. As far as bands, I like Snarky Puppy and their sax player Chris Bullock . There are plenty of great up and coming musicians who are sizzling right now. This guy named Jacob Coolier who Quincy Jones is managing. He’s kinda a young Stevie Wonder. I like Bruno Mars a lot. He has Michael Jackson’s energy. I like Adele too. There’s a lot going on right now.”

CVW: Going back to the ‘do or die’ situation with Sony, are you a fan of how music is made and shared now vs. the times of major labels?

David: “I have mixed feelings about it. I like that there is so much music to give, but things have gotten a bit out of balance. It’s on its way to something good, but the song writers are suffering. People make music and it’s being given away for free. But, that makes everybody try harder, and find new things to do. People are jumping out there with live music and are trying to find venues to share their music. Like us, you have to actually show that you can play music. It’s not just made on a computer and in the studio. Live music shows that people actually have talent. I like file sharing, but it needs to be tipped back a bit towards the artists.”

CVW: Are there are any special surprises in store for us next year to mark the 40th anniversary of the debut album?

David: “I think there are a bunch of cuts from albums we’ve never or rarely played live that we want to revise and refresh. I think we may do some more acoustic stuff. We want to change it up on stage visually. We have a new bass player and sax player who are incredible singers, so it’ll be little more muscular. Everybody is at the top of their game right now. We can finally get together and say, ‘hey, we’ve never played this before. Let’s try it out.’ I’ think the crowd is in for some good music and they will see Toto at its best. We’re having a bit of a resurgence here in America. Europe and Japan have always been strong, but Seth McFarland is going to have the song “Africa” in Family Guy again. I think he’s going to animate us. We love laughing at ourselves.”