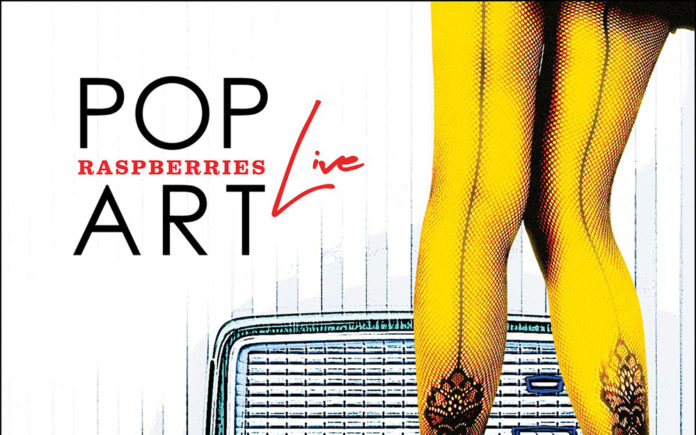 If you want to make a perfect pie or cake, all you need is a recipe and the right ingredients. Follow the instructions and voila. That’s basically all it takes. Creating the perfect song is a trickier proposition.

You certainly know a perfect song when you hear it. It’s difficult to quantify why, to break down the details, you just know. Todd Rundgren’s “I Saw The Light,” the Jackson Five’s “I Want You Back,” those are perfect songs. More recent examples include “No Rain” from Blind Melon, “Hey Ya” from Outkast, “Single Ladies” from Beyonce and “Happy” from Pharrell Williams. Undoubtedly the most perennially, all-time pluperfect song ever is “Go All The Way” by the Raspberries. This is a fact, and it’s not up for debate.

The Raspberries originated in Cleveland, Ohio in 1970. They rose from the ashes of two popular local bands, the Cyrus Erie and the Choir. Eric Carmen was lead vocalist for Cyrus Erie, which had a huge live following. Guitarist Wally Bryson, drummer Jim Bonfanti and bassist Dave Smalley anchored the sound of the Choir, which actually accrued a few hit singles on local radio. Very briefly, Eric even persuaded Wally to join the Cyrus Erie too.

In 1970 Eric, Wally and Jim recruited John Aleksic for bass duties, (Dave Smalley was serving in Vietnam). John played with the nascent four-piece until Dave returned. At that point, Eric shifted from rhythm guitar to bass and Dave took up rhythm guitar. Although Eric the nominal lead singer, Wally and Dave also took turns fronting the band.

They spent considerable time woodshedding and playing local clubs. Their demo caught the ear of producer Jimmy Ienner and after an intense bidding war the Raspberries were signed to Capitol Records. Their music drew on the seminal sounds of British Invasion bands, especially the Beatles and the Who.

Their self-titled debut arrived in the Spring of 1972 and included a scratch n’ sniff sticker that actually smelled like raspberries. (Ahh, the ‘70s!) The album peaked at #51 on the Billboard chart, but the Second single, “Go All The Way” managed to climb to #5 on the singles chart. A remarkable feat, for an unknown mid-western band.

For the next three albums, the band refined their sound. Sticking to the style Pete Townshend referred to as “Power Pop,” catchy and wildly melodic, it was accented by crunchy guitars and thundering drums. Not six months after their debut, the follow-up, Fresh, arrived. But by the time their third album, Side 3 was recorded in late 1973, inter-band tensions fueled a more raw and aggressive sound.

Tensions soon escalated and Dave Smalley was booted from the band. Not long after Jim Bonfanti quit and bassist Scott McCarl and ex-Cyrus Erie drummer Michael McBride stepped in for what would be the Raspberries’ fourth and final album, 1974’s Starting Over. Although it wasn’t as popular as its predecessors, the album had some high-profile fans like John Lennon and Bruce Springsteen.

Not long after, the band called it quits. Eric Carmen went on to have a moderately successful solo career, writing and singing the lachrymose ballad “All By Myself,” (which he took to #2 on the charts and was later made even more lugubrious by Celine Dion), as well as the song “Hungry Eyes” from the Dirty Dancing soundtrack. He also wrote the douche-tastic Ann Wilson-Mike Reno duet, “Almost Paradise,” which was featured on the Footloose soundtrack.

Jim Bonfanti and Dave Smalley formed their own short-lived band, Dynamite. Wally Bryson resurfaced in Tattoo and then joined Fotomaker for three albums in the late ‘70s.

Fast forward to 30 years after the Raspberries’ break up and the impossible happened. After years of rumors and stalled reconciliations, the Carmen/Bryson/Bonfanti/Smalley line-up reconvened. Coincidently, House Of Blues was opening a club in the band’s home town, Cleveland. It seemed like the perfect place for a reunion concert.

The show went so well, a nationwide tour followed, along with a VH1 special and Capitol Records even issued a new Greatest Hits compilation. Now the fine folks at Omnivore Recordings have released Pop Art Live, that legendary Cleveland concert in its entirety for the very first time.

The album crashes through the speakers with the classic track “I Wanna Be With You.” A fusillade of drums and ringing guitar cushion Eric’s yearning tenor as he is joined by the remarkably tight harmonies of Wally, Dave and Jim. The packed audience roars with delight as the song limns the limits of teenage sexual frustration.

Each of the band’s four albums is represented on this two-disc set, but the lion’s share of songs come from the second record, Fresh, and the third, Side 3. Released six months after their debut, Fresh confirmed that these Cleveland kids were more than one-hit-wonders. Wally Bryson takes the lead on “Nobody Knows,” and “Might As Well.” The former is a gritty treatise on teenage alienation and unrequited love featuring rippling guitar riffs. The latter blends mandolin and banjo accents that are crisp and countrified. Portraying a beleaguered commitment-phobe, Wally offers mock exasperation as he admits his feelings; “might as well give in and say I love you.”

Meanwhile, “Let’s Pretend” pivots from tender to angsty to melodramatic. Eric’s falsetto vocals are as sharp and crystalline as they were 32 years earlier. “It Seemed So Easy” frames a break up post-mortem in a Merseybeat melody that echoes British antecedents like the Hollies and the Kinks. Jangly acoustic guitars and beatific high harmonies nearly belie the slightly masochistic groveling of “If You Change Your Mind”

Side 3 songs include the candy-coated crunch of “Tonight.” On “Last Dance” the arrangement opens with ringing, Byrdsy guitar before downshifting into a rollicking Hee-Haw hoedown. Dave Smalley handles lead vocals on two of his compositions, the rock solid groove of “Makin’ It Easy” and the prickly “Hard To Get Over A Heartbreak.”

Although “Ecstasy” and “I’m A Rocker” are ostensibly Eric Carmen’s songs, they both showcase the titanic talent of drummer Jim Bonfanti. “Ecstasy” crackles with authority as Jim pounds his kit with a Keith Moon-like abandon. That said, his percussive assault never overpowers the winsome melody. A whip-crack rhythm drives the action on “…Rocker,” as Eric insists “Back beat boogie got a hold on me, make me wanna jump and shout.”

Playing a two and a half hour concert on their home turf allowed the band to spread their wings creatively and honor musical heroes as well as their humble beginnings. Three Beatles tracks pop up, the see-saw, sad sack waltz of “Baby’s In Black,” the rippling samba of “No Reply,” and the ringing Rickenbacker riffs and

jagged off-kilter rhythms of “Ticket To Ride.” The third song of the first set is a note perfect rendition of the Who’s “Can’t Explain.” A three chord stomp, it features phased guitars and a pile-driver beat.

They even manage to excavate a triad of songs from the late ‘60s Choir era. “When You’re With Me is lush and yearning, echoing both the Beach Boys and Chad And Jeremy. “It’s Cold Outside” is almost too perfect and polished for Garage Rock, and the mid-tempo “Should I Wait” simply shimmers.

Even though Dave and Jim weren’t on board for the Starting Over record they acquit themselves beautifully on the title track, “Play On,” “Party’s Over,” and “Overnight Sensation.” “Starting Over” is a majestic, piano-driven ballad that has as much gravitas as any early ‘70s Elton John song.

Wally handles lead vocals on the sinewy “Play On,” (which he dedicates to bassist Scott McCarl), the tune blends a driving rhythm and walking bass lines with a lush chorus and wicked guitar work. He also nails the Psychedelic Soul of “The Party’s Over.” Muscular guitar licks wash over tinkly piano, serpentine bass fills and thwoking percussion.

“Overnight Sensation (Hit Record)” is the Raspberries’ magnum opus, matching the sonic ambitions of Phil Spector and Brian Wilson. It loses none of its grandeur live. Ethereal piano chords cascade over spiky guitar, rippling castanets and a walloping backbeat.

A precis on the vagaries of Rock N Roll songcraft, its equal parts wide-eyed and cynical. Eric insists he’s not “in it for the money,” but confides “I’ve been trying to write the lyric, not offensive but satiric too.” Pretty soon the monster hook kicks into overdrive and Bonfanti unleashes a tsunami of crashing percussion as celestial harmonies chant “hit record yeah, want a hit record yeah, (number one).”

Although the debut is allotted only five cuts, they’re all potent entries. “Don’t Wanna Say Goodbye” shapeshifts from a lachrymose piano ballad, quickly building to a crescendo before the instrumentation retreats and then roars back for a bluesy climax. The song closes with a spitfire guitar solo. “I Can’t Remember” feels as Cinematic as a Rock Opera overture. “I Saw The Light” ping-pongs between choir-boy sweet and yowly sourness. “Come Around And See Me” fuses Latin percussion to a twangy Country Rock song.

27 songs in, the band wraps it up with their ne plus ultra hit, “Go All The Way.” The distorto opening riffs still growl with authority, boomerang bass and pummeling backbeat feel equally thrilling. Eric’s vocals crackle with intensity as he revels in that magic moment of concupiscence. What seemed sexually suggestive in ’72, (the BBC banned the tune because of risqué lyrics), seems rather sweet and innocent in retrospect.

Amazingly, the song still resonates, which is why it shot back into the Top 10 when it was featured in the 2014 movie, Guardians Of The Galaxy. Here it serves as a victory lap for a band whose musical prowess will never go out of style.

To replicate the sounds the Raspberries created in the studio all those years ago, on stage, the four-piece enlisted a quartet of musicians they christened The Overdubs. Paul Sidoti added guitar, keyboards and vocals, Billy Sullivan provided more guitar, harmonica and vocals, Jennifer Lee also played keys and sang back-up and Derek Braunschweiger supplied additional percussion.

This live set gives the Raspberries their final moment in the sun. On stage, the band struts and swaggers, but they also display a level of hometown humility that is shot through with sincerity and grace.

The album provides an excellent introduction for millennials who got hooked via Guardians Of The Galaxy. (In fact, a three-record vinyl set of Pop Art Live will be released on Black Friday-Record Store Day in November). For anyone who came of age in the late ‘60s and early ‘70s, weaned on the golden age of AM Pop radio, the record is a potent reminder that the Raspberries had the goods. In fact, they still do.