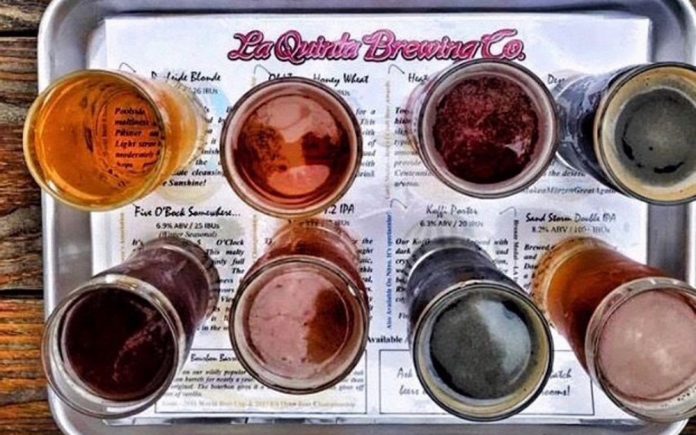 Time to pick up where we left off; touring the local Tasting Rooms! We will begin with La Quinta Brewing this week and continue from there. Let’s head out to the brewery on Wildcat in Palm Desert together and I’ll describe my approach as if it were my very first visit to this location.

Upon entering, we saunter up to the vast chalk board which lists a myriad of beer styles and size options. The beer board is organized with Core Beers (year-round) on top, followed by their Taproom Series (limited edition) beers listed below. Down a bit further, we see that Flights (small five-ounce pours) are available. 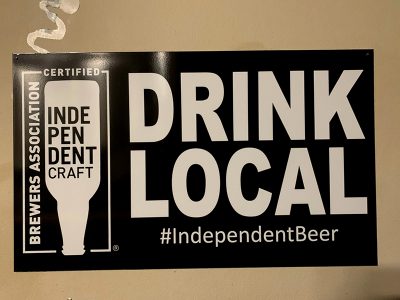 On any first trip, I generally opt for sampling several small pours of different beers in an effort to get a handle on what the makeup of the brewery is all about; so, in our case, it’s Flight time. We get to choose any four Core Beers, so it is now it is time to decide what should be ordered. I like to spread my initial offering among as many different styles as possible, generally tasting from least bitter and finishing with the most bitter, generally an IPA.

There are two very light offerings; Poolside Blonde Ale and Una Mas, a Mexican Lager. Poolside is my choice as the purple asterisk denotes it as a medal winner. Note that which medal the beer has won isn’t defined, but it’s as good a reason as any in making a selection. I like starting with the lightest offering from a brewery since lighter beers are the most difficult to make; there are no extra hops of fruit flavorings added which can mask off-flavors or other flaws in the beer. 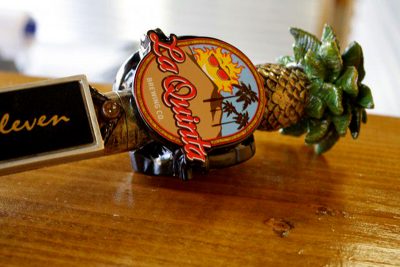 Second choice is Heatwave Amber Ale, a malt-forward style akin to an American Red. Ambers are not readily available at retail in cans or bottles, so this is a brew I’m looking forward to sampling. The fact that this beer has also won a medal of some sort in a bonafide competition makes its selection even more appealing.

Our third selection is another medal-winner, Even Par 7.2. The fact that even par on a golf course is 72 and the alcohol content is 7.2% ABV (alcohol by volume) is a little piece of marketing genius. By selecting a palate-challenging hoppy IPA third in rotation, we may then refresh our fatigued palate with another malty selection in the next round.

Last and certainly not least my choice is Koffi Porter on Nitro. The nitro pour, akin to Guinness Draught, utilizes a nitrogen blend to push the beer as opposed to the standard carbon dioxide gas. Since nitrogen bubbles are larger and more dense than carbon dioxide, the result is a smooth, creamy glass that is softer and more rounded on the palate. Using Koffi, a well-known local roaster is a nice piece of cross-marketing as well. 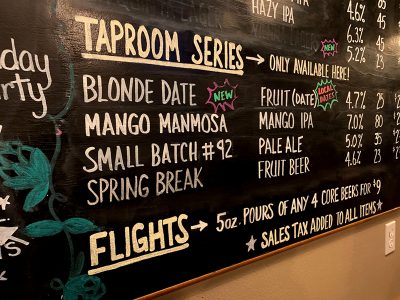 So, there we have it, the first flight has been selected and poured. All that remains is to find a seat and begin tasting our smorgasbord of beer in an effort to determine which we like best. If you are unsure of how you would like to assemble your flight and/or are unsure of the tasting order, always defer to the beertender for answers to these questions as they are specifically trained to provide guidance in situations such as these.

When tasting your flight, keep in mind that you do not have to finish each beer on your tray or tasting paddle. Should you encounter a flavor which just doesn’t sit well with you, it is absolutely appropriate to leave a glass unfinished. This is another benefit of small-taste flights; waste is negligible should you encounter a beer which doesn’t exactly agree with you. In addition, you do not need to finish each glass in consecutive order. It is perfectly normal to skip ahead and return to a beer at a later time. Malt-forward beers such as Ambers and Porters (and Stouts) will often change in flavor and intensity as they warm up. It is not unusual for a room temperature Porter to appear completely different than it did when it was served to you ice-cold. 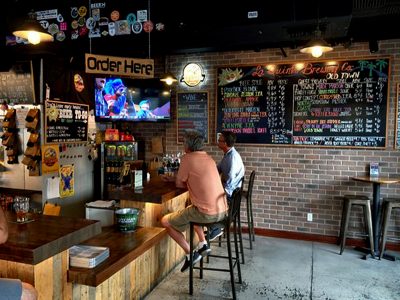 Once you are finished with your flight, it is decision time again and you have two options. The first is to order a full-sized offering of one of your flight favorites, allowing you more time to socialize while spending less time in the evaluation phase. The other option is to head back in and assemble another flight. Here at La Quinta, this is made slightly more difficult in that there are only seven Core Beers. While the brewery is hoping that you simply repeat one of their Core Beers, it has been my experience that if you politely protest to repeating a beer, the guide will allow you to substitute one of their Limited Edition selections…no harm, no foul. After all, it is in their best interest to keep you happy and to allow you to sample as many different beers as possible.

That wraps up the tasting portion of the visit, but by no means are you completely finished. Most Tasting rooms have copious amounts of brewery paraphernalia available, and La Quinta Brewing is no exception. Clothing such as shirts and hats are most certainly available. So are eclectic items, such as bottle openers, pint glasses, metal signs for your beer cave, and even golf balls. Heck, you can even score one of their iconic palm tree topped tap handles for you kegerator at home should you need one.

Armed with a plan, drop on by with friends and impress them with your newfound Tasting Room skills!

(When Ed Heethuis isn’t brewing at Spotlight 29 Casino for 29 Brews, you will find the Certified Cicerone® / Brewmaster out on his road bike, attempting to cross-breed his native desert tortoises with the African Spurred variety, or talking beer with the patrons at Taproom 29. He may be reached at: heethuis.ed@gmail.com or wherever beer may be found in the wild.)