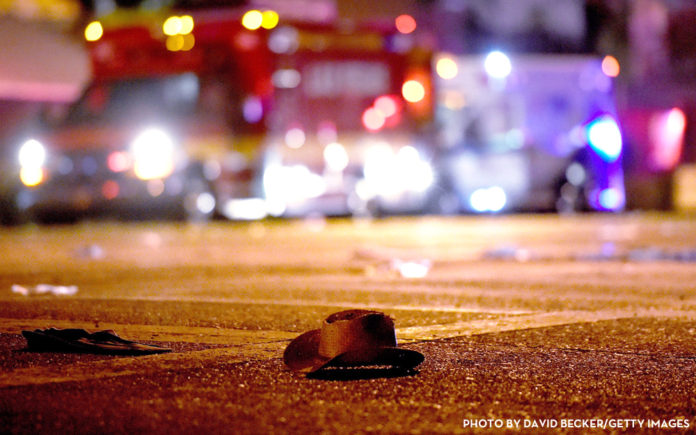 Photos flashed on cell phones of friends and family members sharing their joy with loved ones at Route 91 Harvest Music Festival in Las Vegas, NV on Sunday October 1, 2017. Moments later a hailstorm of bullets cut through 22,000 music fans and the life force of at least 59 people- fathers, sons, mothers, daughters, aunts, uncles, grandparents, boyfriends, girlfriends, teachers, military, students, tourists, police officers, neighbors and people poised to celebrate music. Over 525 more people were shot and injured during the most horrific mass shooting in U.S. history (unless we consider Wounded Knee).

At around 10:08 PM, on Sunday, gunfire interrupted Jason Aldean’s concert. Reports indicate the gunfire may have lasted for up to 11 minutes (initial reports said shots were fired for 72 minutes) and then at 11:20 PM Las Vegas SWAT breached room 32135 at Mandalay Bay Hotel and found Stephen Paddock dead, according to Las Vegas law enforcement. However, according to facebook video and several accounts from eyewitnesses, shots were also being fired from the 4th floor of the hotel. As the story unfolds more questions than answers arise. How does a 64 year old multi-millionaire, a retired accountant, former defense contractor and real estate investor secure all the weapons and ammunition to kill so many innocent people? How does he bring all this luggage into the hotel without any questions? Why does he want to kill and hurt so many people? At this point, there are still many unknowns and conflicting accounts circulating on the ground in Vegas and online from personal accounts and alternative sources as well as major news outlets.

What is known is many people lost loved ones in this tragic, horrifying attack on innocent lives. Nothing can bring them back. Nothing can remove the pain. Children lost moms and dads, husbands lost wives, wives lost husbands, friends died. Over 500 others have been wounded and injured and the National psyche has taken another hit as we wrestle with why these attacks continue to happen. Our thoughts and prayers may bring a little comfort but a deeper investigation must take place. This lone gunman theory coincides with the upcoming release of the JFK files from the National Archives, which has been kept from the public and the source of many conspiracy theories as a result. Soon, it will be up to the President to decide to disclose or block the remaining files on the JFK matter. Emotions are high and politics are in motion but critical minds must prevail as questions continue to linger.

For those who lost loved ones or have loved ones injured, our hearts cry out, our prayers are not hollow and our dedication to supporting you is never ending. Many who were there were too traumatized for interviews and we want to respect their requests to privacy as they grieve and cope with incredible devastation. We pledge to continue this story and seek answers to so much of the story that remains a mystery. May we unite in our humanity and build each other up with our love always and strive together to create a more just and humane world.