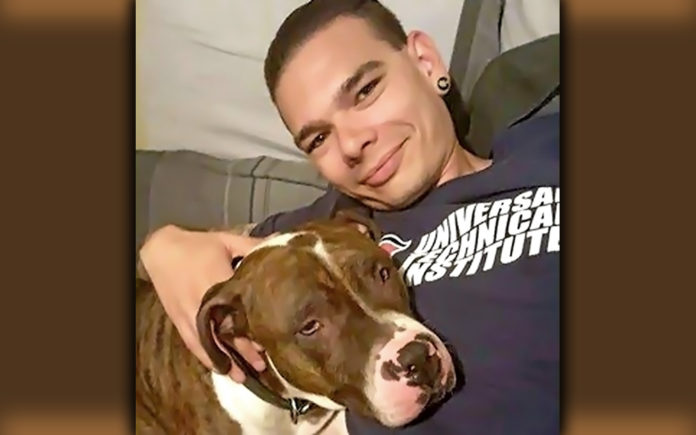 Twix is a special dog to San Bernardino resident John Silva, a loving canine companion who helps this Army combat Veteran stay calm and in control of his emotions.  He was diagnosed with post-traumatic stress disorder (PTSD) after completing deployments to Iraq and Afghanistan.  After six years in the military, he acknowledges he returned a changed man, occasionally becoming upset, depressed, and anxious.  Although Twix is not a certified service dog, Silva and his wife, Rachel Hester, report Twix was instrumental in keeping his stress under control.

We dog lovers know how their presence in our lives can lift our moods and help reduce stress.  The public is largely aware of how service animals assist physically disabled humans, such as guide dogs helping blind people. They are not as familiar about how an emotional support animal helps those with anxiety or other mental health condition.  An increasing number of returning combat veterans rely on the unconditional love and support from service dogs.

When his two dogs went missing from his backyard, Silva was devastated.  They soon found Duke, but Silva feared the worst for Twix knowing that the bonded pair of dogs always stayed together.  He was afraid for Twix given his breed, knowing that unscrupulous people steal pit bulls for illegal purposes.

Silva went to the media pleading for whoever had Twix to return him.  A San Diego based organization, “Sherri’s Project: Wounded Warrier Pack,” a nonprofit that trains service dogs for combat-wounded military, as well as victims of military sexual assault, offered assistance.  Veteran Teddy Garcia Jr., another Vet with a service dog, made finding Twix a full time endeavor.  Garcia understood the emotional roller coaster the dog’s absence created for Silva.

The San Bernardino Sun newspaper covered Twix’s story, and the article posted on their Facebook page went viral with half a million views and thousands of Shares.  A tearful Silva made appearances on local television and radio.  The publicity paid off.

A call came in, and Silva’s wife yelled excitedly to the volunteers, “We found Twix!”  A woman in nearby Arrowbear had Twix.  She was at a shopping area near the Silva’s home when she saw a man yelling at a dog to get out of his truck.  The friendly dog tried to get back into the truck, and the man yelled angrily and drove away, leading the good Samaritan wrongly conclude that he was abandoning his own pet.

It was an emotional filled reunion when Silva and Hester retrieved Twix.  Silva stated, “I started crying when I saw his head pop up.  Every day we received tips, many of them from folks trying to catch dogs they thought were Twix, and others from people offering us prayers and support.  It turns out Twix just wanted to go for a ride!”

Research substantiates that dogs can assuage the hypervigilance common in Vets with PTSD.  Many report that for the first time they can sleep soundly through the night, knowing that a naturally alert soul is standing guard over them.  Some veterans with severe PTSD cannot go out in public or maintain gainful employment without the support from their dog. These animals draw out the most isolated personality and having to praise and train them helps traumatized vets overcome emotional numbness.

Evidence is mounting that shows bonding with dogs has positive biological effects on all humans, including elevated levels of the hormone oxytocin.  Meg Daley with the Warrior Canine Connection reports, “This increased oxytocin improves trust, the ability to interpret facial expressions, and enhances pro-social affects—–the opposite of PTSD symptoms.”

John Silva is overcome with emotion recalling how the community rallied to help.   He states, “I had no idea how this story would bring in so many people to help.  I just want to thank everyone who helped and shared our story.”  Twix, an “angel in fur” is happy to be back home doing the job he loves.