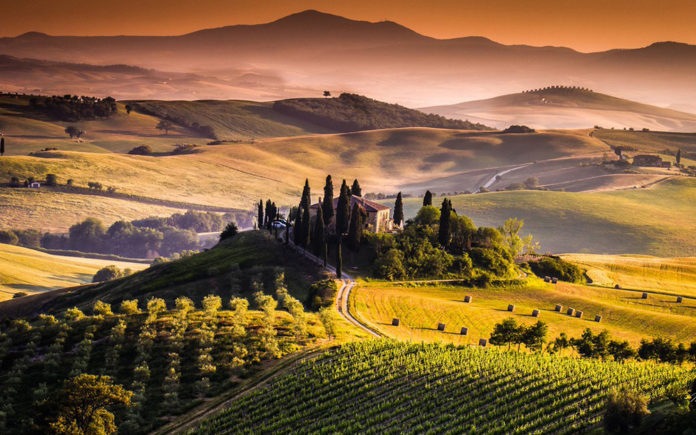 Wine folks are like everybody else: we love a good story and if it’s shaded with red wine stain—well, all the better!

The subject of this particular story surrounds Chianti.  Not as popular here in California as Cabernet Sauvignon, Merlot, or Pinot Noir, but most wine lovers surely have tasted the stuff—indeed, no one’s on the fence with it: you either appreciate its subtle earthy sanguine tart cherry notes or you prefer Merlot.

Some of us venerable vino voyagers still remember that rustic but romantic Chianti bottling—squat and straw-covered, later to be repurposed as a candle holder.  Back in the 60s and 70s, the wine was generally pretty acidic; it did work well with comfort foods cleansing the palate and all, that’s assuming you hadn’t sent back the bottle claiming it had turned to vinegar—and requesting a Merlot instead.

Today—with wine making at its best and government regulations making sure of it, Chianti Classico is world class wine that appears to be catching fire with so many enthusiasts around town.  And, to boot, it has the most darling mascot: Gallo Nero—the Black Rooster.  He is atop on the neck of every bottle of Chianti Classico as a symbol of the Tuscany region and as a black stamp of approval—and how he got there is legendary.

For as lovely as Italy is today, relatively speaking, it’s a fairly young unified nation, around 1870 or so.  Prior to that, this “boot” peninsula was made of up many regional kingdoms for hundreds of years, and of course producing wine throughout for a couple of thousand years.  Two of the most famous kingdoms back in the medieval times were those of Florence and Siena.

And of course as two adjacent renown kingdoms are wont to do, they were engaged in bitter conflicts over everything, including the amount of land possessed and controlling the wine produced in this beautiful and fecund landscape of Tuscany.  Eight hundred years ago, Sangiovese—the prominent Chianti grape, was the up and comer vino that Bacchus and his worldly legions frenzied and partied to. They couldn’t get enough! 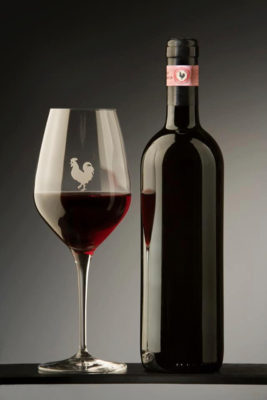 Yep—yet another territorial feud began.  With a hundred miles between Florence to the north and Siena to the south, each wanting a more than generous border between them, would a major battle have to settle things again?  Truth be told, these warring kingdoms were a bit tired of it all.  The Crusades, fighting the French, sparring with the Spanish—couldn’t we all just get along?  Well—medieval thought did progress; after a few days of conferencing and drinking much Sangiovese, the two cities did what sounded to be a sane conflict-resolver: pick a horse and a chicken and have a race!

As the story goes, the plan was this: each city would send a rider at the crack of dawn into the territory, and wherever they met up would be the official boundary delineation between the two republics.  Easy enough, but with no live-stream media nor smartphones around, who or what was going to determine the “crack of dawn” between the two towns a hundred miles apart?

Enter now, the roosters! But of course!! Clearly the choice of a morning screeching cock would be as much as a decisive factor as the horseman and the horse.  The Sienese, big on pomp and circumstance, of course selected the most beautiful white feathered rooster who was famously fed and almost as big as a goose, to showcase and place in a pen in the center of town for all to see and certainly hear. The Florentines, no slouch themselves when it comes to the dramatic, were a bit more savvy, perhaps cunning, in their selection: an old wretchedly skinny black rooster who hadn’t been fed in over a day or two and locked in a small cage.

Witnesses from each city were exchanged and stayed up to monitor the event. Early early the next day the black rooster had had it!  Even before the first highlights in the heavens, the bird was crowing, squawking and shrieking all about: The Florentine cavalier was off!

Back in Siena, things weren’t going so well. The town had partied so hard the night before that everyone slept in—including the rotund white rooster!  The townsfolk had to wake the bird up themselves.  No one said anything right-off, but most thought it was a bad sign.

The hot-hearted Florentine horseman must have thought himself as the most skilled on earth as he met up with the stunned red-eyed huntsman from Siena only seven miles outside of town.  As a result—and after all the medieval victory dances completed (and that old black rooster now living the high-life—thank you) nearly all of vast area of Chianti, passed into the hands of Florence—forever known as Chianti Classico. I guess one could quip that Siena got burned in that deal.

The Black Rooster emblem is far more than a symbol. It is a proud designation and represents the strict government regulations, overseeing everything from the yield to production that uphold the reputation of Chianti Classico. Branded in 1384 as the emblem for the League of Chianti, and officially adopted by the Chianti Classic Wine Consortium in 2005.

Avanti! Chianti!—welcome again Chianti to the desert’s autumn and winter tables, where we’ll warm our hearts with your soothing Sangiovese and varied culinary fare.  We’ll be tasting through these Italian delights and reviewing them for our next column.

Here’s to you Gallo Nero—Saluté!