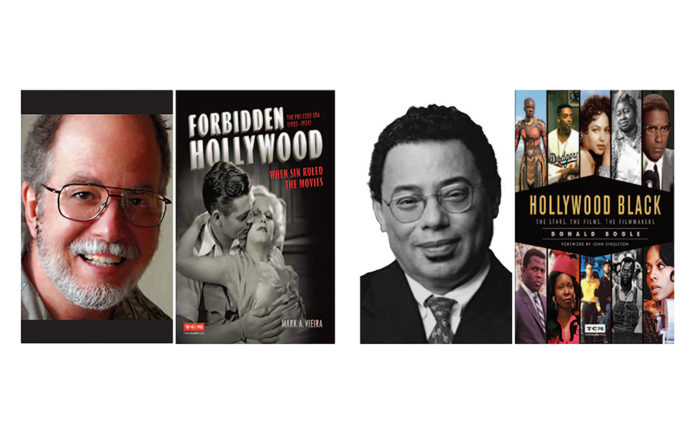 Palm Spring International Short Film Festival is in full swing and the city is teeming with talented filmmakers and film fans.  With excellent text and spectacular photos, these two books about “Hollywood” are a must for the cinephile’s library.

This is the ultimate guide to a gloriously entertaining and strikingly modern era of “Pre-Code,” adult themed, and racy films made between 1930 and 1934.  During this time, studios were supposed to abide by an industry agreement to not make “immoral movies,” but the depression dragged down box-office receipts, and filmmakers violated the agreement!

Author Vieira selects 22 films that spawned enforcement of the Production Code.  This is a tremendously entertaining read and the pictures are red hot and sensationally provocative.

Vieira does an excellent job setting up the struggle to control America’s film industry.  He includes letters and never before published documents from the Catholic consortium who managed to take control of the Protestant market from a Jewish-run industry.  This book is a lavish pictorial feast, a political thriller and a guide to the sexiest movies made before censorship.

This is a riveting chronicle of black performers and filmmakers from the time of the silent era with white actors in blackface to modern masters Ava Du Vernay and Barry Jenkins.

Author and scholar Bogle, covers it all with gorgeous, glossy photos and insightful text.

The book looks closely at the changes in the film industry with the arrival of sound motion pictures and the Great Depression when black performers began to find a place in Hollywood — up to the recent “Black Panther” film.

This book reads like a colorful and engaging history lesson as the chapters move through time revealing the changes with images that came about with the evolving social and political atmosphere of the country from the Civil Rights era to the Black Power movement.

Readers get an insightful view of “blaxploitation” era films and the emergence of stars Diana Ross, Eddie Murphy and directors Spike Lee and the late John Singleton.

Singleton wrote the forward to Black Hollywood briefly sharing his life growing up in Los Angeles, his love for movies and his time attending USC for film studies.   This is particularly moving now that he has passed.  He writes “… Hollywood Black encapsulates the historical essence of the black movie-going experience in this country, and I’m proud to be a part of it.”

From The Birth of a Nation to Black Panther this book tells the story of the hard working, ground-breaking actors, producers and filmmakers of the past and the exciting emerging talent that has a voice in the new millennium.  As a reader and movie fan, I am looking forward to the future of black cinematic achievement.

Both books have excellent notes, indexes and bibliographies.  The abundant pictures in these hardcover books are enough to keep you engaged and captivated for hours.  If you love film, you will treasure Forbidden Hollywood and Hollywood Black.