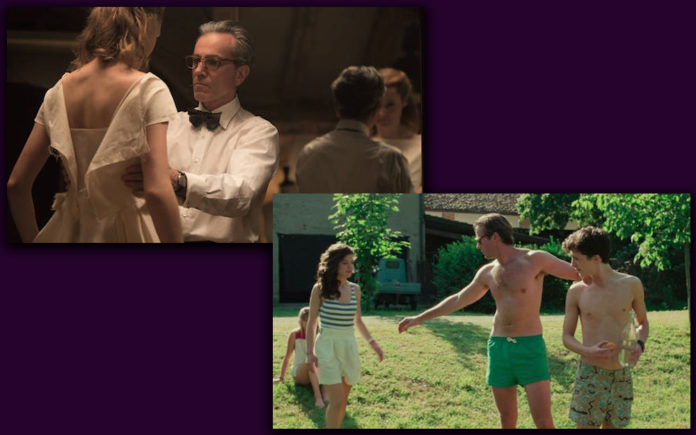 How nice it is for movie lovers to have the opportunity to see two current, critically praised films in what must be the most comfortable venue in the CV.  Not only is the theater fully renovated with new restrooms, reclining seats, wide aisles, a café with custom sandwiches, wine, beer, gourmet ice cream, classic home-made popcorn and a variety of favorite movie drinks and snacks, but it is the perfect place indeed to while away an afternoon and catch-up on the most talked-about movies of the day.  Consider these two titles that have been lauded for numerous award considerations.

There’s much to praise in Paul Thomas Anderson’s eighth film (second with Day-Lewis).

The precision and unrelenting focus of the main character’s work and style is matched by the filmmaker’s craft, especially his eye for detail and telling compositions.

This hauntingly sublime drama makes real an engaging narrative filled with humor, wit and breathtaking romantic tension held together by yet another obsessively informed performance from Daniel Day-Lewis who, by the way, says he plans on retiring from the acting profession.

Set in 1950’s London where famous dressmaker Reynolds Woodcock (Day-Lewis) and his sister Cyril (Lesley Manville) are the locus of British couture with their House of Woodcock’s distinct, in-demand style.

Woodcock has many women friends who eagerly off inspiration and companionship to the confirmed bachelor – that is, until he meets unbending and determined Alma who becomes attached to Woodcock as both muse and lover – disrupting his carefully tailored life.

Big recommendation for this coolly beautiful movie that explores, examines and celebrates the creative journey of an artist’s life — and the fascinating women who keep his mojo percolating.  A huge plus is Johnny Greenwood’s lush, seductive score.

CALL ME BY YOUR NAME

Luca Guadagnino’s melancholic, sensual and emotional film is a poignant look at the intoxicating feeling of falling in love in a beautiful place.

Timotheé Chalamet and Armie Hammer star in this adaptation of  André Aciman’s internationally acclaimed romantic novel set in the north of Italy during the pivotal pre-war summer of 1938.

Elio Perlman (Chalamet) is an articulate and gifted 17 year-old who spends his days at the family’s 17th century villa.  He indulges his love for classical music, reading and flirting with his pretty friend Marzia (Esther Garrel).  He has a good relationship with his dad (Michael Stuhlbarg) a classics professor.  His mom Annella (Amira Casar) is a translator who lavishes on her son the gifts of culture.

One day Elio meets Oliver (Armie Hammer), a charismatic American seven years his senior working on his doctorate as a summer intern for Elio’s dad.

Elio’s sophistication and intelligence make it clear he is no longer a kid, but already a full-fledged adult, yet there’s a much that remains innocent about Elio, especially regarding matters of the heart.

In the sun-dappled beauty of the physical location, Elio and Oliver discover the heady feelings of young love that will impact their lives forever.

One day, Oliver (Armie Hammer), a charming American scholar working on his doctorate, arrives as the annual summer intern tasked with helping Elio’s father. Amid the sun-drenched splendor of the setting, Elio and Oliver discover the heady beauty of awakening desire over the course of a summer that will alter their lives forever.

This is much more a story about “pure love” than a “gay movie” as one fan described it.  This is a universal story of the most natural of all God-given human instincts as opposed to one of just discovering sexual identity.  Who cannot relate to those first stirrings of longing and desire?

The stunning locations and Sayombhu Mukdeeprom’s exquisite cinematography are almost reason enough to see this movie.  Even more impressive is the hard-to-believe fact much of the movie was shot (with one lens) during a record-breaking summer rainstorm!

See both these acclaimed films on one of the big screens at Mary Pickford’s D’Place.  Get tickets online and show the e-receipt on your smartphone when you walk in.  Easy does it.