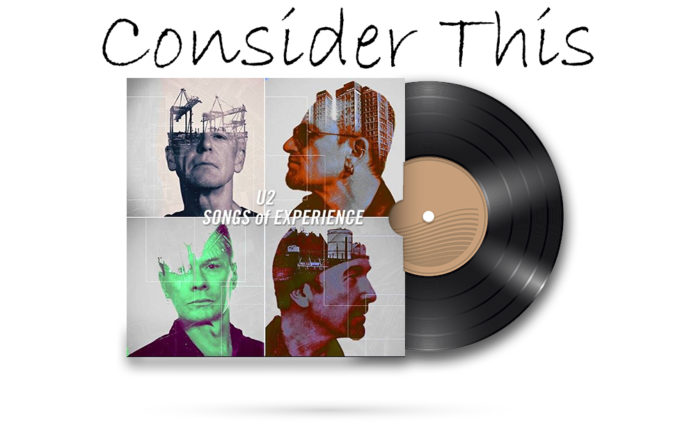 If you came of age in the early ‘80s, chances are you remember U2 as one of the most vital, exciting and innovative bands of that era. These days, your kids probably view them as the musical equivalent of Mom Jeans.

The Dublin four-piece, which features vocalist Bono, (ne’ Paul Hewson), bassist Adam Clayton, drummer Larry Mullen, Jr. and the Edge (ne’ Dave Evans) on guitar, formed 42 years ago. 14 year old Larry placed a notice on their school bulletin board in search of musicians. Initially, the Edge’s older brother, Dik was also in the group, (rather briefly as the Larry Mullen Band), along with friends Ivan McCormick and Peter Martin, first known as Feedback, and they primarily covered Beatles and Stones songs.

By 1977, they were down to a quartet; their sound was heavily influenced by the burgeoning Punk movement, as it fell in line with their limited musicianship. Within months they played their first official gig as The Hype, but by 1978 they settled on the U2 moniker. In their final year of high school, they competed in, and won a talent contest sponsored by Guinness. First prize included time in a real recording studio.

Pretty soon they were being represented by Stranglers’ manager Paul McGuiness, who lined up a few gigs in London. As their fan base increased, they were offered a record deal with Island Records, home to Bob Marley, Traffic and Nick Drake. It was a heady time for four Catholic lads still in their late teens. Their debut, aptly entitled Boy, arrived in late 1980. Produced by Steve Lillywhite, it offered a surprisingly expansive sound. Razor sharp, it drafted off Punk’s explosive energy, lyrically, it never shied away from the band’s ecumenical outlook.

Soon U2 was opening for kindred spirits like the Talking Heads and their record had inched into the Billboard Top 100. Their sophomore effort, October, arrived in late 1981. It achieved even more commercial success.  In Great Britain it peaked at #11 on the charts. MTV, then in its infancy, began showcasing the band’s videos, it felt as though they were on the brink of greatness.

1983 proved to be their watershed year. In the Spring they released their iconic War album. It hit the U.K. charts at #1 and quickly gained traction in the U.S. A brilliant distillation of Punk spirit, epic instrumentation and trenchant lyrics, it catapulted the band to arena headliners. A live EP recorded at Red Rocks cemented U2’s status as one of the most popular and important bands in the world.

Their ascendance moved at lightning speed. U2 became an unstoppable juggernaut. For their fourth long-player, they were hoping to shake things up, so they sought out producer Brian Eno. The former Roxy Music mastermind had shepherded David Bowie’s game changing Berlin Trilogy in the late ‘70s. Along with Daniel Lanois, he helped shape 1984’s The Unforgettable Fire, which generated their first Top 40 hit in America, a graceful and heartfelt ode to Martin Luther King entitled “Pride (In The Name Of Love).”

But it was their fifth effort, Joshua Tree, that propelled U2 to worldwide superstar status. Released in 1987, the record achieved universal critical acclaim. They tackled themes of mortality and redemption, cloaking them in rich melodies and sweeping arrangements. Proclaimed a masterpiece, it was an unstoppable force earning them their first #1 record in America. They closed out the ‘80s with a double live effort, Rattle & Hum, which was accompanied by an earnest, yet pretentious concert documentary.

As the ‘90s dawned, U2, along with Eno and Lanois had set up camp in a Berlin studio recording their sixth album. Inspirations included David Bowie’s icy Teutonic triptych, Low, Heroes and Lodger, as well as Punk/Poet priestess Patti Smith, and the thriving Madchester scene in England. After a lengthy gestation they released Achtung Baby. Critical Acclaim was matched by commercial success, the mammoth Zoo TV Tour followed and it seemed like U2 could do no wrong.

Creatively, they hit a wall with their final two albums of the 20th century. Both were glaring mis-steps. 1993’s Zooropa, felt mired in torpid dance and techno sounds. Side projects, and one-off singles kept the band semi-active for the next four years. Then in 1997, the Pop album jettisoned their anthemic guitar style, delving deeper into Electronica, Ambient sounds and the nascent Drum & Bass movement. Longtime fans were underwhelmed, and ultimately the record was viewed as a disappointment.

As the 21st century dawned, the band reunited with Eno and Lanois to record their 10th album. All That You Can’t Leave Behind seemed like a bracing return to form. The album was actually won seven Grammy Awards, and the ensuing “Elevation” tour broke records grossing $110 million dollars.

In 2004, they reunited with Producer Steve Lillywhite and released How To Dismantle An Atomic Bomb. Guitar driven and urgent, it offered tart meditations on love, death and spirituality. The album went on to win nine Grammy Awards.

Naturally, following two well-received, albeit conventional, records, U2 veered wildly off course again. 2009’s No Line On The Horizon felt dull and derivative. In fact, the lead single, “Get On Your Boots,” felt wholly lifted from Elvis Costello’s epochal Punk standard, “Pump It Up.” After the requisite world tours another five years lapsed before they released their 13th studio effort, Songs Of Innocence; the record practically screamed mid-life crisis.

Not only was the album produced by a rotating cast of “hip” producers, (Danger Mouse, Paul Eppworth and Ryan Tedder), the band committed the extreme tactical error of partnering with Apple and the entire record would come pre-loaded on the new iPhone 6 smart phone. It was also added, Big Brother style, to every Apple user’s digital library, sans permission. The backlash was swift and merciless.

Millennials didn’t give a shit about U2 music, and the download was characterized as musical “junk mail.” The promotional gambit completely overshadowed the album’s content, but the reviews were mixed at best. Critics complained the music drafted off newer hit makers like Imagine Dragons and Airborne Toxic Event. It felt as though U2 was chasing its tail.

Now, after a three year absence, the band has returned with Songs Of Experience, characterized as a companion piece to Songs Of Innocence. Whereas …Innocence concentrated their teenage beginnings, …Experience focuses on the world at large and the myriad changes that have accompanied the last few years.

The first three tracks, attack, in classic U2 fashion. “Love Is All We Have Left,” serves as a breathless overture, awash with cinematic strings, Bono’s croon-y vocals and lyrical platitudes that seem bumper sticker-ready. (“Nothing to stop this from being the best day ever”).

On “Lights Of Home,” shards of metallic guitar collide with tensile bass lines, crashing drums and expansive piano. The lyrics tap into that rugged brand Of Christianity U2 practically pioneered. The search for soul-salvation Is prickly, yet predictable; “Oh Jesus if I’m still your friend, what the Hell, what the hell you got for me?” A spatial guitar solo and Gospel choir coda bring it all back home.

Bono’s stentorian vocals are out in front of “You’re The Best Thing About Me,” followed closely by the Edge’s scattershot riff-age and a crunchy backbeat. Muscular verses fold into sweet choruses, as tightrope bass lines underscore incendiary guitar pyrotechnics on the instrumental break. The song echoes their epic ‘80s heft, rendering it nearly irresistible.

The album feels front-loaded with crowd-pleasers, and the next two tracks, “Get Out Of Your Own Way” and “American Soul” are casually intertwined. The melody and arrangement of the former shares the same emotional and ecclesiastic uplift they perfected on their “City Of Lights” song from 2004.

Gossamer Synths glitter beneath a propulsive beat and layered guitar. The lyrics seem address and encourage the heterogenerous protest movements that have sprung up in the wake of America’s reality star presidency; “Fight back, don’t take it lying down you have to bite back, the face of liberty is starting to crack/She had a plan until she got a smack in the mouth and it all went south.”

A combustible sermon, delivered with fire and brimstone by Kendrick Lamar, (arguably the most interesting Hip-Hop artist on the planet these days), connects “Get Out…” to “American Soul.” The latter kicks into gear with Mastodon power chords and a bludgeoning beat. It quickly accelerates into a Glam-tastic stomp. A cautious love-letter to America (this country has been a decades-long obsession for these Dublin lads), the lyrics contend “It’s not a place, this is a dream the whole world owns/The pilgrim’s face, it had your heart to call her home.” Sweetly inclusive sentiments if you forget Native American genocide. Despite a corny chorus, this yelp-y call to arms has its heart in the right place, and the Punky instrumental break features strafing staccato guitars, air raid synths and a cataclysmic rhythm.

The best songs here are “Summer Of Love,” “The Showman (A Little More Better),” and “Red Flag Days.” “Summer…” doesn’t refer to the 50 year old phenomenon that occurred in San Francisco, that popularized (and ultimately killed) the hippie movement. Modal guitar notes crest over a slip-stitch rhythm and see-saw strings, locking into a slinky cha-cha-cha. Although Bono’s mien is seductive and intimate his concerns are geo-political, focusing on Syrian refugees; “I’ve been thinking of the West Coast, not the one that everyone knows/In the rubble of Aleppo, flowers blooming in the shadows for a summer of love.”

Strummy acoustic guitars lock into a Latin lilt on “The Showman…” effortlessly echoing Dublin’s hometown heroes, Thin Lizzy. Bono sounds appealingly humble as he confesses “It is what it is, but it’s not what it seems, this screwed Up stuff is the stuff of dreams/I got enough low self-esteem to get me where I want to go.”

Swaggering power chords announce the arrival of “Red Flag Days,” buttressed by a kinetic martial cadence.  It’s a sleek kissin’ cousin to “Sunday Bloody Sunday.” Striving to be anthemic, the lyrics feel stirring and passionate, about, umm…surfing? Or maybe sex, the metaphor is unclear, but the arrangement is compelling enough to overlook it.

Other interesting tracks include the atmospheric melancholia of “The Little Things” and the fluttery encomium of “Landlady.” The rumbly tesla coil spark of “The Black Out,” is a dystopian manifesto that takes a snotty swipe at the Cheeto-in-chief; “Statues fall, Democracy is flat on its back, Jack/We had it all, and what we had is not coming back, Zac/A big mouth says the people they don’t want to be free For free.”

The album closes with “13 (There Is A Light).” Funereal keys lap over a stripped-down arrangement that highlights Bono’s plaintive voice. An unvarnished paean to a higher power, the lyrics offer hope and comfort in these very dark times; “I know the world is done, but you don’t have to be, I’ve got a question for the child in you before it leaves/Are you tough enough to be kind? Do you know your heart has its own mind? Darkness gathers around the light, hold on, hold on.”

Yes, Kendrick Lamar is featured on this record, as is Lady Ga-Ga and even those droopy Haim sisters, thankfully, they don’t really alter U2’s tried and true sound. Their need to remain au courant nearly sabotages their hit-making instincts. Speeding toward age 60, these guys must realize they’ll never be the scrappy upstarts that threw down the musical gauntlet with War. That was 35 years ago! It’s about time U2 embraces their elder statesmen status. Songs Of Experience is a step in the right direction.