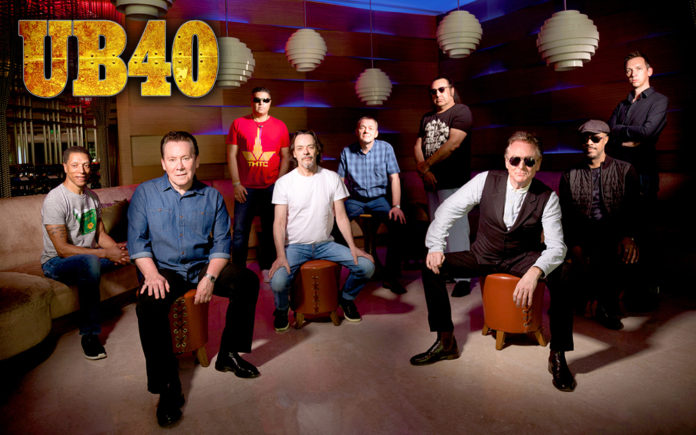 40th Anniversary ‘For The Many’ Tour Performing at SPOTLIGHT 29 CASINO SATURDAY, AUGUST 31ST

UB40 are reggae artists who built their fame with a magnificent medley of original material and some very successful covers to become one of the world’s best-ever selling artists thanks to hits like ‘Food for Thought,” “Red Red Wine” and “I Can’t Help Falling In Love.”

Their story transcends working-class origins and the long haul they endured to become one of the world’s most successful reggae bands.

UB40 is James Brown, Duncan Campbell, Robin Campbell, Earl Falconer, Norman Hassan, Martin Meredith, Tony Mullings, Laurence Parry & Brian Travers. The band will be bringing their 40 years of momentous reggae to the Spotlight 29 Casino Showroom in Coachella, California on Saturday, August 31, 2019 at 8 p.m. Tickets can be purchased at spotlight29.com or at their box office.

Coachella Valley Weekly spoke with vocalist and guitarist Robin Campbell from his home near Birmingham, England where he was readying for his ride to Heathrow Airport to begin the U.S. leg of their 40th Anniversary ‘For The Many’ Tour.

CVW: Earlier this year, your saxophonist Brian Travers recently had two brain tumors removed. How is he doing?

Campbell: “He’s recovering. He’s a lot better than he was. He’s still undergoing treatment. He’s going to be out of circulation until the end of the year at least.”

CVW: I’m aware that you’ve performed in the Coachella Valley in the past. Any recollection of past shows?

Campbell: “I’m really not sure. I’ve been told that we’ve played in the Coachella Valley before, but I can’t remember it. With four decades of touring it gets more and more difficult to remember places, Ha Ha!“

CVW: UB40 is one of the most popular acts to come out of Birmingham, England, the same area where Led Zeppelin, Duran Duran, Judas Priest, Black Sabbath and Electric Light Orchestra (E.L.O.) were found. It’s amazing!

Campbell: “We are proud of where we’re from. We have five of the original six members still in the band. It’s pretty much the same. We have a couple of extra horn players and keyboard player. We now have my other younger brother as vocalist. Basically, we’re the same mix as we’ve always been. We’re the same gang of friends that we’ve been since we were young.”

Campbell: “I remember quite a lot about it really. I’ve been back to the venue many times over the years. It’s a favorite hangout of ours and we drink there regularly. I know the venue well and I remember being quite terrified. It was the first time and we had no idea how the audience was going to react to us, and it turned out favorable. I was very encouraged.”

CVW: UB40 is known to be involved in political and societal issues that are important.

Campbell: “We’re a politically-minded group of people and we have been active in various causes over the years. Rock Against Racism was one of our earliest projects that we supported. We observed the cultural boycotts of South Africa until Nelson Mandela was out of prison and apartheid was over, so we’ve always been political individually and as a band. We’ve taken stances.”

CVW: The band name comes from a government form issued to people claiming unemployment benefits. According to a recent report, the unemployment rate in the UK is the lowest level in 44 years.

Campbell: “I think that is the grossest misrepresentation of the actual facts. They’re not the lowest figures at all. We have the highest poverty levels that we’ve had for many generations. We have the highest poverty levels for children. There are millions of people living off food banks. But of course, you can map out the figures any way you’d like to make it appear that you have the lowest unemployment levels and that’s exactly what they’ve done. They’ve done that by forcing people to work for minimum wage and there are millions of people who are in poverty and starving. That’s basically how I feel about that. It’s a pile of bullshit and lies.”

CVW: How has UB40 adapted to the changes in the music industry and how music is published and sold?

Campbell: “That’s just the march of time and technology. There’s not much you can do about it. It’s the way of the world. Everything changes whether you like it or not. The older you get, probably the less you like it. I still listen to a lot of vinyl.”

Campbell: “I think possibly influences like that are subconscious. I don’t think of any particular singer when I’m singing. I just try to sound as good as I can. I don’t think of myself in the same class as those artists. Those are people that have changed the way pop music is sung. I’m nowhere as good a singer as any of those you mentioned. I just do my best. I love harmonizing. I’m equally influenced by The Everly Brothers.”

CVW: UB40 has a significant musical and social influence on other artists. How aware are you of this?

Campbell: “That’s something I’m very proud of. Technically, as a singer, I don’t rate myself highly enough to be mentioned in the same sentence as Sam or Stevie, who are sublime singers. I only wish I had a tenth of their talent.”

CVW: Your new album For the Many was released in March 2019 as well as a Dub version of the record. Both have received enthusiastic reviews from fans and critics. Could the release of your first album since 2013 have gone any better?

Campbell: “It would appear it’s exactly how we want it to be. The aim was to get back to what we were doing in the early 80’s and try to sound similar and to produce the music in the same way to have all the Dub passages and the political content. friends and fans are all saying the album is like a throwback. It could be the third album from our career. Which is exactly what we were trying to do. It’s very gratifying to hear that. The response in the UK is stupendous. The response from the fans has been phenomenal.”

CVW: The reaction of the audiences at your recent live shows is remarkable. What are you expecting from U.S. crowds?

Campbell: “We hope it happens in the states and in Coachella. We want the same thing. It would be great if we got the same reaction from amazing crowds. It’s just wonderful to be still doing what we do and have the kind of support that we get. Wherever we go is just phenomenal. I guess that’s why we still do it.”