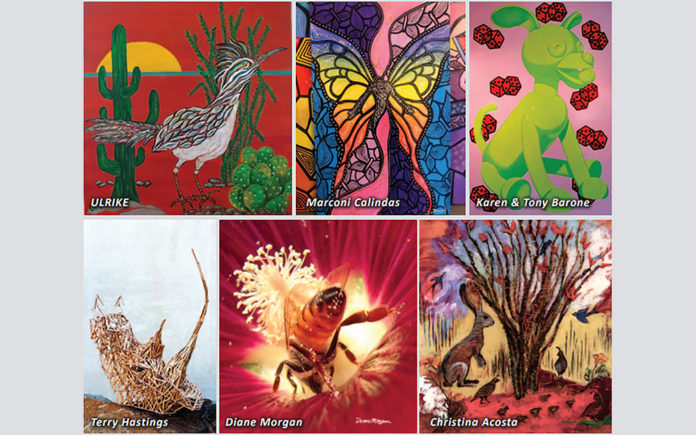 “I was recently hired to create an abundance of art programs and exhibitions at UCR, Palm Desert Campus,” says newly appointed Manager of Art Programs, Terry Hastings. “We’ve held several shows in the past, but are now including art classes, workshops and ‘the art of business’ lectures.”

He points at the walls filled with wonderful local art. A show called “The Dog Days of Summer,” benefitting the Palm Springs Animal Shelter, featuring paintings, photography and 3D life size installations of animals is on display starting July until August 26. Forty local artists are represented, something for everyone.

“The turnouts to the Opening Receptions have been fantastic. We average about 500 guests.” Hastings is especially excited about the Karen and Tony Barone’s installation, the renowned wife & husband artist couple whose works have been exhibited and collected around the world.

The Barone’s took a non-circuitous route before moving their high voltage creativity to the California desert. They “got their stripes” in New York City’s Soho; then worked from a hillside studio on their horse farm in East Tennessee. They then moved to Los Angeles where they became a powerful artistic presence while working out of their massive canal-side studio in the artist community of Venice Beach. They now live and work in Southern California’s Palm Springs in a home and studio compound they call their “paradiso secco” (dry paradise).

Another well-known artist, Marconi Calindas, dabbles on black lines and pure hues as his trademarks of distinctive rendering style. While his subject matter varies from pop icons to triumphs of the human spirit, it’s the boldness of his visual vocabulary that holds the viewers attention and continues to attract a widening audience. He currently features his art in Europe and met with the South Africa Ambassador to Greece, who loved his art during the event.

Other recognizable names include Cristina Acosta, Allen Loman, who swapped his suit and tie for paint-spattered jeans and a t shirt. He feels like a ‘kid with his Crayola,’ always having a smile on his face.

Ulrike’s life size 3D Deer Installation and Magical Realism of fish and birds gives the show a whimsical feel on the second floor of the building. “I love animals.  I would have a whole house full of them,” says artist Sasha Middleton. She volunteers at the local animal shelter, regularly fostering puppies and kittens. “I also volunteer as a shelter photographer. I believe that one photo can make a difference to capture someone’s attention and inspire them to adopt.”

“Dog Days of Summer” Show is open now until August 26

UCR – Campus, Parking in Lot B