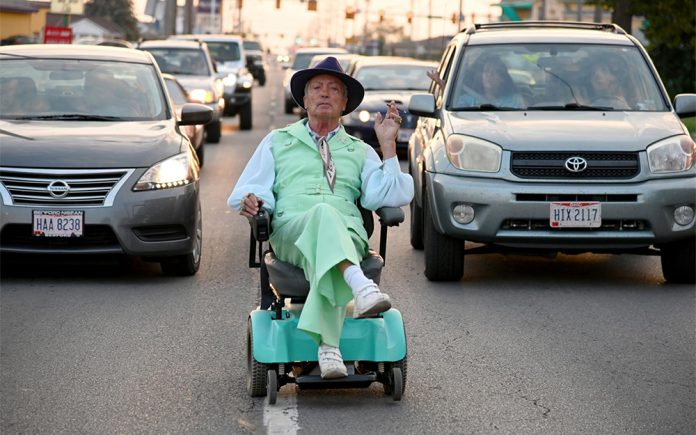 In ancient Greek culture, the swan song was used as a metaphor for a final gesture, effort, or performance given just before death or retirement.  Anton Chekhov wrote a novel with the same title about an aging actor contemplating his final stage appearance.

For the iconic actor and Palm Springs resident Udo Kier, Swan Song is but another movie in his ever-expanding canon of feature films.

Kier, 76, stars in Swan Song as Pat Pitsenbarger, an aging, retired hairdresser who escapes from his nursing home to style the hair of his most famous client after her death.   In doing so, Pat rediscovers his own glamour finds a deeper appreciation for his friends and dazzling career.

“I love the work,” said Kier.  “Swan Song was fun for me from beginning to end.  All the actors were so good to work with.  Everyone was terrific.”

The Swan Song script was sent to Kier’s home in Palm Springs.

“The story was very strong,” said Kier.  “The director came out and we talked about the character.  There was so much I liked.  It’s a generational film.  People can relate to the characters.”

Swan Song was shot on location in Sandusky, Ohio.

“He is such a pro and a pleasure to work with,” said Jackson Warner Lewis, a New York cinematographer who photographed the film.  “Everyday he’d walk up and know exactly what to do.”

Kier’s co-stars include: Jennifer Coolidge, Linda Evans and Michael Urie.  The film is directed and written by Todd Stephens.

“Udo was the lead in Swan Song – in every scene,” said Kassandra DeAngelis, the production designer on the project.  “We couldn’t film anything without him.  He’s an absolute professional.”

Kier serves as an ambassador to both the Palm Spring winter and summer film festivals.

During the 31st Palm Springs International Film Festival (January 2020, on the cusp of the pandemic), Kier was honored by the City of Palm Springs and the Chamber of Commerce.  He was presented with a plaque and granite star on Palm Springs Walk of The Stars for his career as a “cult cinema actor.”  The City Council of Palm Springs dedicate his star and proclaimed the third day of January 2020 to be:  Udo Kier Day

At the time, Kier had three films in the 2020 winter festival.

Local weatherman Patrick Evens attended the ceremony and said at the time,  “I can’t think of anybody who deserves this star more than Udo.  Some may not know him as a household name, but this guy is a superstar.  He is a lover of Palm Springs, and he is so enthusiastic about living here, and I love that.  Udo getting a star is terrific and very apropos.”

Kier was gracious and humbled by the large crowd that turned out to see him.

Palm Springs resident Kiki Tormo was present when Kier receive his star.  She was wearing an Andy Warhol patterned print dress, shoes and accessories.  (Kier worked and was friends with Warhol.)  Her family is half German (Kier was born in Germany) and she has followed his film career.

“He’s very friendly,” said Tormo.  “You run into him around here all the time.  He’s never aloof.  I’m glad he has a star here.”

Kier is being acknowledged by film reviewers around the world for the amazing actor he is, has been and will continue to be. 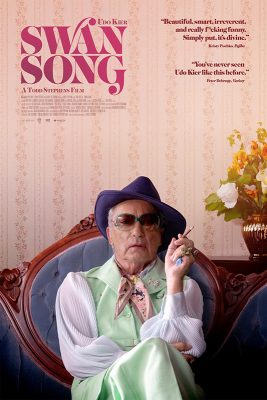 “This is not my swan song,” Kier said, before he named a half dozen projects he has completed since Swan Song wrapped.   “I am selective and choose the roles that I like.  I love working in my garden, that’s nice, but I will never retire from acting.”

This iconic movie star’s remarkable body of work and high profile, make him a local treasure.  His own swan song is not even on the horizon.