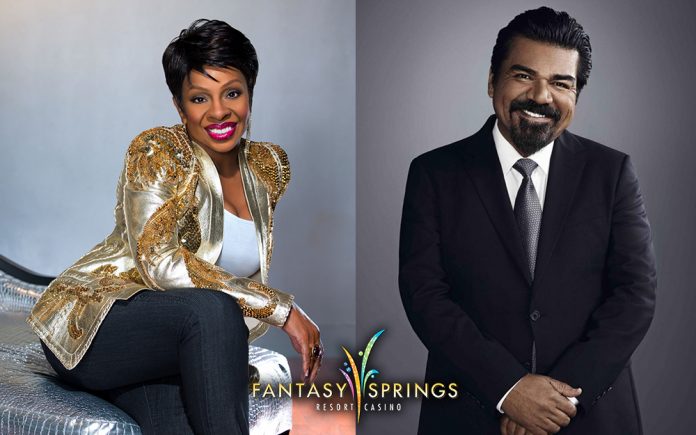 Gladys Knight is one of the most enduring artists of the past half-century, having racked up No. 1 hits on the pop, gospel, R&B and adult contemporary charts. Now the seven-time Grammy Award-winner — best known for the classics “Midnight Train to Georgia,” “I Heard it Through the Grapevine,” and “If I Were Your Woman” — is returning to Fantasy Springs Resort Casino’s Special Events Center on Friday, May 22nd at 8 p.m. Tickets starting at $39 go on sale this Friday, January 24th at the Fantasy Springs Box Office, via phone (800) 827-2946 and online at www.FantasySpringsResort.com.

The Georgia native started performing gospel music at age of 4, and began fronting the classic lineup of Gladys Knight & The Pips in 1960 at 16. With Knight singing lead and The Pips providing lush harmonies and graceful choreography, the group achieved iconic status throughout the ’60s, ’70s and ’80s. Top 20 hits like “Every Beat of My Heart” and “Letter Full of Tears” set the stage for an amazing run of top 10 singles including “Neither One of Us (Wants to be the First to Say Goodbye),” “I’ve Got to Use My Imagination,” “Best Thing to Ever Happen to Me” and the chart-topping smash “Midnight Train to Georgia,” which established them as the world’s premiere pop/R&B vocal ensemble.

Continued success came with hits like “On and On” from the 1974 Academy Award-nominated soundtrack of Curtis Mayfield’s “Claudine.” Knight enjoyed another No. 1 hit in 1985 when she teamed with Stevie Wonder, Elton John and Dionne Warwick on “That’s What Friends Are For.” She paired with Wonder again in 1994 for the successful Frank Sinatra Duets II album, joining his voice on “For Once in My Life.” All told, Knight has recorded more than 38 albums throughout here career, including her most recent solo album, 2014’s Where My Heart Belongs.

In 1995, Knight earned a star on the Hollywood Walk of Fame, and the following year was inducted into the Rock and Roll Hall of Fame. Rolling Stone magazine placed her at No. 51 on its list of the 100 Greatest Singers of All Time. In February 2019, Knight was revealed to be the Bee on FOX’s hit series The Masked Singer, which she placed third.

A devoted humanitarian and philanthropist, Knight remains involved with a number of worthy causes, including the American Diabetes Association, the American Cancer Society, the Minority AIDS Project, amFAR and Crisis Intervention, and The Boys and Girls Club. She has been honored by numerous organizations including the NAACP Legal Defense Fund, Congress of Racial Equality (CORE), B’Nai Brith, and is a recipient of BET’s Lifetime Achievement Award.

RESORT CASINO ON SATURDAY, MAY 30th

Lopez is currently on the road, bringing his cutting-edge, cross-cultural brand of humor to arenas across the country. He was recently seen in the Latino superhero movie “El Chicano” alongside Raúl Castillo, Aimee Garcia and Emilio Rivera, and is set to appear in the upcoming thriller “The Tax Collector” with Shia LaBeouf and Lana Parrilla.

For two seasons, Lopez hosted “Lopez Tonight,” a late-night television talk show on TBS. This represented Lopez’s return to television after co-creating, writing, producing and starring in the groundbreaking his namesake sitcom, which ran for six seasons on ABC. The show remains a hit in syndication.

In 2015, Lopez appeared in and co-produced the inspirational drama “Spare Parts,” based on the true story of four undocumented Mexican-American teenagers who team up to win the national robotics competition. In 2014, Lopez starred in the ensemble comedy “Saint George” on FX, which he co-created.

Lopez has been featured in three HBO specials, including “The Wall” in 2017. He received Grammy Award nominations for Best Comedy Album for “Tall, Dark and Chicano” (2009), “America’s Mexican” (2007), “El Mas Chingon” (2006), and “Team Leader” (2004). He also voiced animated characters in the animated blockbusters “Gnome Alone,” “Rio,” “Escape from Planet Earth,” “The Smurfs,” and “Beverly Hills Chihuahua.”

Lopez’s 2004 autobiography “Why You Crying?” was a New York Times bestseller. His second memoir, “I’m Not Gonna Lie And Other Lies You Tell When You Turn 50,” was released in 2013. He was also the focus of the award-winning documentary, “Brown is the New Green: George Lopez and the American Dream.”