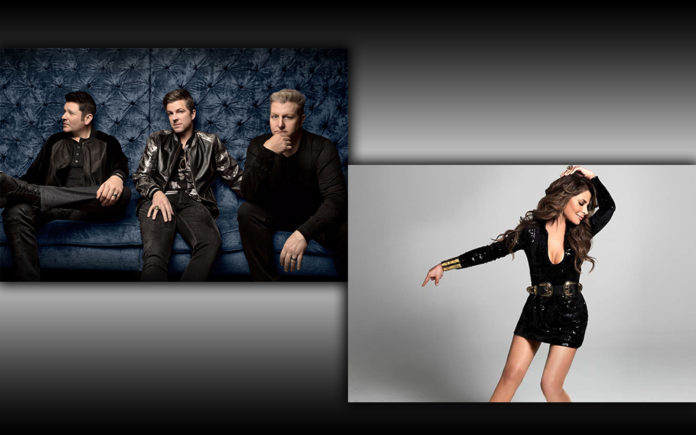 If any act embodies the place to which country music has evolved in the new century, it is Rascal Flatts. Since their inception in 1999, the trio has helped change the face of popular music and now they’re bringing their signature sound to The Special Events Center at Fantasy Springs Resort Casino on Friday, November 2, 2018.

Boasting more than 23.4 million albums sold, Rascal Flatts has become one of the most powerful acts in country music today. The first album from the award-winning trio was released in 2000 and ever since, Rascal Flatts has dominated the radio with a string of hit singles, including “What Hurts The Most,” “Me and My Gang,” and “Bless the Broken Road.”

Rascal Flatts’ trademark sound–Gary LeVox’s powerfully emotive lead vocals coupled with the soaring harmonies of Jay DeMarcus and Joe Don Rooney set amid world-class arrangements and production–has made the band the standard bearers for cutting-edge country. Drawing on Nashville’s best tunesmiths and their own enviable songwriting skills, they have released some of the most important and successful music to come out of Nashville in recent years. Songs like “These Days,” “Why Wait,” “Banjo,” “Take Me There” and their cover of “Life Is A Highway” from the Pixar film Cars are just a few of their massive hits. Along the way, they have placed 17 #1 singles to date.

The guys from Rascal Flatts are looking forward to bringing their seamless harmonies to The Special Events Center at Fantasy Springs Resort Casino in November. Whether the trio is supporting a new album or revisiting classics from its extensive catalog, every Rascal Flatts show is a treat for fans of country music.

Grammy Award-winning pop legend and dance superstar Paula Abdul has announced a new North American tour this fall – STRAIGHT UP PAULA! – her first solo outing in over 25 years and she will be performing at The Special Events Center at Fantasy Springs Resort Casino on Saturday, November 17, 2018.

The singer / dancer / choreographer will be performing her most memorable hit songs including “Straight Up,” “Forever Your Girl,” “Opposites Attrac,t, “Rush Rush” and “Cold Hearted” – just to name a few. In her three-decade career Paula has sold over 60 million records, had six number one songs, earned seven MTV Awards, a Grammy Award and two Emmy Awards.

As one of the most celebrated pop icons in the world, Paula Abdul is best recognized as an award-winning choreographer, dancer, singer, actress and television personality. Beginning her career as a cheerleader and choreographer for the Los Angeles Lakers, her talents were soon recognized and utilized by artists such as Janet Jacket and George Michael among many more. Upon launching her solo pop career in 1989, Paula exploded onto the charts with her music which ultimately totaled six number one hits and over 60 million records sold, becoming an American pop pioneer and multi-platinum recording artist with legendary music videos to the MTV generation.

Paula Abdul is also recognized for her nine-season run as an original judge on the global sensation television series American Idol, which were followed by her presence on The X-Factor and So You Think You Can Dance to name a few. Among Paula’s many accolades she has earned two Emmy Awards, two GRAMMY Awards, and three American Music Awards. In 2017 Paula returned to the stage for the nationwide Total Package Tour preforming in over 40 cities. When not lending her talents to the stage & screen, Paula is an active spokesperson and advocate for the American Humane Association, Turnaround Arts, Avon Foundation, GLAAD, Lupus LA, Red Cross and more.