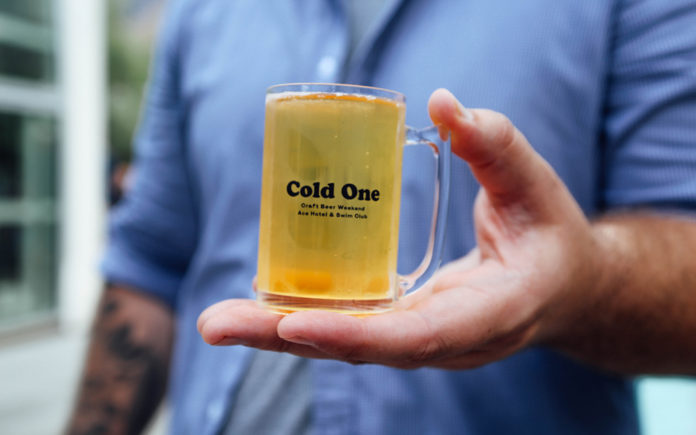 Coachella Valley residents are enduring the warmest (aka the unbearably, hellishly, hottest) time of the year right now, and we all deserve a beer to cool ourselves down. Lucky for us, Ace Hotel & Swim Club in Palm Springs, CA, is hosting their 7th annual Craft Beer Weekend this Saturday and Sunday, August 4-5, and there will be enough beer there to drown all of our sorrows.

I attended last year’s Craft Beer Weekend at Ace, and it proved to be a memorable day for quite a few reasons. Palm Springs endured a sudden thunderstorm and flash flooding that dumped over an inch of water on the city in an hour, briefly forcing Beer Weekend attendees inside the building as heavy rains quenched the Coachella Valley desert. While we can’t count on rain to fall again, we can count on this year’s event to be even bigger than the last.

Ace Hotel’s Food and Beverage Director, Paul Patino, explained the annual event, stating, “It’s become a part of our identity, we’re actually expecting this year to be our largest, with over 40 breweries represented. Ace has always been supportive of the craft beer community and culture.” Paul continues, “We have one of the largest selection of taps in the Coachella Valley available in the Amigo Room, and our annual Ace Craft Beer Weekend embraces craft brewers state-wide, but especially from Southern California. This year we even have a brewer coming in from Michigan!”

The last six years have been a period of tremendous growth for craft breweries in Riverside County. Our desert community went from having one local brewery in Babe’s Brewhouse, to three with the additions of Coachella valley Brewing Company, and La Quinta Brewing Company opening their doors. The valley is also home to three annual festivals aimed at pleasing craft beer lovers, with Indio’s Rhythm, Wine & Blues event in the spring, and the Props and Hops Craft Beer Conclave occurring at the Palm Springs Air Museum every fall.

Prior to becoming a professional craft brewer (and beer columnist), I was an EMT who enjoyed entering amateur homebrew competitions like Props and Hops and attending all the craft beer festivals that I could get tickets to. Of the valley’s three annual beer-events, Ace Hotel’s Craft Beer Weekend always seemed to me to offer the greatest value, selling tickets at prices more affordable, and offering more pours to customers. When asked if this was a conscious decision on the part of Ace, Paul Patino shrugs and offers, “The thought behind Ace’s Craft Beer Weekend was always to keep it easy and simple– who wants to count tickets? With our price point and unlimited tastings, it keeps the event fun and allows our guest to meet more brewers and to try more of the product. The aim of the craft beer weekend is to educate the person who might not be aware of the culture and the community associated with the art of beer making. The festival allows them to experience that.” 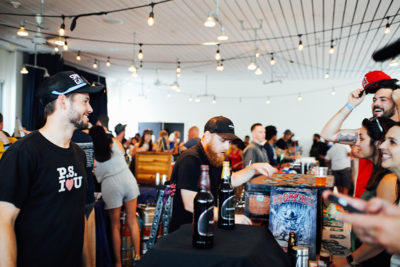 Sunday the 5th will see Ace Hotel hosting a beer brunch from 11am to 1pm, with 6 dishes all paired with beers from renowned brewery, Mikkeller. The menu lists steak & egg, bacon & egg, pigs in a blanket, deviled eggs, pannequet, and frosted cinnamon bun as the offerings to be paired with ales that compliment and contrast the flavors of the food.

Tickets for the event can be purchased online at acehotel.com/craftbeer by clicking on the palm springs location, then finding the event calendar and searching for the date, august 4th. They can also be bought day-of at the hotel, but that’s living dangerously. That’s for people who go to the DMV without an appointment. That’s for people who don’t like to reserve their movie seats ahead of time. I don’t like those people.

I’ll be attending and celebrating Ace Hotel’s Craft Beer Weekend, so If you see me there, please come up and say hello!