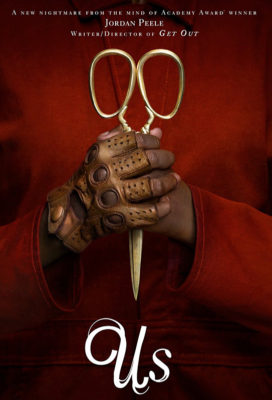 The trailer alone is unexpected, unsettling and seriously disturbing, a catalyst for nightmares.  And writer director Jordan Peele’s (“Get Out”) sophomore horror film is even better.  But what’s rally great about writer Peele’s horror film is the jaw-dropping performance from leading lady Lupita Nyong’o that pushes everything into a modern horror classic category.

Inspired by the 1960 “Mirror Image” episode of Rod Serling’s first season The Twilight Zone, this intelligent, clever and provocative exercise in horror filmmaking delivers as many laughs as scares.  In fact, the laughs may be even more potent than the scares.

The opening scenes make it clear that the continental United States (U.S.) is riddled with abandoned underground railways and mine shafts that crisscross the country.  But what is the meaning of this haunting metaphor, if metaphor it is? 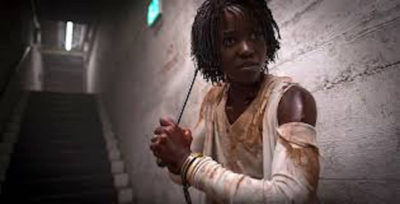 The basic storyline has Adelaide Wilson (Nyong’o), accompanied by her husband, son and daughter returning to her childhood beachfront home.

Haunted by a traumatic experience from the past, Adelaide grows increasingly paranoid and fearful that something bad is about to happen.

When darkness falls, her worst fears become a sobering reality as the Wilsons encounter the silhouette of four masked figures holding hands in their driveway.

When the masks come off, the family is horrified to discover that each attacker has the appearance of one of them!

Now an endearing American family against is pitted against a terrifying and uncanny opponent: deadly doppelgängers of themselves!

Don’t miss this diabolically creative and fearsomely entertaining post-modern horror film; it’s nightmarish, and unsettling.   It may be about something more than identity, repression and the American experience.  Whatever it’s deeper meaning, it is certainly a film open to serious discussion and interpretation.  A perfect example of why movies matter in our current chaotic culture.  See it.  And see it again. 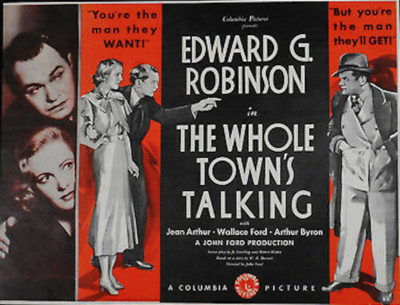 On it’s initial release, the New York Times said it was “the best of the new year’s screen comedies.”  Robinson plays double roles as a mild-mannered clerk and a notorious gangster who just happen to look remarkably alike.  Trouble of course ensues, along with a delightful screwball romance featuring a delicious jean Arthur.  The movie was adapted from a story by W. R. Burnett who also wrote the source material for Robinson’s 1931 breakthrough film, Little Caesar. 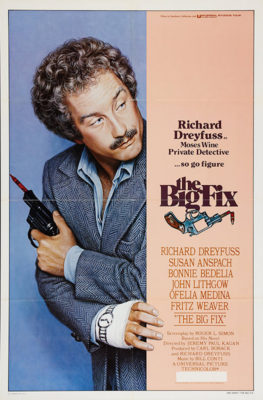 Fresh off the dazzling double-header of 1977’s Close Encounters of the Third Kind and The Goodbye Girl, the appealing and resilient Richard Dreyfuss stars in and co-produced this clever mystery caper about Moses Wine, a divorced–dad L.A. detective navigating the treacherous paths of his radical past and the cooler reality of his working-stiff present when he tackles the potentially explosive case of political sabotage when he’s contacted by ex girlfriend Lila Shea (Susan Anspach) about defending a candidate for California governor.  Bonnie Bedalia, John Lithgow, F. Murrray Abraham and Fritz Weaver offer sterling supporting backup under Jeremy Kagen’s competent direction.  Bill Conti supplies the evocative 70’s score.  Twilight Time Movies. 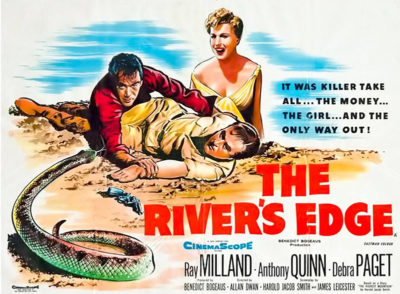 Two Oscar©-winning actors square off in a tension-packed action thriller (partly shot on starkly beautiful Mexican locations) and with regard to one of them; “Ray Milland has never been nastier” (Leonard Maltin’s Classic Movie Guide).  From veteran 50+-year director Allan Dwan comes a marvelously bracing and lean sunbaked noir in its masterly composed Cinemascope hi-def debut.

Anthony Quinn and Debra Paget star as a young couple coping with the rough life on a New Mexican ranch, as if thy didn’t need more troubles, her former lover, a sleazy bank robber on the run – played by Milland with shocking ferocity – turns up, forcing them to escort him across the border to Mexico with his ill-gotten gains.

Director Dwan guides the suffocating tangle of emotions through the acrid haze of frenzied passions in a few slashing brushstrokes he capturing the “ecstatic horror of life on the edge.  For more info on this limited edition, go to: screenarchives.com.