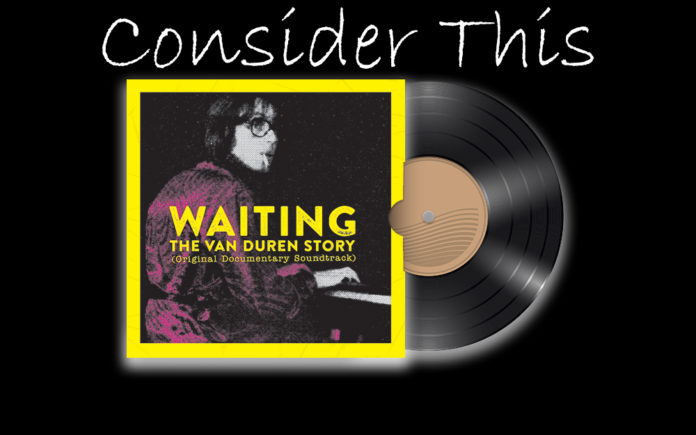 Probably the biggest rush for any music lover is discovering new music. A new musical obsession can almost wipe away your worry and distract from your trials and tribulations. It’s especially bittersweet to encounter music from a musician who has been around for decades, but never really gotten his due. Such is the case for Van Duren.

Van was born in Memphis, Tennessee in 1952. Just like most of his generation, he had his mind blown when the Beatles played the Ed Sullivan Show. Not long after, he took up guitar and started his first band, the Manor Serfs. By the time he was in college he split his time between music and matriculation. But music won out, and he quit Memphis State University, intent on staging a Rock-flavored adaptation of “The Fantastiks.” It was around this time that he met Jody Stephens, drummer for the seminal Memphis band, Big Star.

Soon, Van was spending time at Ardent Recording Studio. Big Star featured ex-Box Top Alex Chilton, troubled wunderkind Chris Bell, and bassist Andy Hummel. In 1972, the band had released #1 Record, a nearly perfect debut which was all but ignored by mainstream radio. Chris Bell was crushed by the failure and quit. They soldiered on as a three-piece recording a follow-up, Radio City a year later. Critical acclaim was unanimous, but the World at large wasn’t paying attention.

In 1975, Van auditioned to take Chris Bell’s place on guitar, but Big Star was on the verge of calling it quits. Not long after, he began recording demos at Ardent with Jody behind the drum kit. Somehow, Andrew Loog Oldham (the Rolling Stones’ manager from 1963 to 1967), heard his stuff and ended up producing several songs for him. While Andrew shopped the demos to different labels, Van joined a short-lived band called The Baker Street Regulars that featured Chris Bell and Jody Stephens. Following their dissolution, he played in Giant and then spent several years working as a session musician.

Finally, in 1977, a new label, Big Sounds Records, showed some interest in Van Duren’s music and he relocated to Connecticut, to record Are You Serious. He played all the instruments himself, except drums. Released in 1978, it garnered excellent reviews and some regional airplay. A North American tour followed and he headed back into the studio to record a sophomore effort, Idiot Optimism. Although it was scheduled for release in 1979, it was shelved when Big Sounds was swallowed up by another label. (A Japanese record company finally released it in 1999).

Returning to Memphis, he formed a band called Good Question, releasing two studio albums in 1986 and 1991. A collaboration with multi-instrumentalist Tim Horgan, culminated In the 2012 album, Her Name Comes Up. He also joined forces with another Power Pop stalwart, Tommy Hoehn, the duo cut two albums at Ardent studios in 1999 and 2002. Sadly, plans for a third album were interrupted by Tommy’s ongoing health Issues. He lost his battle with cancer in 2010.

Van reignited his solo career releasing Open Secret in 2005 and Resonance Road five years later. The latter veered away from the Power Pop paradigm into more experimental territory. A collaboration with Vicki Loveland resulted in a pair of albums, 2013’s Bloody Cupid and 2016’s Next.

Meanwhile, on the other side of the world, Wade Jackson and Greg Carey were introduced to Van Duren’s music and became obsessed. Instead of just wondering why Van’s music wasn’t more celebrated, they decided to make a documentary about him. The fact that Wade was a musician, Greg, a band manager and they lived in Australia, didn’t deter them.

The film, Waiting – The Van Duren Story has recently begun making the rounds at film festivals. Omnivore Recordings has combed the Van Duren vaults and released a companion CD and LP. The 12-song set gets off to a rollicking start with “Grow Yourself Up.”

Pummeling drums connect with supple piano and organ, as Van insists “Don’t give me lame excuses, I won’t believe a word you say,” guitar and bass chime in and the result is sheer AM Pop perfection. Dismissing a wayward girlfriend, he notes “I’m not the fool you wanted, I’m many things you’ll never know.” Stately piano wells up before the bridge, chunky organ runs and spirally guitar round the finish line before the kaleidoscopic freak-out coda.

That song and three other equally assured tracks are culled from his 1977 debut, Are You Serious. Take “Positive (Wedding Song),” a wistful piano ballad, it features a carefully calibrated backbeat, churchy organ and ecclesiastic backing vocals. Lyrics like “Love is the reason I’m here today, hope is the feeling, the tears in our eyes convey/Down the line, we’ll look back on this and smile, I’m positive” offer a tender nuptial encomium. Had it gotten more exposure, it might have become the go-to wedding song of the ‘70s. (Supplanting that drippy “There Is Love,” eat it, Paul Stookey).

“Chemical Fire” is a Glam-tastic boogaloo that employs spatial percussion, whooshy guitars and bedrock bass lines. Lyrics chart the course from romantic cynicism; “It’s been so long since I gave a damn, it’s so un-rewarding..” to the spontaneous combustion of instant attraction; “Something told me when you caught my eye that I had to inquire/As we talked something grew inside like a chemical fire, it’s burning out of control.” The guitar solo on the break is suitably incendiary.

Meanwhile, “Waiting” is a lush lament that catches those quicksilver moments of epiphany that arrive “between insomnia and daylight.” Plaintive piano gives way to Van’s yearning tenor. As drums and strumming bass kick in, the ache of unrequited love is palpable. As he bides his time, “finding a meaning in loneliness” twinkly piano and phased synthesizers lock into a gauzy pas de deux.

Two tracks, “Tennessee, I’m Trying” and “Make A Scene,” crop up from Idiot Optimism, his unreleased sophomore effort. The former is a shimmery crowd-pleaser. A hopscotch beat cushions sugary guitars and serpentine bass. The song has a prickly Pub Rock vibe that shares some musical DNA with the Elvis Costello song, “Pay It Back.” Guitars jangle, see-saw and sting underscoring Van’s hometown malaise; “Blue and sad-eyed, looking outside for the morning mail/Holding on, holding back so much love for tomorrow’s reply…Tennessee, I’m trying, dying to be everywhere at one time.”

The latter is a loving cover of a Chris Bell song that had been been recorded for his upcoming album, I Am The Cosmos. Sadly, Chris would never live to see his solo debut released, as he was killed when he lost control of his Triumph TR7 sports car, hitting a power pole just a couple days after Christmas in 1978. Van’s version is slightly frenetic, blending slashing guitars, rumbling bass and a handclap beat. His scratchy vocals and ooky theremin-esque synths collide with a scorching, Chuck Berry style guitar solo.

A couple of tracks originate from a live, WCFM broadcast from Rochester, New York. “Yellow Light” is equal parts fastidious and shambolic. Van’s stream-of-conscious lyrics crest over an off-kilter rhythm, growly guitars, slinky keys and authoritative bass. “Torn In Half” matches mad scientist synths that blink and bloop, snaking around a tumbling beat before downshifting into an urgent Rocker.

The real gems here have remained unreleased until now. Actually, a version of “Andy Please” appeared on Idiot Optimism, but this version, credited to Duren Stephens, has a loose-limbed appeal. Rippling piano connects with sunshiny guitar, speed-shifting synths and stacked harmonies. The candy-coated crunch of the arrangement nearly camouflages lyrics that comment on a one-sided relationship; “Andy, can she mean so much, I’m aware of the love you’re going through, Andy please, anyone can see she’s breaking your heart in two.”

“Just You Tell Me,” recorded live in Ardent studios in 1981, bristles with authority. Cascading piano notes cross ricochet bass lines and a stop-start rhythm. Van’s commanding vocals are front and center as he unspools a verbose treatise on emotional confusion; “I call attention to the misapprehensions that no one even mentions, and I’ll say they seem to go with a snow that falls ‘til it turns to rain.”

Back in the 1970s, Van Duren had the potential to be as big a hit-maker as Todd Rundgren, Badfinger, Harry Nilsson or the Raspberries, but the record industry somehow missed the boat. Even though fame eluded him, he never stopped making music, he has truly persevered. Thanks to the efforts of first-time filmmakers Wade Jackson and Greg Carey, and the support of Omnivore Recordings, now the world is able to discover what a select few have always known.